She Couldn’t Quit Smoking. Then She Tried Juul.

Try as she might, Brittany Kligman couldn’t free herself of a pack-a-day cigarette habit, eight years in duration. And she ached to.

She was mortified the time that a taxi driver sniffed as she entered his cab and remarked, “You’re a smoker, huh?” (And she had just showered!) She was getting more sinus infections. Because her chest felt uncomfortably tight when she exercised, she stopped high intensity interval training. Then SoulCycle classes. Finally, she quit working out.

Then Ms. Kligman, 33, tried Juul, the sleek vaping device she credits for her liberation. Since last January, it’s been hello nicotine salts, goodbye tar. Juul gave her everything she enjoyed about cigarettes — the nicotine jolt as well as something ritualized to do with her hands — but without the stink, the stigma and the carcinogens.

“The last cigarette I smoked was on July 5 when I ran out of pods,” Ms. Kligman said, referring to cartridges of mango-flavored liquid, as she took discreet hits while chatting at a downtown Manhattan cafe. “I couldn’t finish it — it made me sick. And I thought, ‘How did I used to do this?’ ”

But this week, under pressure to keep its products away from teenagers, Juul announced it was suspending sales of many of its flavors (including Ms. Kligman’s beloved mango) at retail stores. The next day, the Food and Drug Administration issued new requirements that stores can only sell flavored e-cigarettes from closed-off spaces that are inaccessible to minors, a stipulation that could force many outlets to stop carrying the products. The new restrictions make smokers-turned-vapers like Ms. Kligman uneasy.

“If you’re going to sell an adult product, you have to be prepared to secure it,” she said. “But it also seems like they’re making a lot of steps and loops for people like me. They’re taking away a flavor I used for smoking cessation. ”

She not only intends to stock up on mango at her corner smoke shop, but is working up a Plan B: “I’ll switch to Juul’s tobacco flavor. I can get around this. Just like the kids will — they can always find a way.”

Nicotine, the chemical in tobacco cigarettes that creates the addictive stranglehold that is so difficult to break, is most likely a signature reason that Juul and other e-cigarettes help former smokers like Ms. Kligman quit. In making the switch, smokers can satisfy their nicotine hunger without inhaling the dozens of cancer-causing carcinogens released by a burning cigarette.

Juul in particular may work better than nicotine patches and gum not only because of the amount of nicotine in a Juul pod, but because an e-cigarette’s means of delivery — into the lungs and brain — is more immediate than through skin or saliva. Although studies of e-cigarettes are increasing, they, like the devices themselves, are still in the early stages. The first e-cigarettes arrived in the United States around 2006, but most versions now on the market are far more recent.

And while these products were conceived as smoking alternatives, the Food and Drug Administration has not yet formally approved them as smoking cessation aids, and research is mixed about their effectiveness. 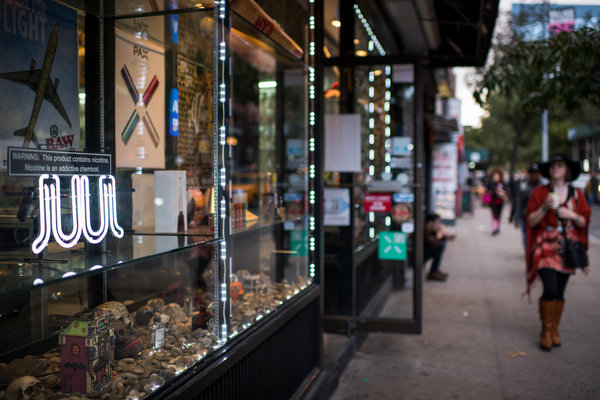 The Centers for Disease Control and Prevention suggest that they can be effective in helping smokers quit “if used as a complete substitute for all cigarettes and other smoked tobacco products.” Like Ms. Kligman, about 30 percent of adult users do exactly that, but nearly 60 percent use both, the C.D.C. said.

According to a national health survey released earlier this month by the C.D.C., the number of adult cigarette smokers in the United States dropped to about 34 million last year, while the number of adult e-cigarette users rose to about seven million. But the report didn’t find sufficient evidence to link the two.

Though e-cigarettes are supposedly safer in most respects than combustible cigarettes, they are not benign. Nicotine is not known to cause cancer. It can induce feelings of pleasure and alleviate stress. But in addition to its powerful addictive properties — researchers suggest that the average smoker tries to quit 15 times over a lifetime, with many as much as 30 — nicotine can irritate bronchial pathways and raise heart rates.

According to a 2018 comprehensive evaluation of e-cigarettes by the National Academies of Sciences, Engineering and Medicine, the products are particularly challenging to study because mechanisms and content vary widely. The report said that in addition to nicotine, the long-term effects of the products’ metals, chemicals in the aerosol and flavorings could be problematic. 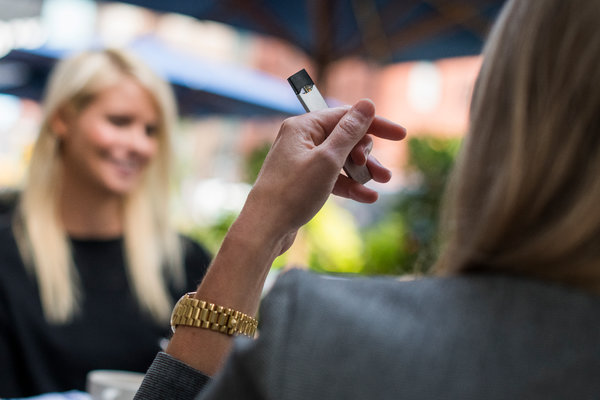 Now regulators are struggling with how to address competing concerns — weighing the benefits of e-cigarettes for tobacco smokers against the risks for cigarette-naive adolescents, whose developing brains are especially vulnerable to nicotine. The overwhelming majority of smokers start as teenagers, but Ms. Kligman began smoking at 25, when she was a graduate student in biomedical science. Still, the moment of induction seemed purely adolescent: She and her sister wanted an escape during a soporific visit to their grandparents.

After smoking one cigarette, Ms. Kligman felt sweaty and nauseous. So she tried a second.

She began smoking every chance she got. It swiftly became a soothing oral fixation. When she felt nervous at parties or bars, cigarettes gave her an excuse to step outside. Moving to New York from Atlanta, she found that the people she was befriending were smokers. Defiantly, they stood in solidarity when nonsmokers made withering remarks.

Of course she was well aware of the health risks. She’s a medical researcher. Doctors have been in her family for generations. One boyfriend announced that she couldn’t smoke around him. “It caused me stress,” Ms. Kligman recalled, “because I craved the nicotine when I was with him and I couldn’t get it. ”

She tried so many ways to quit: Rationing cigarettes. Cold turkey. Nicotine gum. A boyfriend even bought her an unwieldy, old-school vape. It leaked and didn’t fit in her purse — a nonstarter. Then, a prescription for a smoking cessation medicine.

But she never had a strategy — chewing straws? doing push-ups? — to substitute when the urge to smoke came on. Each time she abstained, the irritability overwhelmed her.

She told herself: “At least it’s nicotine and not heroin.”

Last January, at a dinner party, she asked a good friend to join her outside for a smoke after the meal. Four people at the table said, “We don’t smoke anymore. We Juul.”

Embarrassed that she was still smoking, she tried a hit of someone’s Juul. She was underwhelmed, but allowed that it sort of worked. The next day she bought one. She used it for four days, then put it in a drawer and went back to cigarettes.

A month later, for a weekend visit to her friend Amy’s cottage upstate, she packed the Juul. It was seriously cold outside. When she needed a cigarette break, another guest, a runner, intervened, saying, “Just Juul inside!”

She spent that weekend indoors, juuling nonstop to get a constant “nic fix.” “I began to think, ‘This is working. It’s really working!” And it was so easy.

Back at home, she tried a cigarette. Gross.

So she continued to vape. For weeks she coughed up murk and muck that had attached to her airways. And then … it stopped.

Now her eyes are clear. Teeth gleam. Skin looks rejuvenated. And the money! The cigarette brand she smoked daily was about $17 a pack; a package of four cartridges could run about $17. Making the switch put back about $85 a week in her pocket. With the savings, she recently bought a celebratory pair of running shoes.

She now vapes about the same amount that she had smoked — a cartridge a day, roughly the nicotine equivalent to a pack. Soon she plans to try Juul’s new lower-nicotine cartridges, hoping someday to be completely weaned. The device has overtaken her life much as cigarettes had. “I’m a hard-core Juuler,” she said.

Almost all her friends vape now. Sunday mornings at Amy’s cottage — six friends sitting around with mimosas, fresh-baked cinnamon rolls and Juuls. They have group texting chats, sending around Juul memes and news, sharing pictures of the latest accessories, like the casing wraps and charging stations. They shrug off health concerns that are being raised about e-cigarettes.

Only one friend has quit vaping. He was going through three pods a day and landed in the hospital with a rapid heartbeat. Doctors said the cause was excessive nicotine.

“His husband smashed the Juul with a hammer and told him never to vape again,” Ms. Kligman said.

“So he went back to smoking cigarettes.”