No wonder we have a GP crisis! NHS figures reveal nearly 6million appointments were missed in the first five months of 2018 because patients didn’t bother turning up

More than one million GP appointments are missed each month because patients don’t bother to turn up, NHS figures have revealed.

The Royal College of General Practitioners today urged patients to let their GP surgery know ‘as soon as possible’ if they can’t attend their appointment. 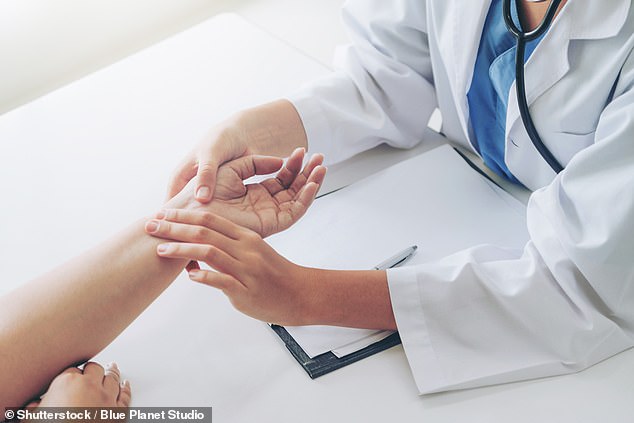 Professor Helen Stokes-Lampard, chair of the RCGP, said: ‘Today’s data also shows that many patients are not attending appointments when they have made them.

‘There can be a number of reasons for this, and in some cases a patient not attending an appointment can be an indication that something has gone wrong.

‘But this waste of resources is frustrating, and we would urge patients to let us know if they can’t attend as soon as possible.’

She added that informing the GP surgery would allow over-stretched doctors to ‘offer that time to someone else who really needs it’.

The NHS figures, collected every month, show around 116million GP appointments were made between January and May.

The NHS will offer Australian doctors a ‘relocation package’ of up to £18,500 to move to the UK as it tries to hire more GPs to battle a staffing crisis, it was reported in October.

The health service will target GPs who previously left the UK for Australia and are looking to return home, as well as Australian GPs who want to live in the UK.

NHS England’s director of care said the UK was ‘pulling out all the stops’ as it tries to bring in doctors from a country where training and quality are as high as at home.

Doctor recruitment is being widened to Australia after the NHS received applications from more than 1,200 GPs in Europe.

‘So it makes sense to head to Australia where doctors’ skills, training and high levels of care closely match those of their British counterparts.

However, statisticians behind the figures believe the true figure is closer to the 130million mark because not all GP practices are included.

Of the known appointments made, 5.8million were classed as missed – meaning patients don’t turn up to around one in 20 consultations.

Data showed slightly more than 115million GP appointments were made in the five months between June and October.

But the figures have not yet been jotted up to work out the proportion of patients who missed them. However, it is likely to be similar.

Frustrated GPs have for years touted the controversial idea of fining patients if they fail to turn up to their appointments.

And surveys have shown the majority of Britons support fines for people who miss GP and hospital appointments to boost NHS funding.

A proposal to even charge patients £5 in the hope of deterring them from seeing their GP was even put forward to the British Medical Association this summer.

Official figures showed in February that 41 per cent of GPs – around 10,000 doctors – are 50 or over and are expected to quit within the next five to ten years.

Many are retiring in their 50s, moving abroad or leaving to work in the private sector, increasing the pressure on those who still work in the sector.

Record shortages are leaving patients with ever-longer waiting times, and make it far more difficult to see the same GP each time.

Despite an NHS a £2.4billion plan to recruit 5,000 extra GPs by 2021 and cut a staff shortage, numbers of family doctors are falling.

Fewer young doctors are choosing to specialise as GPs, and are opting for more ‘macho’ career paths as surgeons or specialists.

Pressures faced by doctors also include a rising number of patients, some with multiple complex health conditions.

This has led to concerns that the average consultation time of 10 minutes in the UK – thought to be the shortest in the developed world – is simply not enough.

More than 2.5 million patients across England could see their GP surgeries close in the next five years, experts revealed last week.

The Royal College of General Practitioners said 762 practices in the UK are at risk of closing within the next five years because at least three quarters of their doctors are aged 55 or over and approaching retirement.

Experts said so many closures would have a ‘catastrophic’ effect on the health service.

Appointment waiting times could get even longer, workloads would grow and more people could end up queueing at A&E for minor illnesses.

Campaigners warned the potential closures would be ‘dangerous’ for patients and are calling for ‘drastic action’ to encourage new GPs to join the profession.

The situation is worst in Southend in Essex, where 13 of the area’s 35 GP practices are at risk of closing, potentially affecting nearly 39,000 patients.

A third of surgeries in the London borough of Havering could shut down, and more than 85,000 patients could lose their GP in Sandwell and West Birmingham.

Only around a quarter of areas of England have no practices at risk of closure, according to the RCGP’s estimates.