NHS trust uses children of staff in campaign against violence

‘My mummy is a nurse, please keep her safe at work’: NHS trust uses children of staff in hard-hitting campaign against violence

The North Tees and Hartlepool NHS trust, in North East England, is using the images of its own staff’s children to try and reduce violence.

More than one in six workers at the trust (15 per cent) say they have experienced violence from patients, relatives or the public over the last year.

And, as another busy winter approaches, bosses have launched the campaign promoting their zero-tolerance approach to ‘unacceptable’ abuse. 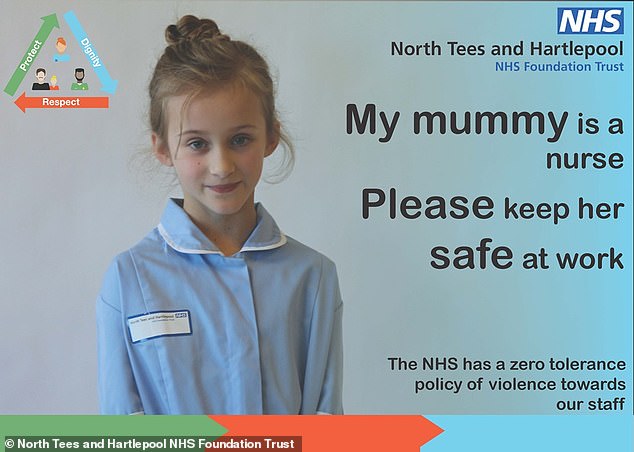 The new poster campaign, by the North Tees and Hartlepool NHS Foundation Trust, features pictures of staff’s own children to encourage people not to attack health workers

‘Unfortunately, there has been an increase in reported incidents of violence,’ Julie Gillon, the trust’s chief executive told Nursing Times.

‘I hope this campaign acts as a reminder to members of the public that staff work incredibly hard and it is completely unacceptable for them to be subject to any form of violence or aggression.’

As part of the campaign all security staff have already been given body cameras to use so the health service can prosecute people who become violent.

A law change is coming soon, too – this month, the maximum prison sentence for someone who attacks a member of NHS staff at work will double from six months to a year.

The campaign features workers’ children dressed in uniforms like their relatives’, with slogans such as ‘My mummy is a nurse. Please keep her safe at work.’

Bosses at the trust, which runs the University Hospital of North Tees, say staff report facing more and more disorder, intimidation and abuse at work.

Ms Gillon added: ‘I am committed to ensuring the safety and wellbeing of all staff who work in our hospitals and community settings.

‘This includes protecting them whilst they deliver care to the people of North Tees and Hartlepool.’

One of the children in the posters, Oliver, is the son of Kara Pickering, a communications assistant.

His poster says: ‘My grandad is a porter. Please keep him safe at work.’

Ms Pickering said: ‘Seeing my little boy dressed up in scrubs really sends home the message that there’s a human being behind the uniform, many of whom have their own children at home. 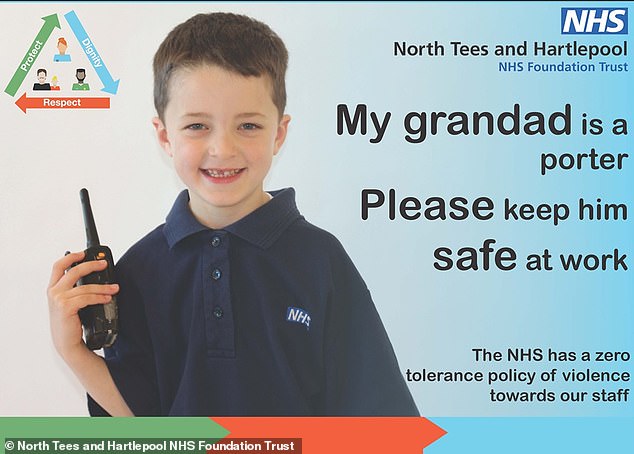 Kara Pickering, a communications assistant whose son, Oliver, is in one of the posters (pictured) said: ‘Seeing my little boy dressed up in scrubs really sends home the message that there’s a human being behind the uniform, many of whom have their own children at home’ 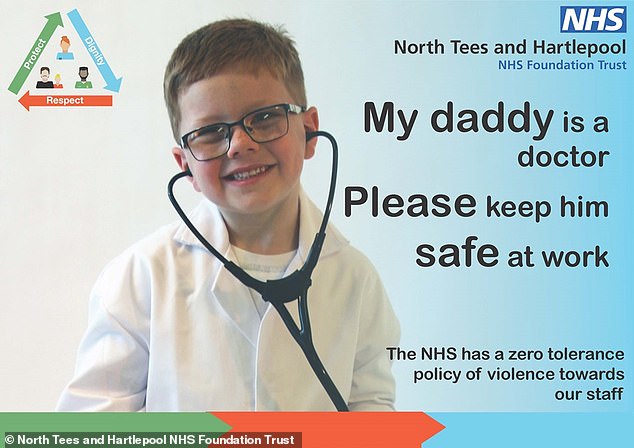 The campaign comes after the number of violent attacks on staff was reported to have nearly doubled between 2015 and 2017 at the trust, with 15 per cent of staff saying they had experienced violence 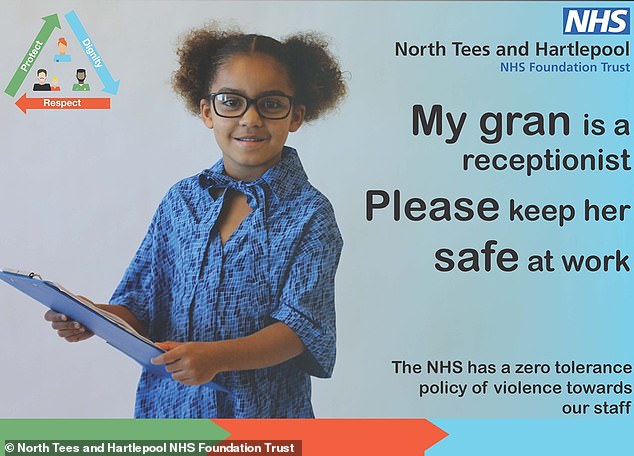 The chief executive of the trust, Julie Gillon, said: ‘I hope this campaign acts as a reminder to members of the public that staff work incredibly hard and it is completely unacceptable for them to be subject to any form of violence or aggression’

‘I really hope that other people recognise this too, and that the campaign makes a real difference for those who just want to care for their patients.’

The move comes after figures in April revealed there were as many as 200 attacks on NHS staff every day in 2016/17.

Staff working at hospitals with long waiting lists, financial problems or those with A&E departments were found to be most likely to experience violence.

There were nearly 19,000 incidents in hospitals with A&E departments in that year, which experts called ‘worrying’, saying it’s ‘no accident’ more attacks occur where pressures are more extreme.

Violent assaults on NHS staff rose by 10 per cent in a year – partly driven by frustration with waiting times.

Staff in hospitals with long waiting lists, A&E departments or financial problems were most likely to suffer violence, according to a report by the union Unison and the Health Service Journal.

Unison’s Sara Gorton described the figures as ‘worrying’, adding: ‘It’s no accident that trusts where the pressures seem the most extreme – where there are huge financial deficits or where it’s a struggle to meet growing demands on services – have seen the steepest rise in the number of attacks.’

Attacks on staff in hospitals with emergency departments jumped by 22 per cent, with nearly 19,000 incidents.

And assaults rose by 36 per cent in hospitals where more than one in 10 patients waited for at least 18 weeks for elective procedures.