Mother reveals her baby died four days after getting meningitis

A heartbroken mother has revealed her six-week-old son died just four days after being struck down by meningitis.

Georgia Higginbottom cradled her baby, Oscar Nally, for eight hours until he died, after his life support machine was switched off.

Miss Higginbottom’s only child had no visible symptoms of meningitis, such as the tell-tale rash. She took him to hospital after hearing a ‘shrill cry’.

Pictures from a scan showed ‘every single part of his brain was black’, and he was diagnosed with Group B streptococcal meningitis, the main cause of meningitis in babies.

Ahead of Oscar’s funeral today, Miss Higginbottom, from Blackpool, is warning other parents to be vigilant and spot the signs of meningitis. 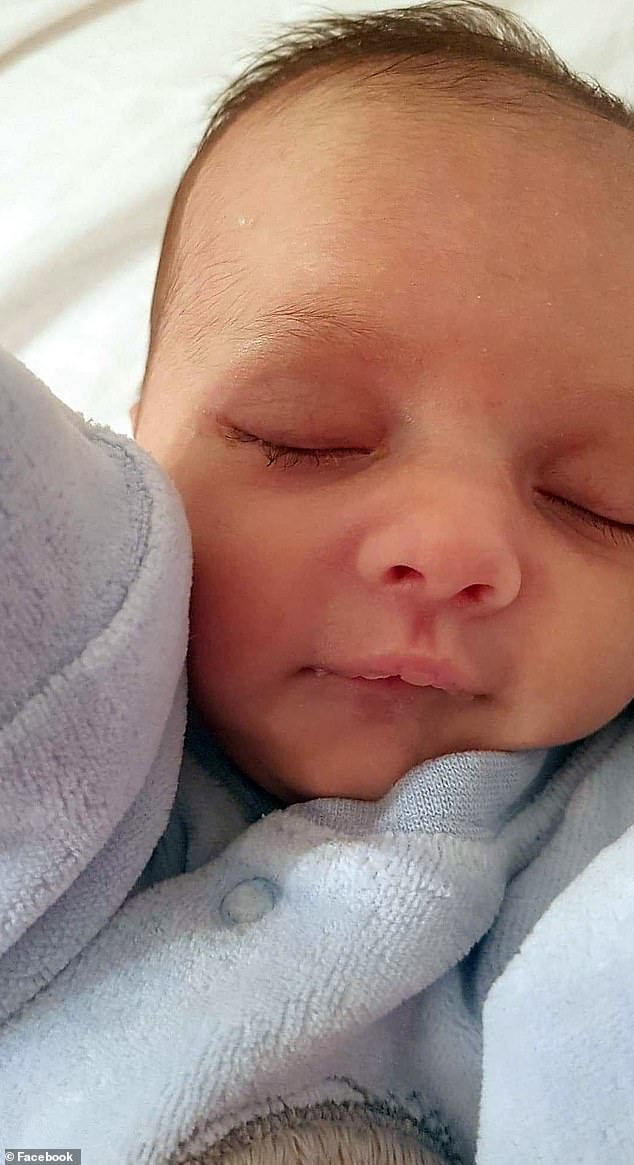 Six week old baby Oscar Nally died after getting Group B streptococcal meningitis, four days after being admitted to hospital. The infection is contracted from the mother

The 21-year-old said: ‘We just feel empty and numb. It’s horrible. A part of our hearts is gone.’

Ms Higginbottom added it’s ‘really important’ to keep an eye out for meningitis. She said: ‘I did not realise how serious this disease was.

‘He was really poorly and, if he had survived, all he would have been able to do is breathe, and that’s not a life. I did not realise how serious this disease was.’

Oscar was born two weeks premature on Friday, September 28. He was taken to Blackpool Victoria Hospital with a suspected infection a month later.

His condition improved after he was given antibiotics through a drip and, two days later, he was allowed home.

He seemed ‘good in himself’ and like ‘just a normal, typical baby’ but, two weeks later, on Friday, November 9, Oscar suddenly became ill again.

Miss Higginbottom’s mother, Sharon Smith, 45, said: ‘In the morning, I was playing with him.

‘Georgia fed him at noon, by 12.30pm he was in the walk-in centre fighting for his life.

‘Within seconds of us putting him down, he woke up with a cry; a shrill cry. It was horrible. 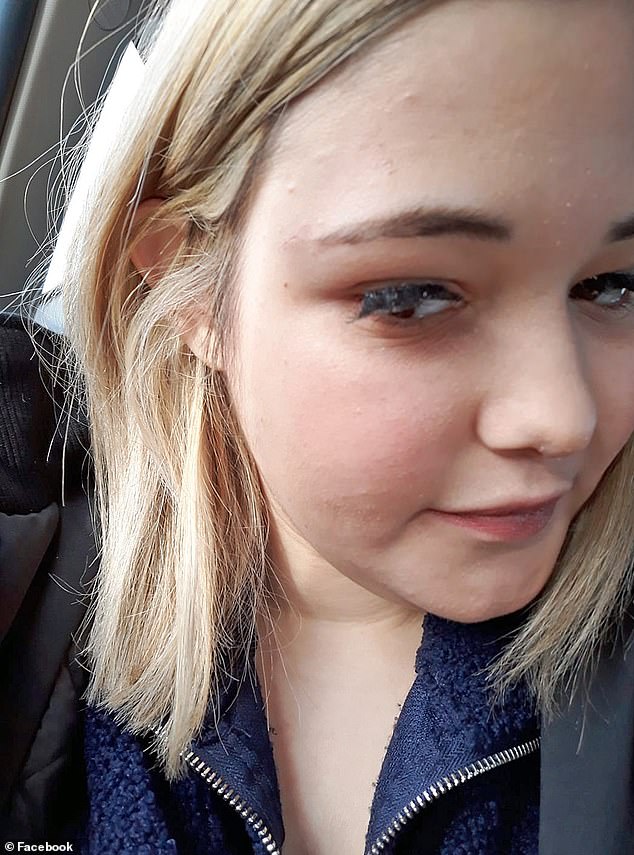 Mother Georgia Higginbottom, 21, from Blackpool, christened her baby and held him for eight hours before he lost his battle to the deadly disease 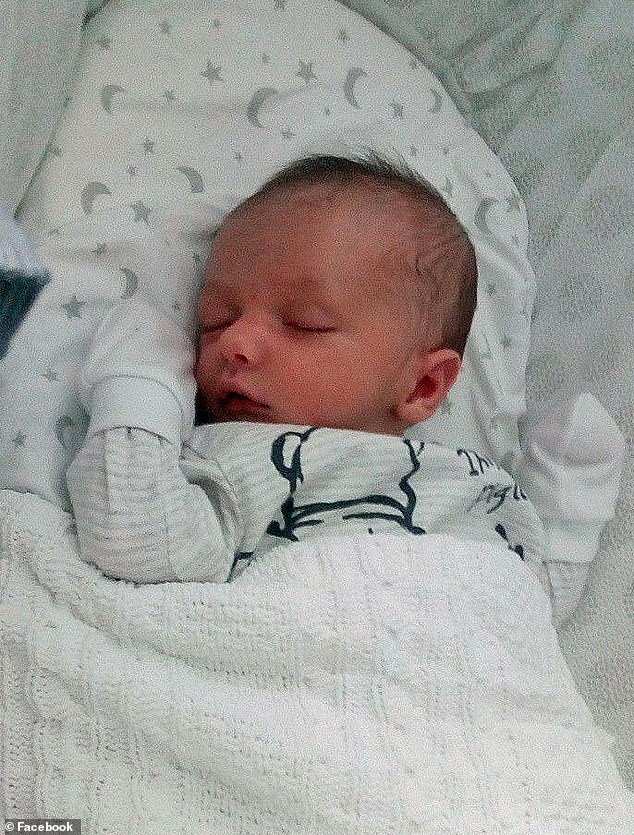 Oscar showed little symptoms of meningitis, which is hard to spot in babies

SYMPTOMS OF GROUP B STREP MENINGITIS

GBS disease is caused by the Streptococcus agalactiae bacteria, which usually live harmlessly in the intestinal tract or vagina.

About 60 – 70% of GBS disease is early onset. Early onset disease, which is usually septicaemia, occurs less than seven days after birth and is most likely due to infection being passed on from the mother before or during birth.

Late onset disease, which is usually meningitis, develops between seven and 28 days after birth and is probably transmitted when babies come into contact with hands contaminated with GBS bacteria.

What are the symptoms of GBS disease?

The signs and symptoms of meningitis or septicaemia are often non-specific at first and can be difficult to recognise in very young babies.

Trust your instincts as a parent/carer. Seek urgent medical attention if you suspect your child is ill.

‘To look at him, you would not think there was anything wrong with him. We thought he had a bit too much milk to drink or something.’

The family went to a local walk-in centre when Oscar’s breathing became ‘wheezy’ and his temperature was 39.7°C. A doctor gave him oxygen before calling ahead to the hospital.

It was at the Royal Manchester Children’s Hospital that tests confirmed medics’ suspicions of Group B streptococcal meningitis (GBS).

GBS is a bacteria that is carried by up to 40 per cent of adults, usually in the gut, without typically causing symptoms.

Around one in four women carry GBS, which can be prevented from striking a baby if she is given antibiotics ahead of labour.

One in every 2,000 babies is diagnosed with the infection, according to figures from the NHS. It can kill, and does so in around 10 per cent of cases.

Pregnant women are routinely screened for the bacteria in the US, Canada, France and Slovenia – but the NHS claims the tests are not sufficiently effective.

Oscar was given a brain scan whilst doctors broke the devastating news to his family that he would not survive.

‘I couldn’t go in the room when they were properly explaining what was wrong because I was so upset,’ Ms Higginbottom said.

‘I held him and I knew he was not right,’ Ms Smith added.

‘They showed us the pictures. Every single part of his brain was black. Georgia had him in her arms and he was fitting.’

Oscar was hastily christened and then, wrapped in his mother’s arms, his life support machine was shut down.

‘It was a joint decision because Oscar had already gone up to the angels,’ Ms Smith said.

‘He had already gone. Georgia held him in her arms from 2am until 10am when he passed away. She did not move.

‘He brought so much love into our house. Now that has been taken away.’

‘If you think there’s something wrong with your child, get them seen,’ Ms Smith added.

‘Even if it’s the tiniest thing. It’s just a mother’s instinct. We just want to try and help people.’

Steve Dayman, who founded Meningitis Now after his son Spencer died in 1982, said: ‘There are different strains of bacterial meningitis.

‘It’s a very difficult disease to diagnose and identify. In most cases, you will notice a rapid deterioration.

‘The key to all this is not to wait for a rash. Sometimes it can be a late symptom, and other times it might not appear at all.’

Oscar did not have a rash when he fell ill and, according to the charity Meningitis Now, the signs of meningitis can be difficult to recognise in very young babies.

WHAT IS A GROUP STREP B INFECTION?

Group B Streptococcus (GBS) is a bacteria that is carried by up to 40 per cent of adults, usually in the gut, and 25 per cent of women in their vaginas, without typically causing symptoms.

One in every 2,000 babies is diagnosed with the infection, according to figures from the NHS. It kills in around 10 per cent of cases.

The rate of GBS infection in newborn babies in the UK is 2.5x that of the US.

Infants can suffer early-onset GBS infections, which are much more common and occur when the infant is up to six days old, if they come into contact with the bacteria in the womb or during birth.

This causes them to develop rapid breathing problems and blood poisoning.

Late-onset GBS infections, which occur between seven days and up to three months, usually cause sepsis and meningitis.

Adults may experience infections of the:

The treatment for sufferers of any age is IV antibiotics.