Is drinking too much water bad for you? 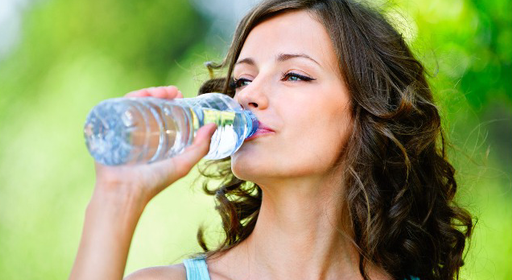 Max Freeman-Mills explains why overshooting the recommended two litres per day can do more harm than good.

Modern health trends come and go, but one piece of advice that doesn’t ever seem to change is that we should all be drinking as much water as possible. As it turns out, though, there are hidden dangers to this most innocuous of activities – the spectre of “water intoxication”, hydration’s potential sting in the tail.

Headaches, nausea, fatigue – all of these symptoms are associated with dehydration but can also rear their heads if you’re over-hydrated, as it turns out. The scientific word for the issue is hyponatremia but the condition is really rare, especially if you’re not an endurance athlete.

Essentially, over-hydration is when you take on more fluid than your kidneys can process and remove. It can be dangerous and even fatal in the most extreme cases. “Watering down your blood [makes] it harder to carry nutrients, send brain signals and control the muscles,” says Harry Aitken, a qualified sports scientist at Auster.

Over-hydration can particularly crop up during exercise, as people try to gulp down the water they’re losing through sweat. “People have a tendency to replace the water but forget the sodium losses,” say Dr Ricardo Da Costa, a nutrition lecturer at Monash University. Da Costa says that rehydration is all well and good, but without sodium to balance the equation, the change to the composition of our plasma can be problematic.

The risk of over-hydration is still relatively slim for most people, though. As Johanna Hignett, an advisor to the Natural Hydration Council, explains: “You would need to drink extremely large quantities, in the order of five litres or more within an hour” to be at risk of hyponatremia. In normal life you’re unlikely to be chugging as much as that.

What are the symptoms?

Hyponatremia causes the sodium in your body to become diluted, and when this happens, your body’s water levels rise, causing your cells to begin to swell. This swelling can cause many signs and symptoms, from mild to life-threatening.

A person who is consistently drinking too much water may experience nausea and vomiting, headaches, confusion and loss of energy. In more extreme cases, it can cause muscle weakness, spasms or cramps, seizures and can even result in coma.

Experts advise that anyone who develops severe signs and symptoms of hyponatremia should seek immediate emergency care.

How can you avoid over-hydration?

The steps to avoid reaching the point of over-hydration involve some relatively obvious reversals of normal practice. If you’re monitoring the colour of your urine, as some people do, you should be aiming for a light yellow colour, rather than shooting for as clear pee as possible – which many people assume means the peak of hydration.

Urine shouldn’t be entirely clear and, if it is, you might be drinking more water than you need. Hignett says the ideal shade for most people is “a pale straw colour”.

People who drink too much water while taking part in marathons, ultra marathons, triathlons and other long-distance, high-intensity activities are at an increased risk of hyponatremia, so if you’re rehydrating after exercise, consider taking it slower than usual.

If you notice yourself taking time to return to normal service after working out, try drinking a sports drink, as the sodium content can help you to find your balance again.

At the 2002 Boston Marathon, a study found that 13% of participants demonstrated the symptoms of hyponatremia, proving that, while serious results are extremely rare, the issue is still common – especially at sporting events.

There’s a reason that daily water recommendations have both lower and upper limits, so you should try to stick to them in normal, day-to-day life. NHS guidance advises that we drink six to eight glasses of fluid a day, although food can also contribute to this total.

It makes sense, therefore, that drinking 15 cups of water a day might not be sensible. A safe limit is one litre of liquid per hour, as this is roughly what your kidneys are able to process normally.

Finally, it may sound obvious, but the body already has a built-in system to help you know how much to drink – thirst. If you keep drinking and never stop feeling thirsty, talk to your doctor, as this could be a sign that something isn’t quite right. But, for most people, drinking until you’re no longer thirsty, then stopping, will keep your levels in check.

The risks of over-hydration may be low, but it’s worth knowing that the condition is possible, especially if you’re a budding athlete with a marathon to run in 2019. With these tips in mind though, you should be safe from the little-known problem of hyponatremia.