Citing the Delta Variant, Pfizer Will Pursue Booster Shots and a New Vaccine

Scientists were critical of the announcement, pointing to evidence that the current two-dose regimen is powerfully effective against the coronavirus. 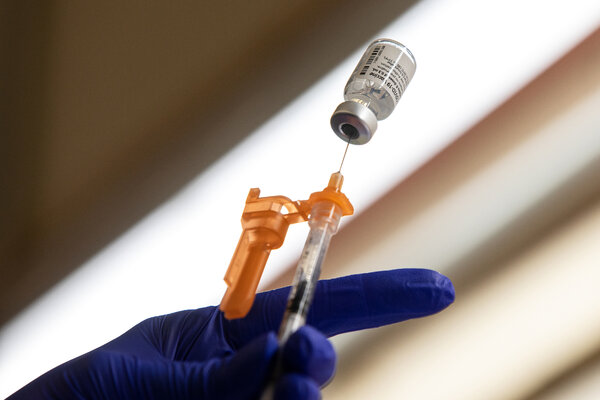 Pfizer and BioNTech announced on Thursday that they were developing a version of the coronavirus vaccine that targets Delta, a highly contagious variant that has spread to nearly 100 countries. The companies expect to begin clinical trials of the vaccine in August.

Pfizer and BioNTech also reported promising results from studies of people who received a third dose of the original vaccine. A booster given six months after the second dose of the vaccine increases the potency of antibodies against the original virus and the Beta variant by five- to tenfold, the companies said.

Vaccine efficacy may decline six months after immunization, the companies said in a news release, and booster doses may be needed to fend off virus variants.

The data have not been published, nor peer-reviewed. The vaccine makers said they expected to submit their findings to the Food and Drug Administration in the coming weeks, a step toward gaining authorization for booster shots.

But the companies’ assertions contradict other research, and several experts pushed back against the claim that boosters will be needed.

“There’s really no indication for a third booster or a third dose of an mRNA vaccine, given the variants that we have circulating at this time,” said Dr. Céline Gounder, an infectious disease specialist at Bellevue Hospital Center in New York. “In fact, many of us question whether you will ever need boosters.”

Federal agencies also sounded a dubious note on Thursday night. Generally, Americans who have been fully vaccinated do not need a booster shot at this time, the F.D.A. and the Centers for Disease Control and Prevention said in a joint statement.