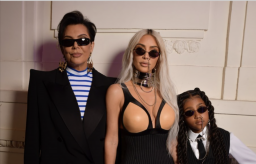 Whether she’s teaching her friends how to do bloody special effects makeup in the woods or flashing the middle finger when she doesn’t want to take family photos, North West is sassy, bold, and undeniably true to herself. She’s also unafraid to speak her mind, much like her parents Kim Kardashian and Kanye West. She recently confronted paparazzi while in Paris for Fashion Week, and it’s so funny.

While walking to her waiting car after eating with her mom on Wednesday, North asked the photographers a very pointed question. “Why do you have to wait for us all the time?” North asked the paparazzi while smiling, according to Hollywood Life. The pre-teen was walking down the steps dressed in black with a sparkling gray jacket. One of the photographers responded, “Because you’re so famous. We love you, North.”

Aw, what a sweet response! Kardashian, who also shares Saint, 6, Chicago, 4, and Psalm, 3, with West, was also dressed in an all-black ensemble. She followed her eldest daughter and said something to North after the quip, although the outlet didn’t catch what it was.

North has been having a blast at Paris Fashion Week with her mom, at one point wearing matching nose rings and pinstripes. Today, Kardashian shared pictures and videos of her walking in the Balenciaga Haute Couture Show, along with a shot of North standing next to Kardashian, Kris Jenner, and Cici Bussey.

North definitely keeps Kardashian on her toes. During an interview on the Honestly podcast, the SKIMS founder revealed North “intimidates” her.

“Who intimidates me? I was going to say politicians, but they don’t. Maybe just my daughter, North,” she said.

As a budding photographer herself, North probably understands better than most celebrity kids how exciting it is to get the perfect shot. But even if she gets irritated with the paparazzi sometimes, we love seeing how unapologetically herself she is!

These celeb parents know how to throw an epic birthday bash!