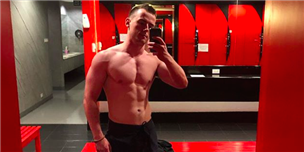 There are all kinds of reasons why a person might want to cut down on booze, like wanting to lose weight, or taking steps to improve their mental health. In a recent video, personal trainer and YouTuber Leon Sylvester shared exactly how stopping drinking alcohol led to him working on his personal fitness, finding a positive new mindset, and strengthening his overall wellbeing.

It’s no secret that alcohol is stacked with calories. “So obviously, when you stop drinking, that’s a lot of calories that you don’t end up consuming, which can help create that calorie deficit to help you lose body fat. So you can expect to lose some good levels of body fat when you stop drinking.”

However, Sylvester adds that some people’s experience is actually the opposite, and that they can find themselves putting on fat when they stop consuming alcohol, as they begin to eat more than they did while they were drinking. “Instead of focusing on your weight, focus on your newfound freedom,” he says. “It’s going to be easy to lose those few extra pounds once you’ve got a bit of sobriety under your belt.”

“Back when I was drinking, I would go to the gym, but when I got there I’d feel super low energy, and it would be 10 times worse if I had a hangover,” he says. “I’d have to force myself to train and just dragged myself through these workouts, and hated every moment of it… As a result, I hated exercise.” He recalls that when he stopped drinking, his energy levels went “through the roof” and he regained his enjoyment of training again.

When Sylvester drank, he would end up binging all kinds of junk food after a night out (which is far from uncommon). “It’s a ton of dead calories that don’t fuel your body,” he says. “When you don’t drink and you’re sober, it becomes a lot easier to manage your nutrition… and good nutrition means less peaks and troughs with your energy levels.”

Sylvester says that he used to find it harder to keep promises to himself, whether that be pledging he wouldn’t drink, or making plans to go to the gym and then flaking out because he had a hangover. Being sober has helped him become more accountable to himself. “When you don’t have hangovers and those sluggish energy levels, keeping promises to yourself kind of becomes the norm. And I really believe that these little promises you make to yourself spread over into other areas of your life.”

You know…I’m human…And I make mistakes ⠀ I may be dieting now and in OK shape, but that doesn’t mean I don’t make errors. ⠀ I also look at myself and think “if I hadn’t had that crepe or that cake, I’d be even leaner right now”. ⠀ But, it’s OK. ⠀ You don’t change the strategy, neither you don’t start panicking. ⠀ You accept being human, dust yourself off and get back on it the next day.

“When I drank alcohol, I just felt really bad about myself,” he says, adding that the other positive effects of stopping drinking, like the weight loss and increased energy, had a huge impact on his self-esteem.

“I was lifting weights while I was drinking, but I didn’t make a great deal of progress,” he says, but notes that he soon began to get more results when he got sober. He explains that his increase in self-confidence meant that going to the gym became less intimidating, and he was more inclined to push himself and take on new challenges. “It was really cool to see the progress and the gains.”

“It’s a lot easier to keep something in motion than it is to get something moving in the first place,” he says. “So while it might be really hard at the beginning to drag yourself to the gym, and it might feel like a chore, it gets easier as time goes on.”