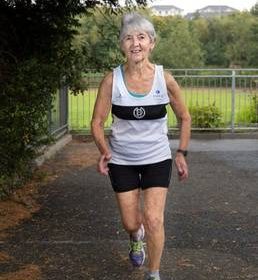 Age was never going to slow down Ann Woodlock – the octogenarian runs 5km four times a week and cycles every day.

The grandmother to six and mum of five (80) began running in her 40s after an injury forced her off the badminton court.

She saw a story in the ‘Evening Herald’ in 1983 about the inaugural Women’s Mini-Marathon and she promptly “galloped around Dublin for the first time”.

Ann, from Drimnagh, Dublin, began competing in cross-country races in 1990 and, a year later, came first in the over-50s category of the World Road Championships.

She has since travelled the world competing in masters events, a class of athletics for older athletes.

“I run on the grass in Phoenix Park, kick the leaves, say hello to the deer, and talk to the old lads walking their dogs. They often say: ‘If you were a horse missus I’d back you’,” she laughed.

Ann is a spokesperson for Positive Ageing Week, which celebrates the contribution of older people.

While some people think her commitment to running is curious – Ann says it gives her a sense of purpose.

“A lot of people think I’m mad. Sometimes the neighbours will say: ‘What are you at? You’re always on your bike or racing around’, but I just keep running.

“What else am I supposed to do? Sit and eat sweets while watching telly? Running gives you a sense of purpose.”

Two years ago, Ann had to curb her exercise routine after shattering her shoulder blade in a bad fall.

She was jogging through Drimnagh when a car broke a pedestrian light. She turned towards the car to call the driver “a gobs***e” and fell.

“I don’t remember falling down, but I knew I couldn’t get up,” she said.

Fortunately two strangers stopped and brought her home and called her son and an ambulance.

“The paramedics had to cut my T-shirt off and I remember saying: ‘Make sure you don’t cut my sports bra – my daughter got it for me in London and it was very expensive’,” she said.

Throughout her recovery, Ann continued to exercise – walking and building up her strength.

Since her fall, she has gone on to win medals at the World Indoor Championships in March 2019 and the European Masters Championships last month.

She is one of the spokespeople for Positive Ageing Week (PAW), which celebrates ageing and the contribution and agency of older people.

Age Action chief executive Paddy Connolly said: “We believe that everyone should have the choice to age in place which means having the ability to live in one’s own home and community safely, independently and comfortably regardless of age, income or ability level.”