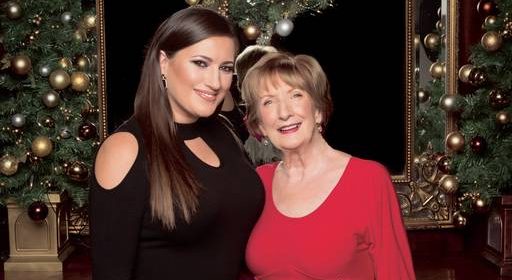 The Virgin Media star lost her father Sean to liposarcoma, a type of cancer, when she was just 23. Now her mum is in the midst of her own fight with the disease.

“I haven’t really told anyone,” Elaine told the RTE Guide.

“My mother has had a whole month of radiotherapy. She is exhausted so I am going down to Cork to see her.

“She was lucky in that it was caught relatively early. In six weeks she will have a scan to see if the treatment worked. But she is such a soldier, taking it all in her stride, not complaining.

“She is a strong woman. We’re all doing our shift work to make sure she is OK. I think she is sick of the sight of us.”

Elaine found a lump herself when she was 19 and has been having regular ultrasounds ever since.

An ambassador for Breast Cancer Ireland, she has been a long-time supporter of the organisation.

“As much as I help out, I haven’t had breast cancer myself so I don’t understand what it is like for anyone going through it. All I can do is my bit to raise funds,” she said.

She lost her good friend Emma Hannigan to cancer in March 2018 after striking up a friendship on her self-titled chat show.

“She was such a wonderful person. I miss her. I miss her humour. I miss chatting to her,” she said.

“Every so often, I pick up the phone to have a bitch about somebody and I forget that she is not there… but she is here somewhere.”

As a present for her 40th birthday, author Emma got her a voucher for a tattoo parlour. They planned to get tattoos at the same time before Emma got seriously ill, but Elaine went ahead and got one of a unicorn in a bid to raise funds for Breast Cancer Ireland.

This year will see Elaine taking part in the Great Pink Run on Saturday, October 19, which she does annually with a “jogging walk”.

This year will have special poignancy for her, given her family circumstances.

“I wore a wig and a tutu last year and I’m sure I’ll have something suitably tasteful again this year,” she said.

“It’s such good craic. Even if you haven’t been touched by cancer, it’s a lovely run to do as there’s such a huge community of people there.”

Her long-running programme is getting a new time slot and will air at 11am on Virgin Media One as part of a massive schedule revamp.