One of the best things about running is that it can be done almost anywhere, including inside, and coronavirus lockdowns are a great reminder of this. Around the world, cooped-up runners have continued to log countless kilometres on a treadmill or by running laps of their living rooms, garages, hotel rooms or balconies.

While most runners prefer running outdoors, sometimes life demands an indoor workout. So, which option is better for you?

Michael Inglis, founder and lead sport psychologist at the Mindroom, says research points to running outdoors because of the overwhelming positive impacts that being in nature, training in the elements and seeing other people has on both a runner’s physiological and psychological performance. 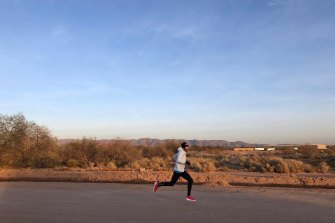 Dion Finocchiaro, who runs outside 99 per cent of the time.

Running helps to release powerful hormones that boost mood and combat depression. A study found that people who ran outdoors reported increased energy, decreased feelings of depression, and were more likely to repeat their workouts.

“Being in nature is very calming, and research shows that running outdoors releases less stress hormone, cortisol. In fact, one study found that being in nature improves your memory and attention span,” Inglis says.

Marathon and ultra-marathon runner, running coach and remedial massage therapist Dion Finocchiaro runs outside 99 per cent of the time. He loves watching the changing landscape, the feeling of air flowing past his skin, and the inclusivity of running outside.

He says running in different conditions such as rain, wind and hot and cold weather can improve endurance. “Especially in winter because in colder temperatures, your heart doesn’t have to work as hard, you sweat less, and expend less energy, all of which means you can run more efficiently.”

There are times when you might want high variability in your running workouts, such as training for an event or a particular goal. Running outside allows you to practise and prepare your body for what it is going to face on race day. “Exposing yourself to the elements can be psychologically useful in helping you cope better with challenging conditions or setbacks during an event,” Inglis says.

In addition, sunlight is the human body’s favourite source of vitamin D, yet more than 30 per cent of Australians are deficient. This can lead to a host of health problems, from fatigue and a weakened immune system to poor bone density and depression. Run outdoors, and you’ll get more vitamin D.

Run outside and, chances are, you’ll also run for longer and further. A study found that people who exercise outside tend to exercise for longer periods of time and more often than those who exercise indoors. And despite what you might think, runners are faster outside. A 2014 study found that while running outdoors is harder on the body, it feels easier than running on a treadmill and results in faster times.

Inglis says the results show that running performance is not determined by how fast the heart is beating. Rather, it’s determined by a runner’s perception of effort. “It’s not how hard your body is working that matters, it’s how hard you feel you’re working. And even though the body works harder when running outdoors than it does when running on a treadmill, running outside feels easier and you’re more likely to feel more motivated to keep going.”

The benefits of running indoors are mostly physical. When it’s too wet, too dark, or too cold, being able to run inside allows runners to still train and maintain fitness. But there’s also the added psychological benefit of feeling safe. “Not having to worry about the elements or your physical safety can have a positive impact on performance,” says Inglis.

The best thing about treadmill running is that you can control the environment and workout including room temperature and the speed and incline of the treadmill.

“From a physiological and psychological perspective, being able to control the environment is very empowering and can be very useful when runners are just starting out, working their way up to a certain pace or building back after injury,” says Inglis. “Given the treadmill takes much of the guesswork out of a workout, it means the session can be a lot easier mentally on a runner.”

Finocchiaro says another plus is that you can convert almost any outdoor running workout to the treadmill. “If you have a premium treadmill, you can access many hilly options and there are some great digital treadmill training tools available such as Zwift and the Apple Fitness+ workout.”

Good treadmills provide a softer landing for runners compared to bitumen or concrete, which helps to reduce the impact on your joints and lowers the chances of injuries such as knee pain and stress fractures.

Finocchiaro says do your research and get a good treadmill. “Try before you buy if you can, and make sure it has the training functions you’re after. Also, make sure you can put it somewhere that you’ll actually use it, so that it’s not a waste of money and taking up too much real estate in the home or garage.”

Get a little more outta life

Start your week with practical tips and expert advice to help you make the most of your personal health, relationships, fitness and nutrition. Sign up to our Live Well newsletter sent every Monday.