'None of us wants to be on the picket line, we just want to look after patients' 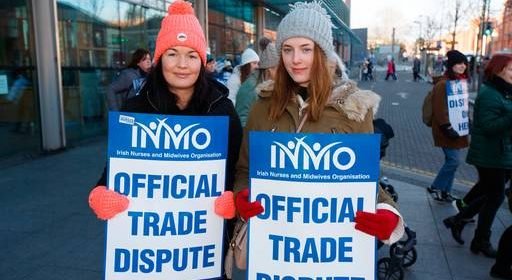 A bitterly cold day did little to discourage some 35,000 nurses from taking to the picket lines outside hospitals across the country.

The support they received from members of the public only added to their resolve.

At each hospital, passing cars could be heard beeping their support in favour of the striking nurses.

Nurses at each of the hospitals had the same message – their industrial action is not simply about a pay increase, but about recognition about the highly skilled work they do, and the pressure they are working under.

Staff shortages, nurses moving abroad and the restoration of their 12.5pc pay cut were issues raised by the strikers.

In Dublin, at Our Lady’s Children’s Hospital, Crumlin, hundreds of nurses were out in force. Anne Marie McGuinness, from Lusk, Co Dublin, said they hadn’t wanted it to come to this.

“This industrial action is not about a pay increase. What it’s about is pay parity and recognition for the highly skilled nurses that we have in this organisation and organisations throughout this country.

“There are hundreds of nurses that have trained here and qualified here, they’re leaving this country to go work in organisations all over the world,” she added.

Her colleague, Helene Murchain, a cardiac nurse specialist from Dundrum, said she was on strike in 1999. “I never thought we’d have to come back to this,” she said.

“When I qualified in 1987, I’m one of the nurses that had to leave the country because there were no jobs for us, there was no adequate pay,” she said.

“Now we’re in a situation where people look at our salary slips but they don’t realise the issues that are happening.

“We’re losing staff all the time, senior nurses are leaving, trying to staff the wards adequately and safely to maintain quality patient care for our patients and their families,” she added.

At Our Lady of Lourdes Hospital in Drogheda, Co Louth, Melissa Garvey said there were 2,600 fewer nurses now than in 2007 and there was a reason so many go abroad.

“The quality of life is much better and the cost of living is much more affordable on a nurse’s salary abroad than it is here,” she said.

“Typically in other allied professions the starting salaries are in and around €7,000 above what a nurse’s salary is for the same four-year Level 8 qualification.” Joining her on the picket line was fourth-year nursing student James Leonard, from Drogheda.

“I would like to stay on [in Ireland] for the first couple of years. I know a lot of my class are already looking at Australia and Canada,” he said.

He said one hospital in London was offering three months pay in advance as well as “relocation fees, they will have your bank account set up, even your flights sorted.

“Simple things that just attract the students more, and [there are] proper staffing levels as well.”

There was support for the nurses from patients who ventured outside for some fresh air.

David Stanley, from Bettystown, Co Meath, has been a patient at the hospital since Monday. “The nurses do a great job, they should get what they are asking for,” he said.

At University Hospital Limerick, by 10am there were 25 people waiting on trolleys in the A&E.

Nurse Derek Cromwell said: “It’s an awful pressure situation we are working in. There are constantly trolleys. The lights are on 24/7. We can’t turn the lights off, which results in patients suffering from what we call A&E delirium. They are confused because they haven’t slept.

“I can triage a patient on Monday and come back in Wednesday and the patient is still in the emergency department on a trolley.”