'It was the inconsistency of care that was most devastating' 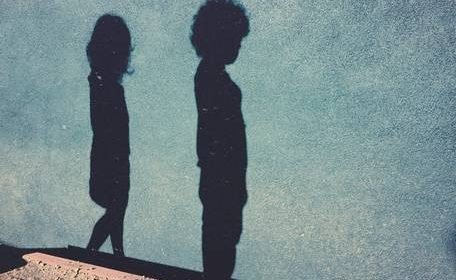 It was a hostile environment. It felt very unsafe, because the rules could change every day and you never quite knew what was going to happen next. Mum was the only parent and I had lots of brothers and sisters – I’m the seventh of eight children – and the eldest was only nine when I was born. So poor Mum was overwhelmed by children, but also overwhelmed by her own addictions to alcohol, cigarettes and coffee – all which contributed mental health problems.

So, as a child, it was frightening. There was no safe place, and there was no safe day. Going home from school there was always a knot in my stomach, because I didn’t know what to expect. I could walk in and she’d be sitting reading a book, the Aga lit, dinner in the oven – so we would get fed – but on many other days that wasn’t the case. The house could be full of people she brought back from the pub after a lunchtime pint, or she could go missing for days – she often went on jaunts. I remember once she came home in a double-decker bus at six in the morning – she’d picked up a busman and he’d given her a lift back.

I was always hyper-vigilant, trying to read what mood she was in. I made her coffee every morning from the age of four, always believing how I made it would dictate whether she drank [alcohol] or not that day. Sometimes she would just throw up, or throw the coffee at me if I’d made it wrong, or pass out and not drink it at all.

Not everyone tried to please her like I did – I was the co-dependent one. When she had my little sister when I was five, I took as many jobs away from Mum as I could. Doing the washing in the bath because we didn’t have a washing machine, trying to keep the house warm for the baby, because Mum wasn’t doing it. Most of my older siblings had left by the time they were 13 or 14, living in squats, one brother to borstal. By the time I was 14, they were all gone. It was just me and my little sister – I went to her parents’ evenings at school. I was trying to cover up for my Mum to hide how bad it was. And it was pretty dire.

I was very unnurtured, and the consequence was that I became a people pleaser. When she died I was 23. Before she died, there had been about seven years where she would have fits. When this happened she’d fall on the floor, crack her head, wet herself, and it was terrifying, so I would call an ambulance, but by the time it came she would be out of the fit, and furious at me for making a fuss.

She couldn’t drink a lot, she was only 4’10” – so she would go to the pub for last orders, because she knew if she had a drink she couldn’t stop unless the pub shut or she ran out of money. That’s when most of the abuse happened, when she came back and she didn’t have anything more to drink and she would be in that horrible state. She would take it out on me, lots of verbal abuse outside my bedroom door and I had school the next morning, and was working a paper round seven mornings a week from the age of 13 so that I could buy food for my younger sister.

Mum would get her money on Monday and it would be gone by Wednesday and then we’d have nothing. I always knew that her need for alcohol came before our needs. Food was given reluctantly and I have no recollection of her hugging me. No kindnesses. Her lack of attention left us open to all kinds of abuse – a lot of us were sexually abused. We were f**ked up, unprotected kids. There were parties in the house, where she would invite just anyone.

She had long periods of deep depression and would intermittently get sectioned – the longest time was when I was four. She was put in a padded cell and given electric shock treatment, and we were all sent away, two-by-two, to different people. I was the seventh, and sent to live with my Dad’s mum in London, whom I’d never met. I was there for a year – when I came back I had OCD. I was traumatised.

Like a lot of children of alcoholics, it was the inconsistency of care which was the most devastating. Kids need attachment, and alcohol breaks that attachment repeatedly. The long-term consequences are not being able to trust, pushing attachments away, inconsistent self-care, inability to manage emotions because it wasn’t safe to express them.

This is probably what people who are drinking around their kids, even normal functional drinkers, are least aware of – that it makes you emotionally unavailable to your children. And children sense, even if they don’t see you drinking, that the connection is broken. This can fill them with fear. The whole of my childhood was fear. There was never a connection I could trust.

Dad would send cheques for the milkman and the butchers and the electric, she’d cash them at the pub. He was trying his best to support us, but her addiction took precedence over everything. She even stole the £5 he sent me from my birthday card. I left home at 16, went back at 17 because I was homeless and pregnant, and I had to sleep with my purse under my pillow because she’d steal my money in the middle of the night otherwise.

She died aged 53 in a gross state in one of her fits. I didn’t phone the ambulance because I was terrified of her lashing out, but she didn’t come out of the fit. For years after, I felt like I’d failed, that I should have been able to save her, but now I know from 14 years in recovery myself that no alcoholic can be saved by anyone else.

She was angry and disappointed in the world. She told me when I was 18 that she was committing suicide slowly because she wasn’t brave enough to do it quickly, and I believed her. She wouldn’t eat, she would get manic episodes and wouldn’t sleep. She’d smoke 60 cigarettes a day, and wouldn’t change her clothes. Her hair was matted, the house was disgusting. There was no care. She didn’t care about life, and she felt life didn’t care about her, and being the child of that I grew up with a big emptiness inside, but also a feeling of responsibility, that I should have been able to make her life worthwhile. I really tried, and I never succeeded. Her death felt like a personal failure.

It was s**t, basically, being brought up by an alcoholic, and it wasn’t until I got into AA that I realised she wasn’t just selfish, that actually she was a really sick person. The word ‘alcoholic’ was never mentioned until her funeral. Not even by the doctors. We had social services and the church trying to help us sometimes – if we had been growing up at a different time, we would have all gone into care. As it was, we kept the family secret – Dad tried to cover up, we tried to cover up.

It’s left lots of scars, but I have built myself a lovely life and overcome a lot of the issues. I think understanding that alcoholism is an illness has made a huge difference to me. When she did stop drinking once, because she had cirrhosis, she’d get up at 6am and buy big bottles of fizzy pop, for the sugar. She needed it. Alcohol is sugar and lots of alcoholics, when they stop drinking, turn to it. We are sugar sensitive and it is genetic.

Because of my upbringing, I got sober earlier than I might have done otherwise, realising that it’s a family illness. I got sober at 37, and my daughter got sober at 24. In the years I’ve been in recovery I’ve been able to help many people. My brother once described me as a beacon of hope.

I’m very grateful. I wouldn’t wish my upbringing on anyone, but without it I wouldn’t be who I am today, with the successful and happy life that I have.

* In conversation with Suzanne Harrington