'I used to eat in secret as I felt that if no one saw me, it didn't happen' 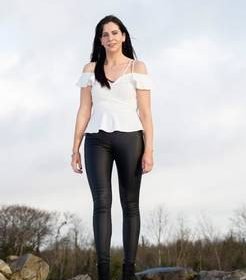 Aisling Burke has always had a problem with overeating and ever since she was a teenager would eat food in secret, spend pocket money on sweets and do her utmost to avoid being weighed or admit she had a weight problem.

But after her second child was born, she was feeling very low and realised that she needed to take control of her life. The first step was to admit she was a binge eater before she could seek help to try and develop normal eating habits.

Thankfully she succeeded – but says it was a long hard road.

“I always overate and while I didn’t admit it at the time, looking back I can see that it was a form of attention seeking as my parents fostered children, so the house was always busy and I probably didn’t feel I was getting enough time from them,” says the Galway woman.

“So when I was a teenager I would sneak extra food between meals and use any money I got to buy sweets and junk food. It was always worse when I was upset and I used to eat in secret as I felt that if no-one saw me, it wasn’t actually happening.

“I was definitely in denial and would always avoid standing on the scales as I didn’t want to know how much I weighed and I blamed tightness of my clothes on them being too long in the dryer or just being cheap things which didn’t fit well.

“This carried on into adulthood and I would find myself eating a whole tube of Pringles after dinner or going out and getting something from Supermacs after I had already eaten – it was a vicious cycle and I just couldn’t stop it, even though it made me feel really bad and I couldn’t understand why I was behaving this way.”

Aisling has three children – Caoimhe age four, Patrick age three, and Daniel age one with her partner Martin. She felt constantly ashamed about her secret binge eating, but couldn’t imagine how she would ever be able to stop.

But the incentive came after she ‘reached an all-time low’ following the birth of her second child. She was advised to take medication to help her deal with very low moods, but decided instead to try and lose weight in order to take control of her life.

“After Patrick was born I really wasn’t myself and felt upset all the time,” she recalls. “I went to the doctor who diagnosed post-natal depression and prescribed anti-depressants – I didn’t really want to take them, but knew I had to do something as my binge eating was taking over my life and I actually thought I had a form of bulimia without ever actually being sick.

“I felt totally powerless to do anything to help myself. But after a couple of days of taking the anti-depressants, I knew that this couldn’t go on – it wasn’t fair on myself or my family, so I made a vow to do something about the bingeing as this really was the root of all my problems.”

So having made this decision, true to her word, Aisling signed up to a slimming class and enlisted the help of some friends who agreed to accompany her to the group.

“I knew that I couldn’t really control my feelings, but I did have a say over what I ate – what I put in my mouth was the only thing I could control,” she admits. “So I signed up to my local Weight Watchers, even though I didn’t expect much as I thought I was beyond help. It was really difficult for the few times I went and to be honest, I didn’t even know if I would be able to go through with it as I couldn’t imagine being in a situation where I was denying myself food. But little-by-little, I started to make small changes and over the weeks began to get into a pattern.

“I would do things like make a big pot of soup which I could have if I really needed to eat and made sure that people knew what I was hoping to achieve, as I thought this would make me more likely to stick to my goals. I also started walking and getting out and about more and this helped to take my mind off eating and gave me something else to focus on.”

Although it wasn’t easy, with the support of family and friends, the mother-of-three has lost a staggering four-and-a-half stone in the past two years and has managed to stop bingeing.

“Today I’m feeling great, but it was a hard battle,” she admits. “There were plenty of times that I lapsed and thought it was just too hard, but I think the thing that saved me was that I always made sure to have the right food in the house, so even if I fell into binge mode, it wasn’t on anything really bad. This was important as everyone has bad days and we shouldn’t feel guilty about them – instead we must pick ourselves up and start again.

“I feel so much healthier and don’t binge eat at all now – I have a sense of purpose in my life again and a confidence I never had before. I’m getting married this year which is also keeping me on track as I want to look great on the big day and being able to try on dresses in shops has been the best feeling in the world. Buying clothes used to be a nightmare, but now I can just pick something off the shelf and try it on – it’s hard to explain how wonderful that feels.

“Breaking a habit is never easy, but with the right support and motivation it can be done and if I ever feel that I might be in danger of bingeing, I remember what my life was before and know that I never want to be in that place again.”