'She accused me of rape and told me I was gay and sterile': an Irishman shares his story of seven years of abuse 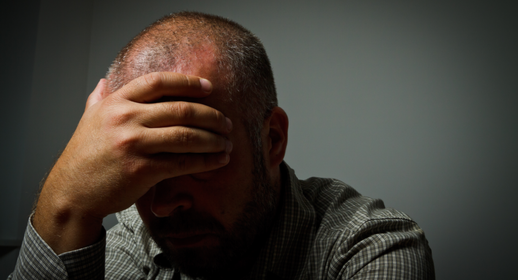 “I was accused of all sorts of things: cheating, giving her STIs. At one point, we were trying for a baby, I was accused of being sterile so I got tested for that. She accused me of being gay,” Brian* explains.

“She said that I hit her, and I know I never did. She threatened to tell the Gardai that I hit her. I had rape accusation threats thrown at me.”

Brian (35), is a business professional, who was emotionally and physically abused by his ex-partner for seven years and he has shared his story with Independent.ie on the condition of anonymity in order to protect himself from potential reproach from his former abuser.

Their relationship is over now, but it took him years to recover from the emotional scars which remained long after the physical ones had healed. When the relationship ended, he turned to alcohol and developed post-traumatic stress disorder. During those seven years, he was isolated from his friends and family and his entire world was laser focused on one person, during which time he also lost some of his personal identity.

“I was her nurse, her cleaner, her shopper. Intimacy was reduced to listening to her problems with work, her own family, day-to-day stuff, or her own health,” he tells Indepndent.ie.

“I was constantly told there is no one else to help her, to confide in, there is no one else for her to speak to, and I mean no one. I eventually – I understand now – after years of this dependency felt wholly responsible for her. If I did not do these things, then, she’d get angry. ‘Why are the cupboards empty?’ ‘Why’s the laundry not done?’; ‘Nobody listens to me’; ‘I have no one to speak to’; ‘The doctor is useless’; ‘Work is stressing me out’; ‘I’m too tired to do this or that’.”

Her moods had such a controlling effect that Brian did everything he could, like the household chores, to keep his partner calm. He realises now, that the fear of what she would say or do left him feeling paralysed.

“So I did them (the chores), it became my thing, to keep a lid on her mood, which I at first just put down to stress of work or something else. There was always a “legitimate” reason. It got to the point, where I feared the next explosion,” he explains.

“Slowly, and eventually, I lost all sense of self. My emotions were no longer my own as I would wait to see what hers were. I had an absoluteness about it, looking back -a total giving over of myself to her erratic moods. My mood was her mood. I was emasculated, and I had become isolated, only seeing her.”

One of the hallmarks of domestic abuse is the isolation of victims and in some cases, visits and phone calls to loved ones are so obsessively monitored that many victims eventually reduce contact with their loved ones and friends.

“She had me convinced that she had a barring order taken out against a friend of mine, a female friend. At this stage I was, for all intents and purposes, not all there in the head. I was no longer in any control, and I was losing myself to her by this time.”

“I didn’t see this friend for three years. She wasn’t to come within so many yards of us.

He added: “When I look back, I go ‘why did I go along with it?’…. It comes back to fear, not wanting to have her explode.”

“Why didn’t I leave,” he asks. “I don’t know. But after she left, I checked myself into rehab – 30 days of rehab and two years of aftercare. I was told I was showing signs of someone with Stockholm syndrome. I felt sorry for her.

Domestic abuse victims typically pick up the phone to call AMEN’s helpline up to 30 times before they actually get the courage to speak, a spokesperson tells Independent.ie. AMEN is the support service for male victims of domestic abuse in Ireland.

Some 72pc of AMEN’s clients have suffered psychological or emotional abuse. The other callers report physical violence and financial abuse.

“The mental abuse is what tears them down,” a spokesperson for the organisation tells us. “This constant criticising and undermining, being told they’re a useless father, day in day out, the abuse is categorical.”

One AMEN client said his wife hid his car keys every night to ensure he was late for work the next day, and she called him up to 30 times a day while he was there and would then threaten to turn up at work if he didn’t answer.

Another caller said his wife gave him only €5 to spend every week and monitored the amount of petrol he could use on his journey to and from work. He rang the helpline in a panic one day because when his regular route was diverted due to road works and he knew there would be consequences at home.

Brian’s ex-partner often accused him of losing things that he knew he’d never touched and the constant belittling became so stressful that by the penultimate year, he had developed an alcohol dependency.

“She would argue with me until I was exhausted and I’d lock myself in the bathroom and plead with her to leave me.

“I just felt helpless to get her out of my life. When I’d eventually open the door of the bathroom, mentally and emotionally wiped, I’d be infantilised. She’d say stuff like ‘You poor little foolish man, come on, I’ll tuck you into bed’.”

“We’d get up the next day and it’s as if the night before never happened, and she’d be in great form, and I’d be thinking ‘Okay. she’s ignoring what happened and I’m not going to raise it because I was too scared.'”

Eventually, in the final two years of their relationship, the abuse turned violent. Brian recalls two blackened eyes, two bloody noses, and a “right hook” to his chin that lifted him off his feet and against the hall door. But he says “The mental, emotional manipulation was far worse.”

“I do remember on one of the punch or slap evenings, she said ‘why do you make me do it?’ My self esteem was gone, I invested it all in trying to find…to resurrect the person I first met, but my efforts were fruitless.”

Two years after Brian persuaded her to leave, he suffered a PTSD episode. He was watching a domestic violence campaigner speak online and he felt her story resonated with his own. He realised for the first time that he’d been abused both  emotionally and physically, and started crying. The tears didn’t stop for 24 hours.

At this point, he contacted a psychotherapist for help, who later explained that it had stopped because he’d acted to take some of his power back.

In a pocket notebook from rehab, Brian has written: “Fear is the only constant. Fear holds it all together. Alcohol numbs it.

“That pretty much sums it up for me… living in fear,” Brian, now sober, tells Independent.ie.

“I’d be afraid [even now] she could take me to court if I identified her. I can’t prove anything. I can show bills for AA and bills for counselling, and all sorts of stuff. But when you want out of it, you don’t think, ‘should I record this’? And ‘should I record that?’”

But he adds: “I learned a lot about myself. And there’s one thing about hitting rock-rock bottom – you get a second chance to rebuild. You know what to do. If you do a good rehab you should have the foundations to be even better than you were before.”

On his ex-partner, he says: “I do not believe that she is in any way aware of what she was doing, or she is in complete denial. The narcissistic personality, they don’t ever believe they’re wrong.”

Small everyday things like her name being called, or a smell, or a song, will trigger memories for Brian but he has found a way to move on.

“I believe I have had a good recovery, I have come out the other side, and there are good things happening in my life.