Synthetic dyes can act as alternative ligands for proteins and can be used as part of a protein purification protocol for chromatography. 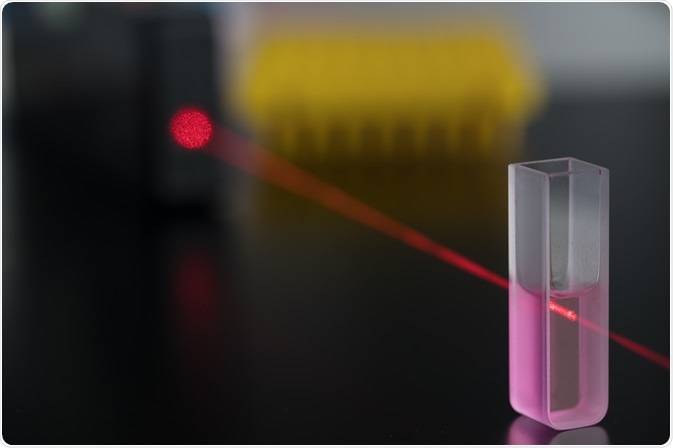 However, the ligands used in these columns, such as antibodies, lectins and nucleotide co-factors, are unstable, expensive and have a low capacity. Also, they may not be readily soluble, which could cause problems for use in chromatography.

Synthetic dyes can also act as ligands for proteins. The dyes used are based on a chromophore, typically either azo, anthraquinone or phthalocyanine, and also have a reactive part, typically a chlorotriazine ring. The chromophore gives the color to the dye and should have sulfonic groups to allow it to be soluble in water. The reactive part allows the dye to bind to the matrix.

Advantages and disadvantages of synthetic dyes

Synthetic dyes are inexpensive, can easily be immobilized onto the matrix of the chromatography, are resistant to chemical or enzymatic degradation, , and have a capacity far higher than other ligands. Thus, this technique is good for large scale protein purification.

However, even with those advantages, dyes are not as specific as other types of ligands, potentially limiting their usage. Alternatively, this low specificity could be an advantage as it could reduce the need for having to use multiple ligands.

Increased understanding of how these dyes interact with proteins have led to an improvement in the design of the dyes. Synthetic dyes (also known as “biomimetic dye-ligands”) are relatively new and are designed to mimic biological ligands, either structurally or by mimicking ligand-protein interaction. It is believed that these biomimetic dye-ligands have increased sensitivity over the older dyes.

How do these dyes bind to proteins?

Several studies have shown that dyes such as Cibacron Blue 3-GA bind readily to nucleotide binding regions of certain enzymes. Although, there is always the possibility that the dye will bind to other regions of the proteins.

This is used less than ionic forces, and they seem to be increased by ionic strength while decreased by lower temperatures.

This is seen infrequently, but the principle of exclusion-diffusion is the way in which unbound proteins of a higher molecular weight are removed from the chromatography column first, with the protein of lowest molecular weight being eluted last. This only seems to occur at around pH 9.

The chromatography process depends on a variety of factors, including dye concentration, buffer conditions, flow rate, and column geometry. The following steps are involved:

Purification of the dye

First, the dyes need to be purified as they are usually stored in buffers with added stabilizers, and could also have other contaminants. Labrou suggested the use of a gel filtration column chromatography for this purpose.

Immobilizing the dye onto the chromatography matrix

The matrix with the dye is de-gassed, and then packed into a chromatography column. The de-gassing is to prevent air bubbles from forming. The column is washed with buffer, prior to the loading of the protein samples.

Once the protein sample has passed through the column, the column is washed with the buffer again to remove any proteins that did not bind to the dye, and this fraction is collected as well.

A second buffer is then used to elute the bound proteins from the column and the resulting second fraction is also collected. Both fractions are then tested for the absence/presence of the protein(s) of interest.

Dr. Maho Yokoyama is a researcher and science writer. She was awarded her Ph.D. from the University of Bath, UK, following a thesis in the field of Microbiology, where she applied functional genomics toStaphylococcus aureus . During her doctoral studies, Maho collaborated with other academics on several papers and even published some of her own work in peer-reviewed scientific journals. She also presented her work at academic conferences around the world.