Technique and Precautions During Hysterosalpingography

Hysterosalpingography is an imaging technique which is performed to evaluate the contour of the uterus and the fallopian tubes, as well as confirm tubal patency. It is usually included as a part of the evaluation of female infertility. 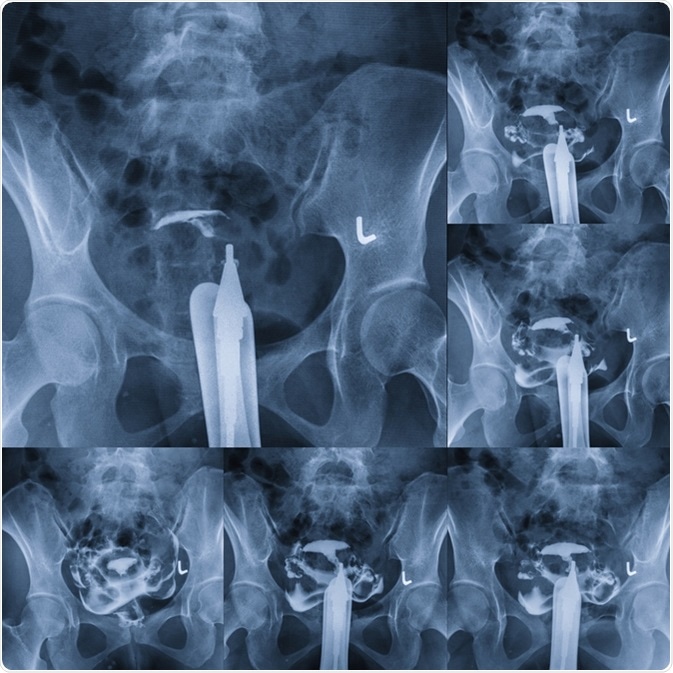 A hysterosalpingogram (HSG) should be done only during the follicular phase (also called the early proliferative phase) of the menstrual cycle, specifically during the first 2-3 days after the end of woman’s period. This helps to ensure that the woman is not pregnant. If the patient is pregnant the fetus may be exposed to radiation from fluoroscopy.

Again, at this time the endometrium is at its minimum thickness, which helps visualize the uterine cavity better. A pregnancy test using beta-HCG is performed as a precaution, again to rule out pregnancy.

The European Society of Human Reproduction and Embryology (ESHRE) advises that both semen analysis and ovulation testing should be pursued before an HSG is recommended.

The lithotomy position is usually preferred. The patient is sedated to avoid vasovagal reactions during the initial part of the procedure. Antimicrobial drugs may be routinely used if the physician believes tubal occlusion is present, or if there is need for infection prophylaxis (for example, patients that have artificial heart valves).

The cervix is visualized using a vaginal prewarmed speculum, and a slender tube or catheter is introduced carefully. It may be of metal or rubber, or even plastic. It is filled with contrast prior to its introduction so that no air enters the uterine cavity. This is important since air bubbles create artefacts which could mimic a protruding endometrial lesion (such as a polyp).

Fluoroscopy is used to guide the introduction of the cannula and the injection of the dye. The catheter must be as small as will suffice to create a secure passage into the uterine cavity without dye leakage back into the vagina. Metal, plastic or latex catheters may be used for this purpose.

The Use of Contrast Agents

In most cases a water-soluble contrast agent is used. The amount and speed of injection should be carefully monitored. Too much injected too fast may cause it to enter the blood vessels, causing kidney problems, while too little contrast will not outline the uterine and tubal contour adequately.

Oil-based iodine-containing contrast media such as ethiodized oil were initially recommended as they were thought to produce an improved pregnancy rate. The reason was thought to be the breakdown of fragile adhesions or washing out of tubal debris by the heavy dye.

However, several later studies failed to show any significant difference in fertility rates with the use of this type of dye, while it may be associated with tubal granulomas in the presence of tubal inflammation or infection. Very recent research shows, however, that about 40% of women without pelvic infection conceived within 6 months of having this procedure with ethiodized oil, an oil-based iodine-containing agent, as against almost 30% with a water-based contrast medium.

An initial fluoroscopic image is taken to visualize the pelvis, after which the contrast is injected. Subsequently four images are taken at timed intervals to demonstrate the dye outlining the interior of the uterus, the filling of the fallopian tubes, and the potential spilling of the dye into the peritoneal cavity through the open or fimbrial end of each tube. This spill-over confirms tubal patency.

In some cases, no spillage is seen on one or both sides because of tubal spasm rather than blockage. To rule this out, in such cases an antispasmodic agent such as scopolamine is administered intravenously, followed by the injection of more contrast. More images are taken once the patient’s heart rate increases (which is another effect of this drug), showing that it is taking effect. The accumulated images record the early filling of the uterus, complete filling of the uterus, tubal filling, and spillage of the dye.
The radiation involved in this procedure is equivalent to that caused by about 150-300 chest X-rays at about 0.01 millisievert (mSv) each. The images are carefully observed by both the radiologist and the gynecologist to make a final diagnosis.