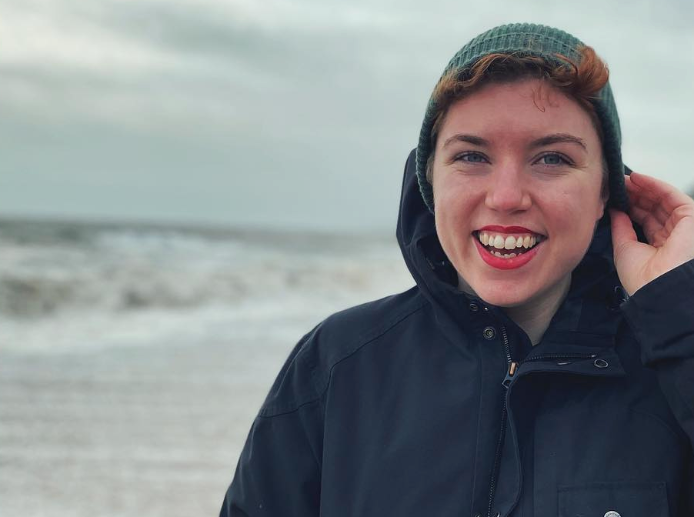 ‘Well, yes and no. We need to send you for a scan of your brain as soon as possible.’

My brain? For a problem with my nipple? The doctor looked unusually sullen for someone who’d just given the all clear that the breast discharge I’d been in denial about for two years wasn’t due to a lump or something more sinister inside my boob.

She looked at me before taking a deep breath in and breaking the news that would turn my world on its head.

‘There’s a good chance, given your blood levels, that you might have a type of brain tumour.’

In that moment my whole world stopped,  it felt as though my heart had fallen into the pit of my stomach and it took everything for me not to vomit across the doctor’s floor.

With lockdown in full swing in March 2020, I hadn’t paid much thought to the pin-head amounts of clear liquid that would occasionally mark my bra. I had left my flat in Edinburgh to stay with my parents in the Scottish countryside while we all waited for this new ‘coronavirus’ thing to blow over.

Three months later and with phone call appointments with GPs the norm I shrugged off the discharge with an irresponsible confidence that ‘well, if it’s not a lump I don’t need to worry – and they can’t exactly check my boobs over the phone.’

Slowly, lockdown eased, as did my concerns about the symptoms I was experiencing – my main worry was about catching Covid while I rushed to see the loved ones I’d been separated from for months on end.

And then, nine months later in November 2020, everything changed.

I’d been to a private health screening through my work and it wasn’t until the last few minutes of my hour’s session with the GP that I brought up the discharge.

The discharge itself was suitably unexciting; it was completely clear, appearing in tiny amounts and only if there was pressure against my chest, like when pulling off a sports bra.

In my mind, we’d already covered the more ‘serious’ stuff – I have a chronic fatigue illness and my health relating to it was my main concern – so I mentioned my leaky nipple very nonchalantly.

‘How long has this been going on?’ she quizzed. The look on her face when I told her it had been on and off for two years indicated that this had not been the answer she was looking for.

My breasts were checked for any lumps and I had my blood tested. I figured that my blood was being checked to see whether I was pregnant or not – given lockdown this was a complete impossibility.

I was genuinely delighted when my doctor reported that I was in the clear for lumps – my malfunctioning breast was actually nothing to worry about, right?

Wrong. In fact, that didn’t even begin to touch my situation.

The blood test was actually to check my prolactin level and I was seriously overachieving. A normal prolactin level for a non-pregnant woman is around the 25 mark… mine was in the hundreds and indicated that I might have something called a prolactinoma.

My new companion that I had unwittingly been carrying about in my skull for two years at this point was a type of brain tumour that grows in the pituitary gland at the base of the brain.

As the name suggests, a prolactinoma interferes with your level of prolactin – the hormone that is responsible for causing your breasts to grow and produce milk during pregnancy and after birth.

‘It’s very unlikely that it’s cancerous’, my doctor explained as I sat staring into the abyss, ‘but we need to get you for a scan as it could be having a serious effect on your fertility. Do you want children Dayna?’, she asked.

I was 27 and being faced with a question I never expected to have to think of an answer for so early on.

Did I want kids? ‘I could adopt or use a surrogate’, I thought to myself. ‘A biological connection does not a parent make after all’. But what if I wanted a biological child or maybe a future partner did?  What if it made me a total no-go zone as a partner?

I sat in silence, overwhelmed by what felt like an impossible question, and seeing I was frozen by the future-impacting situation, she began typing on her computer.

The questions continued to spin around my head as I stood crying to my mum down the phone outside the health centre.

My hospital referral was fast tracked and just a week later a lovely woman called Sharon was injecting hormones into my arse – yes, it hurt a lot – to see how well my pituitary gland was working and if it was able to regulate them.

On my big day out at the hospital, I also had an MRI to see what size of prolactinoma I was dealing with and also had to have my vision tested – prolactinomas can press on your optic nerve and cause problems with your peripheral vision if they grow too large. I went home and waited for my results and everything around me suddenly went very baby-centric.

Everyone I walked past seemed to have a baby. Friends announced that they were pregnant. Every TV show I watched had a storyline surrounding pregnancy and babies.

I felt cheated of a choice I never knew that I might not have – I’d spent all my teens and twenties desperately trying not to get pregnant and here I was facing infertility at 27.

And then there was the other kicker – if it was a sizeable prolactinoma there was the chance that surgery to remove it was on the table. My mind switched between ‘wow I could be infertile’ to ‘wow I might have to have brain surgery’ every two minutes and I was averaging two hours of sleep a night as I tried to process the worst case scenarios.

I told just a couple of my closest friends, who supported and pulled me through my darkest days while I waited for an update – a slow, dragging fortnight that felt like a lifetime.

And, fortunately, despite almost two years of ignorantly ignoring a change in my breast, I was given good news.

Yes, there was a prolactinoma, but it was much smaller than expected and it could be treated with medication – a tablet I’ll take for the rest of my life until menopause.

My fertility and chances of conception in the future also had a positive update – when, or if I decide to have babies, my doctors will watch my prolactin level.

I hope my story acts as a reminder to anyone who has breasts that if something doesn’t seem right, or you notice a change: go to your doctor.

I know I will be.

Breast changes to look out for according to the NHS: