What We Know About Diet and Weight Loss 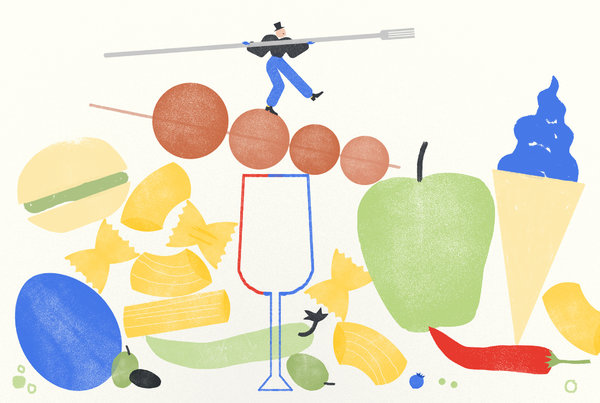 You’d think that scientists at an international conference on obesity would know by now which diet is best, and why. As it turns out, even the experts still have widely divergent opinions.

At a recent meeting of the Obesity Society, organizers held a symposium during which two leading scientists presented the somewhat contradictory findings of two high-profile diet studies. A moderator tried to sort things out.

In one study, by Christopher Gardner, a professor of medicine at Stanford, patients were given low-fat or low-carb diets with the same amount of calories. After a year, weight loss was the same in each group, Dr. Gardner reported.

So does a low-carbohydrate diet help people burn more calories? Or is the composition of the diet irrelevant if the calories are the same? Does it matter if the question is how to lose weight or how to keep it off? There was no consensus at the end of the session. But here are a few certainties about dieting amid the sea of unknowns.

People vary — a lot — in how they respond to dieting.

Some people thrive on low-fat diets, others do best on low-carb diets. Still others succeed with gluten-free diets or Paleo diets or periodic fasts or ketogenic diets or other options on the seemingly endless menu of weight-loss plans.

Most studies comparing diets have produced results like Dr. Gardner’s: no difference in weight loss between study groups as long as the calorie intake was kept equal. But within each group, there always have been a few individuals who lost a lot of weight, a few who did not lose any weight, and a few who actually gained.

Dr. George Bray, an obesity researcher who is emeritus professor at the Pennington Biomedical Research Center in Baton Rouge, La., sums it up this way: “Eat the diet you like and stay with it.”

There is nothing new in the diet universe.

Many of the diets people swear by today have been around in various incarnations for decades. More than a century ago, a best-selling book, “How to Live,” told Americans that the only way to lose weight was to count calories.

Low-carbohydrate diets were introduced by a London undertaker, William Banting, in 1863 and became so popular that one word for dieting was “banting.”

Most are short-term, and often it is hard to know if subjects really adhere to the plans they were given. Few studies follow participants for a year or more to see if they kept the weight off. Little of this research is ever definitive, and most of it leaves plenty of room for skepticism, argument and debate.

Dieting for better health is not necessarily the same as dieting to lose weight.

Any diet that restricts calories will result in weight loss, but some diets simply are not healthy even if you are shedding pounds.

It is hard to find definitive evidence that particular diets protect against disease, but many public health experts agree that unprocessed or minimally processed foods, along with abundant fruits and vegetables, can promote health.

They also agree that people with diabetes or high blood sugar levels often benefit from a diet low in carbohydrates.

What we don’t know

Why do people have such varying responses to diets?

Is it genes? Dr. Gardner looked at participants in his study to see if he could find genes that predicted their responses to their assigned diets. He could not. Other scientists also have failed to find particular genetic predictors.

That does not mean there are no genes involved in diet and weight loss. But it is hard to disentangle those effects from other possibilities. Motivation, for instance: One person may be mentally ready to diet, while another might make only a halfhearted effort, surrendering to temptation after a short time on the assigned diet.

Some researchers believe that the body’s production of insulin in response to dietary carbohydrates may explain why some dieters lose weight and others do not. Dr. Ludwig found such a link in his study. But Dr. Gardner found no such effect, and the moderator of the symposium, Kevin Hall of the National Institutes of Health, argued that the disputed link does not hold up to close scrutiny.

Is there a diet that prevents you from regaining lost weight?

No one wants to regain the weight so painfully lost. The problem is that the body fights to get back the fat, lowering the metabolic rate and driving a voracious appetite.

Dr. Ludwig was trying to ameliorate this effect with a low-carbohydrate diet. Whether it worked is still subject to scientific debate, and for now the question is still open.

Dr. Ludwig, an advocate of low-carbohydrate diets, and Dr. David Allison of Indiana University, an all-around diet skeptic, are conducting a more extensive study. Participants will be housed in a residential treatment center for 13 weeks while their calorie intake is controlled and their metabolic responses to various diets are measured.

We just don’t know to what extent added sugar contributes to the obesity epidemic. Many scientists think it is a factor, but not necessarily more potent than some others, such as refined grains.

As Dr. Ludwig and his colleagues noted in a recent review, people in Western countries get more calories from starchy foods than from sugar. In Australia, people have been cutting back on added sugars since the 1990s even as the population has grown steadily fatter.

No one is advocating a diet of sugary foods, but many leading researchers are hesitant to blame a single ingredient for widespread obesity.

Why have people become fatter in recent decades?

The big unanswered question. The problem here is that so many things changed in our society while the obesity epidemic gathered steam.

Some changes ought to have lowered weights: the availability of cheaper, fresher fruits and vegetables; the popularity of walking and gyms; increased nutrition education in schools, and improvements to school lunches.

Other societal trends could have encouraged weight gain: ever-larger portion sizes; a growing tendency to snack all day; more people eating more meals out. and a cultural acceptance of overweight to the point where it now seems almost normal.

And then there is there is the decline in smoking. It has been an enormous health benefit, of course. But smokers weigh less than nonsmokers on average; when people stop smoking, their weight usually goes up.

How are these forces working together to drive up weight over all? That, no one knows.