Britain’s biggest GP body is advertising lucrative jobs abroad which pay up to three times more than the NHS, MailOnline can reveal.

The Royal College of General Practitioners (RCGP) — which represents 50,000-plus members — posts hundreds of roles on its vacancies site.

One job in British Columbia, Canada, famed for its picturesque scenery, comes with a whopping £316,000 salary.

Another pledges a £23,000 relocation package on top of a similar pay package, and brags about being close to an award-winning golf course.

But it was slammed as ‘hypocrisy’ by patient rights campaigners, given the shortage of family doctors in the UK that the RCGP itself often criticises the Government for failing to address.

Yesterday, the RCGP blasted Health Secretary Therese Coffey for failing to address the crippling shortage in her plan to rescue the ailing health service.

The shortage has left Britain more dissatisfied than ever with their doctors, with millions struggling to secure appointments. 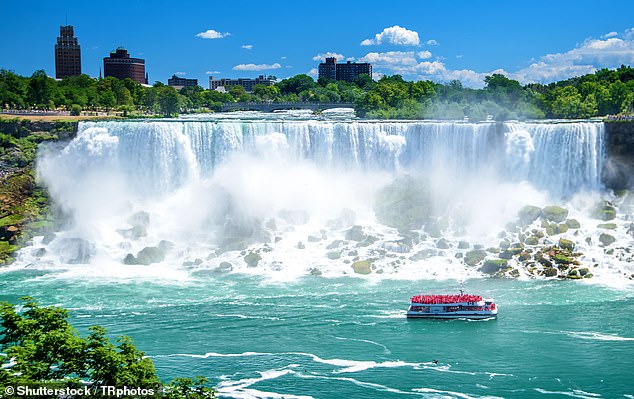 The Royal College of GPs has been criticised for hosting ads trying to entice British GPs to go work in Canada, home to part of the Niagara falls, for triple what they would earn in the UK 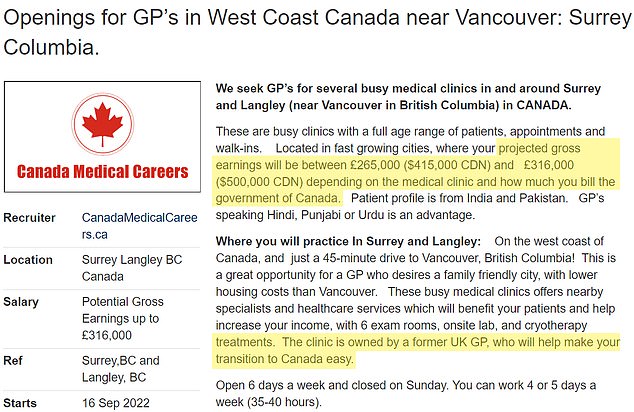 One ad on the RCGP website says British family doctors could earn up to £316,000 and the clinic in the province of British Columbia was owned by a UK GP to help them settle in 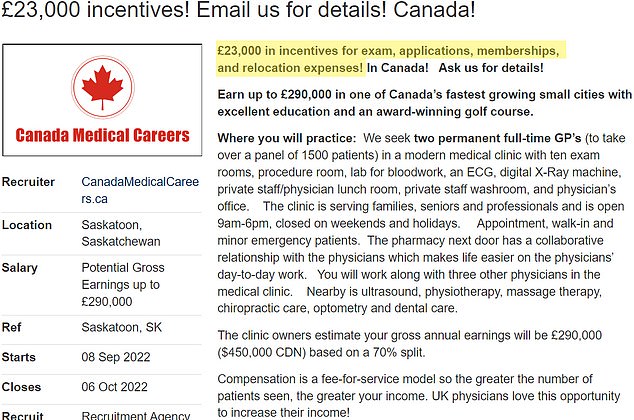 Another ad, for GP position in Saskatoon, offered a £23,000 golden hello to cover relocation and other set-up costs, adding that UK physicians would ‘love’ the opportunity to boost their income by working in Canada

MailOnline found five jobs across the Atlantic on the RCGP website.

One ad, placed by recruitment agency Canadian Medical Careers, also touted how the successful applicants will avoid some of negative aspects of being family doctor in other places.

‘No home visits, no late nights and no hospital visits,’ it read. The ad said it was seeking GPs for several clinics in the cities of Surrey and Langley in British Columbia.

‘This is a great opportunity for a GP who desires a family friendly city, with lower housing costs than Vancouver.

The number of permanent GPs working across England has dropped year-on-year for the third month in a row, new figures show.

The figures come as new Health and Social Care Secretary Therese Coffey announced plans for GPs in England to offer all patients a non-urgent appointment within two weeks and urgent slots the same day, with patients also able to compare the performance of local surgeries.

But leading GPs have slammed the move, with the Royal College of GPs saying that publishing ‘league tables’ of surgeries will not ‘improve access or standards of care’.

Commenting on the plan, RCGP chair Professor Martin Marshall said: ‘GPs share patients’ frustrations when we cannot deliver the care we want to deliver in a timely way.

‘But we are caring for an increasing number of patients, with increasingly complex health needs, and carrying out more consultations every month than before the pandemic – yet with fewer qualified, full-time equivalent GPs than in 2015.’

The drop in qualified permanent GPs in England in June, July and August follows a year-on-year fall of 0.4 per cent at the end of March.

The figures suggest the start of a possible trend, though more data is needed to confirm if the numbers are on a clear downwards path.

GP workforce statistics can fluctuate month to month, which is why year-on-year comparisons are a more reliable measure of long-term change.

The latest figures also show the proportion of GPs in England working full-time at local surgeries continues to be at its lowest level since current records began nearly seven years ago.

There is no equivalent monthly data for August 2021, but quarterly figures show the proportion of GPs working full-time stood at a third (33 per cent) in September 2015.

All statistics are based on the number of full-time equivalent posts in the GP workforce, and do not include trainees or locums.

Separate figures published on Thursday by NHS Digital show the number of GP practices across England has fallen by 15 per cent in the last seven years, down from 7,623 in September 2015 to 6,459 in August this year.

This could include smaller practices merging to form bigger surgeries, so might not mean that patients are losing access to services.

But the number of full-time equivalent qualified permanent GPs per 100,000 patients has dropped over the same period from 50 to 43, suggesting GPs have more patients to look after.

Meanwhile, the number of qualified permanent GPs from outside the UK and European Economic Area (EEA) based on headcount stood at 5,700 in August 2022, up by 8 per cent from 5,293 in August 2021.

‘The clinic is owned by a former UK GP, who will help make your transition to Canada easy.’

Another advert for a GP in Saskatoon, a city in the central province of Saskatchewan, offered a generous £23,000 welcome bonus to cover relocation and registration costs, in addition to a £290,000 salary.

The ad also boasted how UK doctors will ‘love the opportunity to boost their income’.

It added: ‘The greatest benefit of practicing in this clinic is that patients will appreciate and respect you, leaving you with a feeling that what you do really matters.

‘Homes on the golf course are available!’

Dennis Reed, of Silver Voices, a campaign group for senior residents who have repeatedly voiced concerns over lack of GP access in the UK, said the RCGP was being ‘completely hypocritical’ and ‘short-sighted’ by hosting the ads.

‘We all know there’s not enough GPs, we already know the Government is struggling to recruit any more and its already said its promise of 6,000 more GPs by 2024 won’t be achieved,’ he said.

‘So, for the Royal College on the one hand to be saying we need more GPs and then getting a few pennies from adverts encouraging our NHS trained doctors to go to Canada strikes me as very hypocritical.’

The RCGP charges up to £1,795 for recruiters to list vacancies on the jobs section of its website.

But it has so far declined to reveal how much cash it makes from ads from overseas operators.

Mr Reed added that many Britons, particularly older people, would be disappointed with the RCGP’s actions, given many British doctors’ training is partly funded by the taxpayer via the NHS bursary.

‘Older people would be expecting that those skills are used in this country.

‘Of course, we can’t stop people from leaving but to encourage them to leave is madness.’

The criticism comes after the RCGP launched its own attack on the newly-appointed health secretary Therese Coffey for failing to address GP shortages.

Dr Coffey, who is on policy blitz as part of preparing the NHS for winter, promised to end Glastonbury ticket-esque 8am scramble for GP appointments.

As part of this, she said there would be an ‘expectation’ that patients will be offered an appointment within a fortnight of contacting their local practise.

She also promised to release NHS ‘league tables’, naming and shaming clinics with long waiting lists and allowing patients to switch to another.

But her announcement, part of a wider ‘ABCD’ strategy to avert an NHS meltdown this winter, contained no details on how services would be better staffed.

She merely said the Government was committed to producing a workforce plan but provided no date on when this would be offered.

Dr Coffey’s blueprint was criticised by RCGP chair Professor Martin Marshall for its lack of a ‘new recruitment and retention strategy’ for GPs.

‘Lumbering a struggling service with more expectations, without a plan as to how to deliver them, will only serve to add to the intense workload and workforce pressures GPs and our teams are facing, whilst having minimal impact on the care our patients receive,’ he said.

‘GPs share patients’ frustrations when we cannot deliver the care we want to deliver in a timely way.

‘But we are caring for an increasing number of patients, with increasingly complex health needs, and carrying out more consultations every month than before the pandemic — yet with fewer qualified, full-time equivalent GPs than in 2015.’

Speaking today, an RCGP spokesperson said it was committed to boosting the number of GPs in the UK. 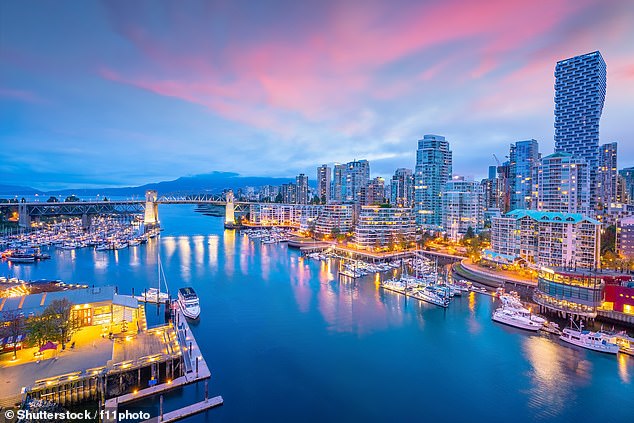 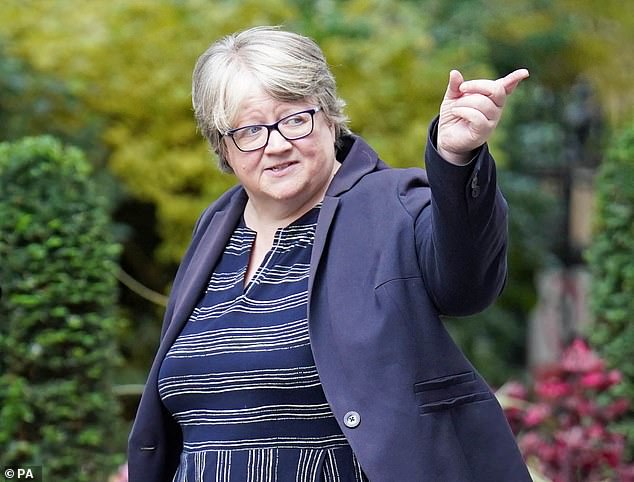 Therese Coffey, pictured yesterday, was criticised by the Royal College of GPs over her plans to boost patient access without addressing staffing

‘Addressing the intense workload and workforce pressures GPs and our teams are working under is of paramount importance to the RCGP,’ they said.

The RCGP declined to reveal how much it made off international recruitment ads, stating it was not in a position to share ‘commercially sensitive information’

It’s not the first time the college has been criticised for hosting these types of advertisements whilst moaning about a staffing exodus.

In April this year, the college was forced to defend posting jobs ads for British GPs to go work in Australia. 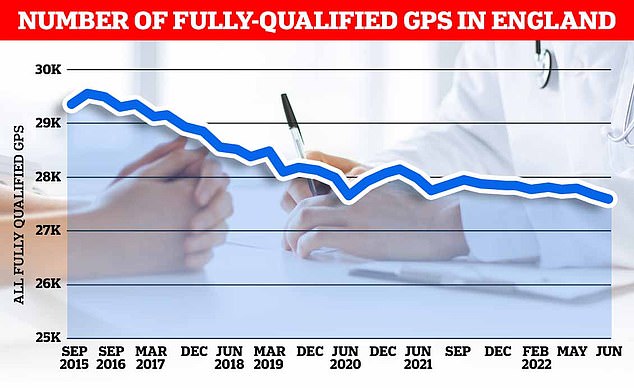 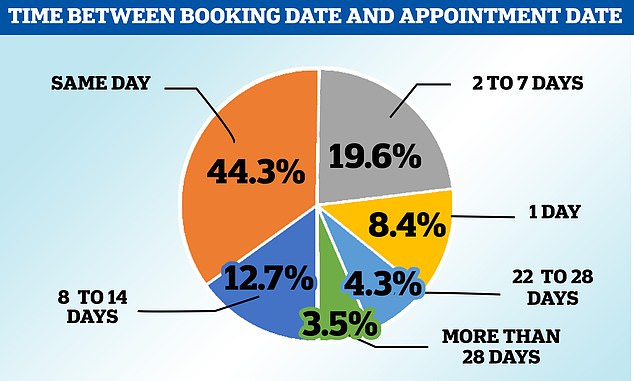 These ads boasted about offering a better  ‘better work-life balance’, ‘ZERO admin’ and ‘sunshine all year round’, in addition to a generous salary.

The RCGP had previously banned overseas job ads but reversed this in 2020 after feedback from its membership.

It comes as official data shows number of permanent GPs working across England has dropped year-on-year for the third month in a row.

The workforce crisis has been exacerbated by many GPs are retiring in their 50s, moving abroad or leaving to work in the private sector because of complaints about soaring demand, paperwork and media coverage. 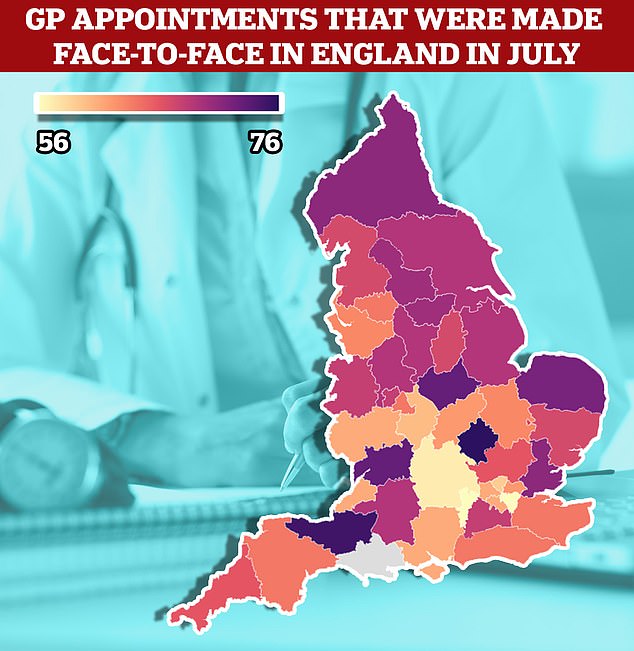 Map shows: The proportion of GP appointments made in-person in July across England’s integrated care boards 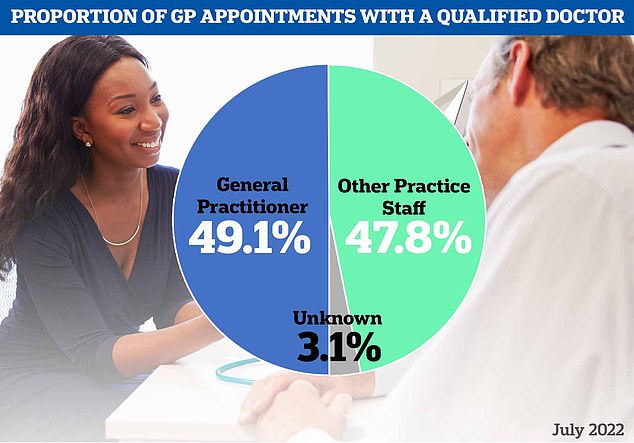 Meanwhile, the figures also showed fewer than half of appointments across the country were with a fully-qualified GP

Some family doctors, who earn an average of £110,000 per year, now work ‘part-time’, which is also helping fuelling the appointment crisis.

At the same time, the population has also soared, exacerbating the patient-list size ratio.

A survey earlier this year revealed patient satisfaction with their GP surgery has plummeted to its lowest ever level, fuelled by the appointments crisis.

It has seen patients rushed through consultations like ‘goods on a factory conveyor belt’, a damning report warned in May.

And NHS data shows a quarter of consultations take less than five minutes in some parts of the country.

Doctors warn that squeezing in so many appointments raises the risk of missing diseases and prescribing the wrong drugs.