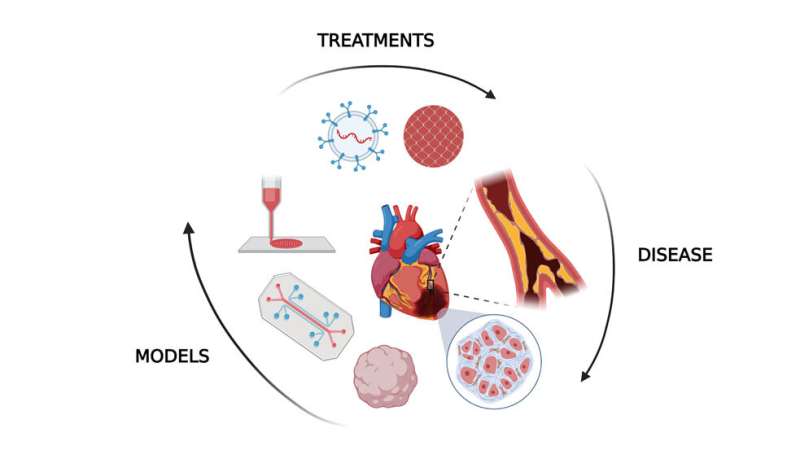 A heart attack, or myocardial infarction, is one of the leading causes of mortality worldwide, resulting in 18 million deaths per year. These numbers are expected to increase in coming years because of cardiovascular complications from COVID-19.

In Biophysics Reviews, researchers from the University of Notre Dame explored how human tissue models, outside the body, can be used to improve treatment and diagnosis of heart attacks.

Myocardial infarction occurs when plaque in a major coronary artery slows down and blocks blood flow to the heart, depriving it of oxygen, killing cells, and leading to significant tissue damage. This can cause death or transform regions of the heart into scar tissue, making it more difficult to beat in the future.

Current therapies and drugs for heart attacks, and many other conditions like cancer, are mostly studied in the lab using animal models. However, only one out of 10 therapeutics that work for animals ends up successful in clinical applications. There are also occasional but impactful side effects in humans that are not seen in animals.

“Although animal models give an overall systemic view of how an organism would respond to a pathological condition, it is not the exact response that a human tissue would give,” said author Pinar Zorlutuna. “If you have a human model along with your animal model, chances are that you can catch discrepancies in between the two early on, before taking things to the clinical trial and failing there.”

In vitro human models allow researchers to examine the impact of heart attacks and treatment of the fibrotic tissue outside the body. They use organoids, 3D organlike multicellular models derived from stem cells, to mimic natural development, structural organization, regeneration, and disease progression. Meanwhile, microfluidic devices control cell placement and fluid flow to act like the heart on a chip, while bioprinting allows cardiac tissue to be built up layer by layer.

“These models are very important to push forward what we are doing in preclinical research,” said Zorlutuna. “They can help get therapeutics into more people in a faster, safer, and more efficient manner.”

“Despite advancements in the tissue engineering field, some challenges remain to create in vitro cardiac tissue models because the human heart is a very complex organ,” said author Gozde Basara. “Larger constructs, engineered using mature cardiac cells and quick fabrication methods, would be the next step.”

The team is currently using models to study and identify diagnostic markers for heart attacks. The strategy could be used to catch and prevent cardiovascular diseases in general.