A 15-year-old boy has finally been granted a kidney transplant from his mother that he has waited for since he was five weeks old.

Stephen Gallacher has had posterior urethral valves (PUV) since birth, which causes a blockage between the bladder and urethra.

A pressure build-up in the kidneys caused severe damage, leaving him with a lack of energy and poor appetite.

After many operations and infections, Stephen was put on a waiting list for a kidney transplant in 2015.

He became the 100th person in Scotland to receive a kidney transplant from a living donor – his mother, Cheryl Gallacher, 44 – at Glasgow’s Royal Hospital for Children. 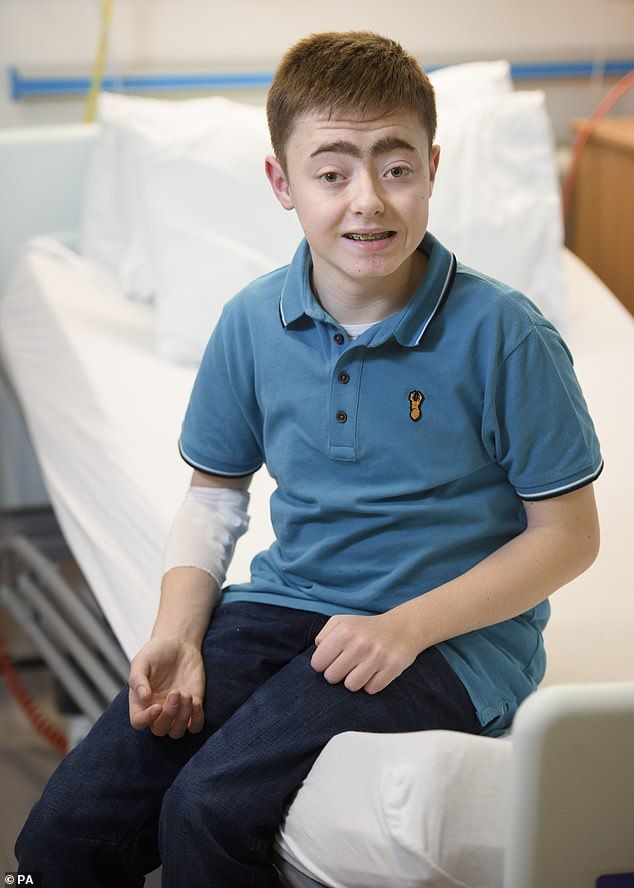 Stephen Gallacher has suffered a lifetime of illness with kidney disease. He has finally been granted a kidney transplant from his mother that he has waited for since he was five weeks old. Pictured, ahead of the transplant at Royal Hospital for Children in Glasgow 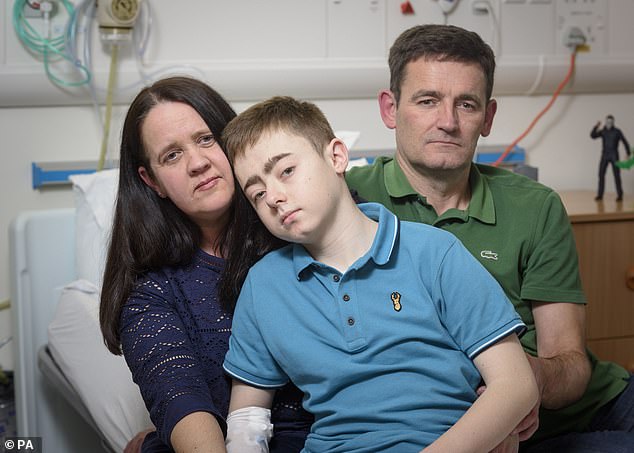 After many operations and infections, Stephen was put on a waiting list for a kidney transplant in 2015. Tests were carried out on both his mother, Cheryl, 44, and father Tommy, 53, to determine who would make the best donor. Pictured, before the procedure 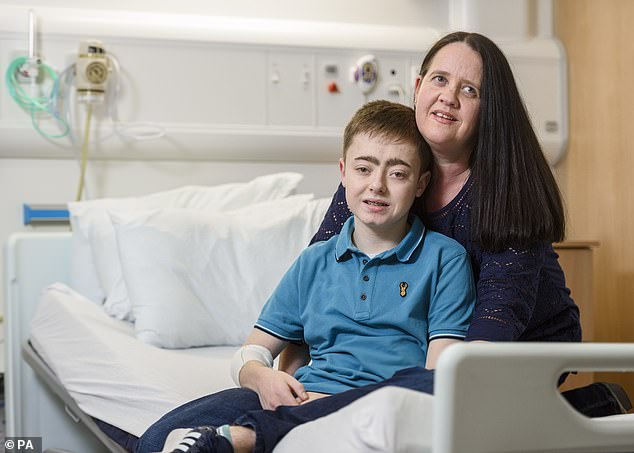 Stephen, from Musselburgh in East Lothian, said ahead of the procedure on Wednesday: ‘I’m grateful for this. I’ve been waiting since I was five weeks old.

‘It’s been big. Like at school, at fun run, I’m most of the time at the back of the line. I can’t do contact (sports) like rugby and football.’

Stephen’s PUV had become severe enough to be treated with surgery in 2015, at which point surgeons started preparing to give him a kidney transplant.

Stephen had not needed dialysis for his kidney disease, but has been on medication ever since the diagnosis.

Tests were carried out on both his mother and father Tommy, 53, to determine who would make the best donor for what is known as the living related donor (LRD) procedure.

Initially it was thought that Mr Gallacher would be the donor, but tests ultimately confirmed Stephen’s mother as being the most suitable match.

Speaking shortly before he went into surgery, Stephen admitted to feeling anxious ahead of the operation but was looking forward to the positive benefits it is going to bring him.

He said: ‘Mum will be fine. Dad will have to look after us. I’m going to feel much healthier, I’m going to run faster, I’ll be bigger. 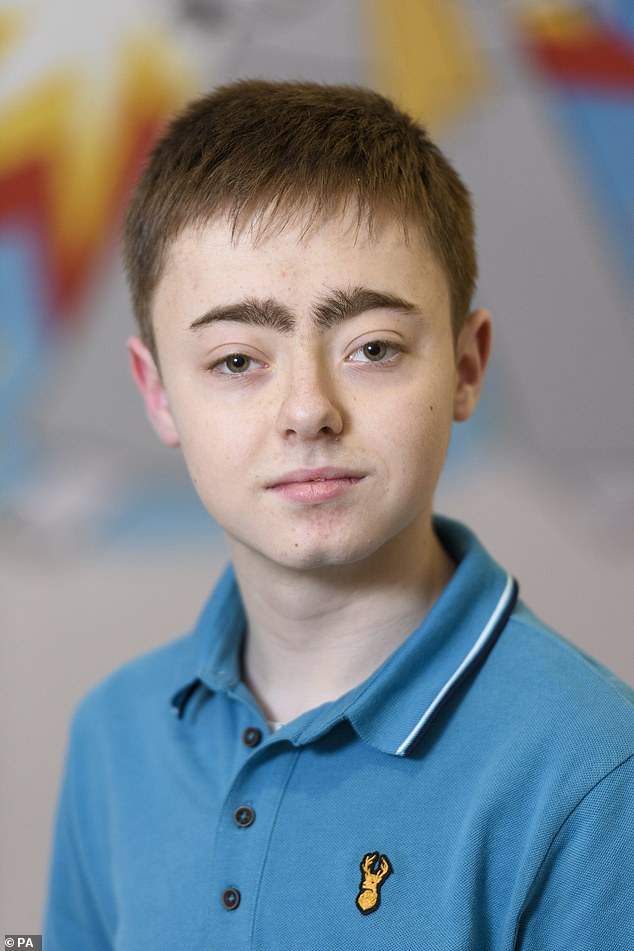 Stephen Gallacher was diagnosed with posterior urethral valves (PUV) at birth. The condition, which causes a blockage between the bladder and urethra, was treated. But a pressure build-up in the kidneys caused severe damage, leaving him with a lack of energy and poor appetite 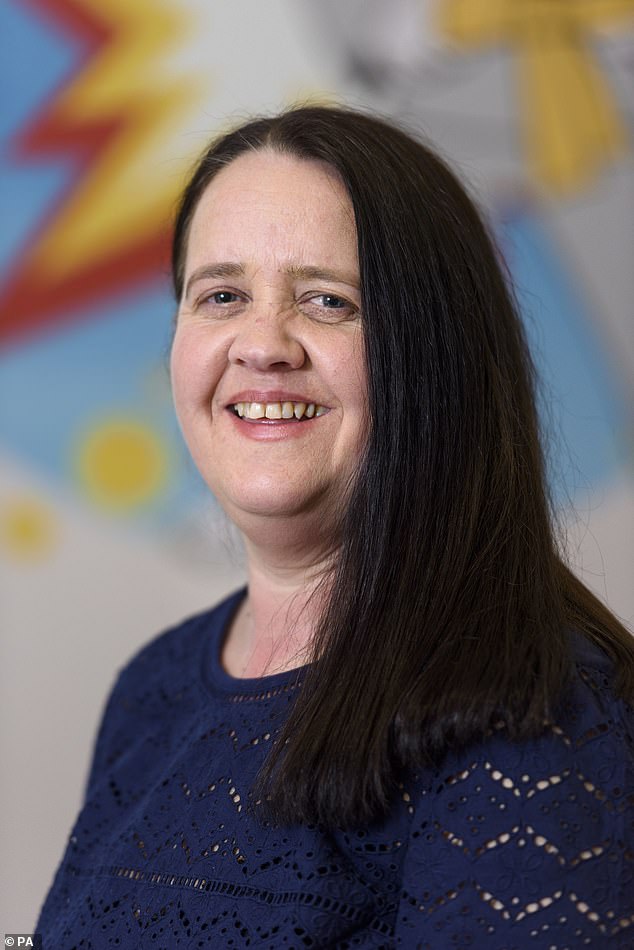 Mrs Walker has been on a health kick for three years in preparation for donating the kidney, which she said she didn’t need to think twice about doing for her son 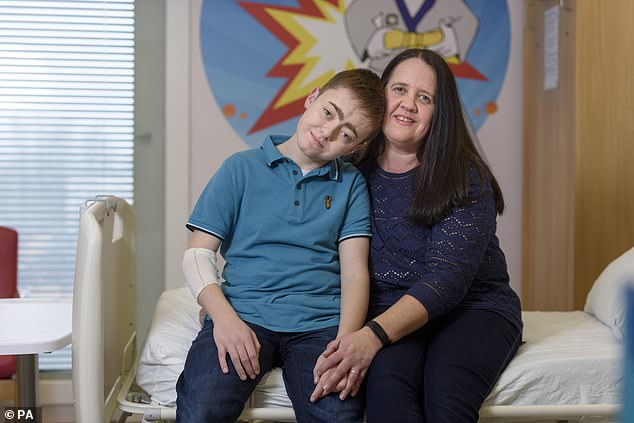 Mrs Walker, pictured with Stephen the day before the procedure on Wednesday, said her son was a ‘wee warrior’

WHAT IS INVOLVED IN A KIDNEY TRANSPLANT?

The kidneys have several important functions in the body including filtering waste out of the bloodstream and eliminating excess water or toxins in the urine.

People need a kidney transplant if they have severe kidney disease or if the organ is failing.

To determine if someone is a match to donate a kidney, they have to have matching blood types with the receiver.

If this isn’t possible, doctors can lower the antibody levels in both people to see if the organ can still be a match.

Tissue typing tests (HLA) are taken to also determine if the body will reject or accept the intended donor organ.

Parents and siblings are 50 per cent likely to match with someone who needs a donation.

The numbers drop for people outside of the family.

But the most common way that people receive a kidney donation is from someone who has died.

And many people struggle to find a match that is suitable for them.

People can spend years on the transplant list and on dialysis while waiting for a donor match.

Like most surgical procedures, a kidney transplant can cause short-term risks such as blood clots and infection.

Long-term risks can be weight gain, high blood pressure and an increased risk of cancer.

‘I’ll be able to eat stuff I haven’t eaten before like cucumbers and tomatoes.’

The operation coincidentally saw Stephen become the 250th child in Scotland to receive a kidney transplant from any donor, living or deceased.

The Royal Hospital for Children in Glasgow is the only base in Scotland where paediatric kidney transplants are carried out.

Mrs Gallacher has described her son, who spent most of the first year of his life in hospital, as a ‘wee warrior’.

She said: ‘We always knew when he was small there was a possibility as he got older he was going to need it (a transplant).

‘When it all came to light, obviously it’s your child, you’re not going to hesitate and not get tested for it.’

Mrs Gallacher, who didn’t think twice about giving her kidney, said she had been on a health drive to prepare, stopping smoking more than three years ago and losing weight at a boot camp.

She said: ‘I’m a lot fitter than what I had been because I knew I had to do it and that was it.

‘I’m delighted that I can do this for Stephen and hopefully make him a lot better.

‘I’d be lying if I wasn’t saying I was anxious. But it’s something Stephen’s needing and obviously if I’m going to be unwell it’s a risk I’m willing to take for him.

‘I’ll be in quite a bit of pain for the first few days at least, but I’ve just got to take it easy myself because I’ve got to get better and stronger to help Stephen recover.’

Dr Ben Reynolds, who has been overseeing the operation, said: ‘We’ve been doing paediatric transplants here in the Glasgow children’s hospital since 1977 and that was from a deceased donor. 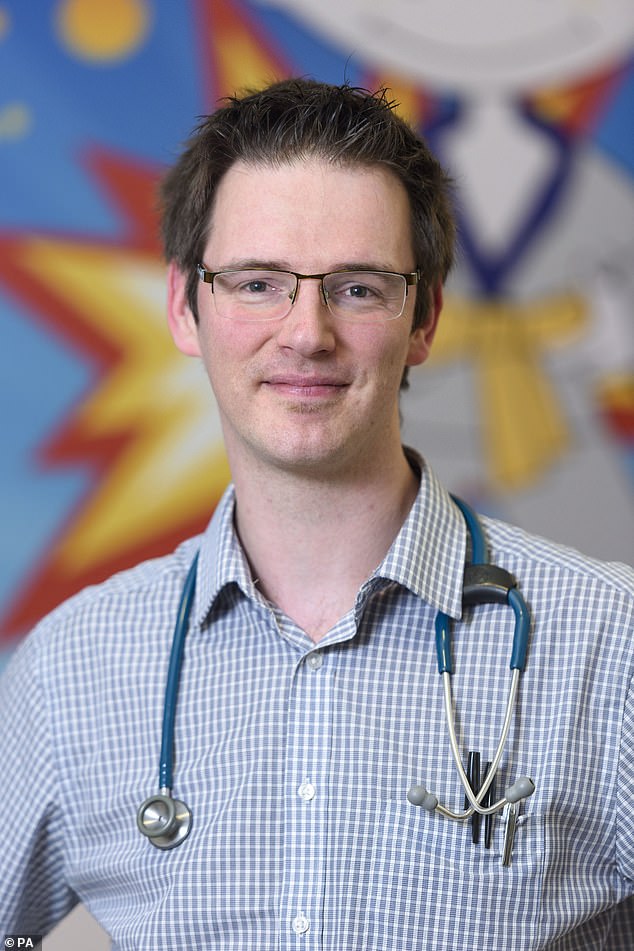 Dr Ben Reynolds, consultant paediatric nephrologist, at the Royal Hospital for Children in Glasgow, said Stephen’s transplant is a landmark, being the 100th live kidney donation

‘In that time we have now had kidney transplants put into 250 patients.

‘Stephen is our 250th patient and he is receiving our 100th kidney from a live person.

‘We’re tremendously excited to have reached this landmark.’

Stephen now faces a recovery time of around two weeks in hospital, before resting at home for a while.

Mrs Gallacher said: ‘He’s been through a lot. He doesn’t let anything hold him back, that’s one good thing about his health problems.

‘He just keeps going and does what he can.’

One of the medics involved in Stephen Gallacher’s landmark operation has told of the power of organ transplants to change lives.

Dr Ben Reynolds, a paediatric consultant nephrologist at Glasgow’s Royal Hospital for Children, said the 15-year-old can expect to see ‘massive’ health benefits when he is fully recovered from the major surgery.

‘If anyone ever asks you if you would consider giving an organ then your answer should be “Yes”.’

In Stephen’s case, the damage to his kidney probably happened in the womb, but was not identified until he was a little older.

Dr Reynolds explained: ‘Stephen had quite severe kidney disease when we first met him and we knew at that point that he was very likely to need a transplant in the coming years.

‘What we like to do is avoid dialysis in children where we can.

‘What is essential for that is having a donor who is available so that the operation can be planned.

‘Stephen’s situation was exactly that; his mum was willing to be considered as a kidney donor.

‘Stephen did well and his blood tests were quite stable for some time but over the last few months he was a little bit more tired and we recognised that now is a good time for him to have the transplant before he would need dialysis, what we call a pre-emptive transplant.

‘He’s at a perfect time to do it and his mum was in perfect health to give her kidney to him.’

According to Organ Donation Scotland, in the past decade, more than 800 people in Scotland have transformed the lives of others by becoming living kidney donors.

‘Now, almost half of all kidney donations come from living donors.’

Donations can be ‘directed’, where a friend, relative or partner donates to a loved one, or ‘non-directed’ or ‘altruistic’ donations in which a person gives to a stranger on the transplant waiting list.

‘Organ transplantation is almost always the best thing for a patient on, or approaching, dialysis.’

He acknowledged that any surgical procedure has risks associated with it, but stressed that the potential benefits of receiving a new kidney make undergoing surgery worthwhile.

Speaking on Thursday’s World Kidney Day, he said: ‘Kidney disease is very bad for you, but dialysis is also not good for you.

‘In most cases, transplant is absolutely the best thing for you.

‘So even though there are risks associated with this operation, we do something that we very rarely do, which is taking mum Cheryl’s kidney out, making a health person slightly less healthy – because we know that the benefit to Stephen will be massive.’