Takeaway customers will be shown calorie counts for the first time under a drive to encourage healthier eating.

Up to 500 restaurants and take-away outlets which are served by Deliveroo will publish calorie contents online from next month.

They will include high street chains such as Burger King and KFC as well as independent curry houses, fish and chip bars and kebab shops.

The move by Deliveroo – the country’s second-largest takeaway provider – comes ahead of Government plans to force restaurants to print calorie counts on their menus. 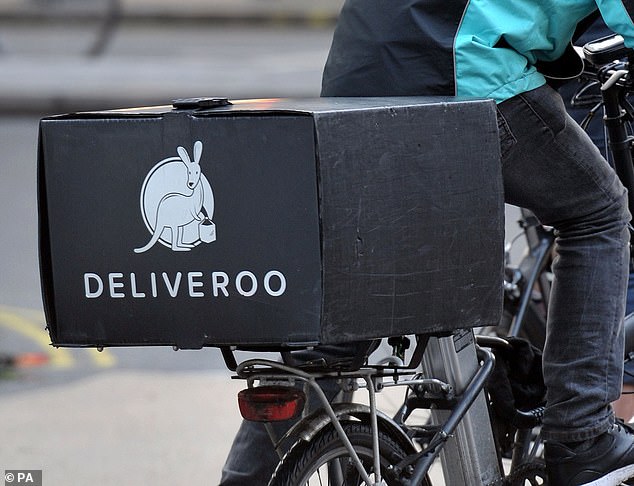 Department of Health officials are considering making calorie labelling a legal requirement as part of their ongoing childhood obesity strategy.

But Treasury ministers are reportedly trying to block the measures, fearing they will be a huge burden for small firms.

A Government spokesman yesterday insisted they were still pressing ahead with plans to help families choose healthier foods when eating out.

From next month, Deliveroo will begin publishing calorie counts for 500 restaurants and takeaway outlets but by the end of the year they expect this number to rise to ‘several thousand’.

Customers will be able to see the information immediately when ordering dishes from its website or app.

Currently just a few of the larger restaurants provide calorie breakdowns and these can only be viewed on their own websites.

Obesity rates in the UK are the third worst in Europe and our growing reliance on convenience foods is one of the main drivers.

The Government estimates that a quarter of our calorie intake now comes from meals and snacks eaten ‘outside the home’. 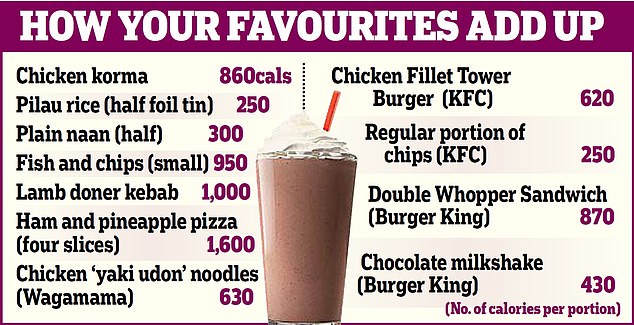 Portion sizes in restaurants and takeaway joints are larger than we would serve up if cooking ourselves and foods are denser in calories.

A spokesman for Deliveroo said the move to publish calories was partly in response to demand from customers.

The firm wants to overhaul the image of takeaways from a guilty Friday night pleasure to a convenient, low-fat mid-week lunch or dinner.

But some of the information may shock, as a chicken korma contains 860 calories while half a foil tin of pilau rice adds 250 calories.

A small portion of fish and chips has 950 calories and there are about 1,000 in a lamb doner kebab.

Will Shu, founder and chief executive officer of Deliveroo, said: ‘Consumers should have amazing food whenever and wherever they want it, but Deliveroo wants to also enable customers to be aware of what they’re eating.’

They will be urged to follow the example of KFC which provides salads and ‘Ricebox’ meals at between 300 and 500 calories.

But Chris Snowden, of the Institute of Economic Affairs think tank, said: ‘Calorie labelling is a nice idea in principle but it would be disastrous for pubs, restaurants and cafes in practice.

‘Large chains with fixed menus will have no problem complying, but it will be hugely burdensome for smaller establishments.’