Dogs could be trained to detect malaria by sniffing used socks, research suggests.

Scientists found trained sniffer dogs were up to 70 per cent accurate in detecting the deadly disease.

The Durham University researchers hope the non-invasive test could be used to quickly diagnose and treat patients.

Figures show there were around 216 million cases of malaria – spread by parasites through mosquito bites – in 2016 alone.

Popstar Cheryl Cole is one of the most famous people to have caught malaria, after being struck down on holiday in Tanzania in 2010. 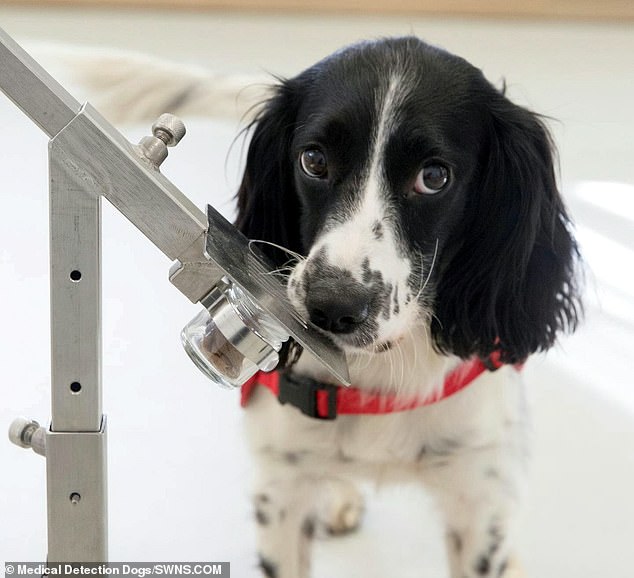 Trained sniffer dogs can smell malaria in the socks of infected children. Pictured is the Springer Spaniel Freya, who was the third pooch to be taught how to detect the disease and was trained after the study ended. The dogs were correct up to 70 per cent of the time 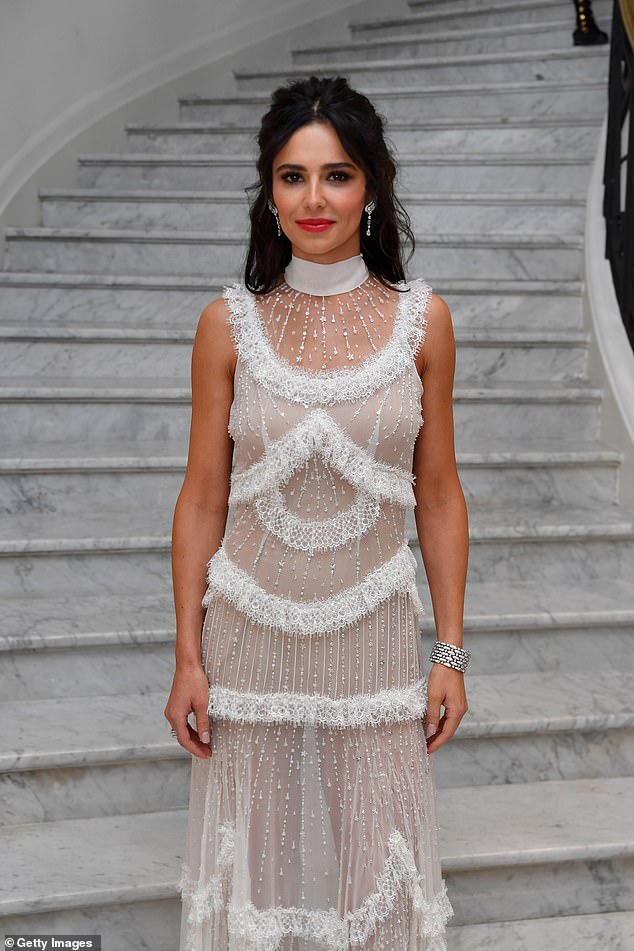 Popstar Cheryl Cole is one of the most famous malaria sufferers and is believed to have caught the disease aged 27 while on holiday in Tanzania with her dancer friend Derek Hough. The ex-Girls Aloud singer and X Factor judge is pictured at the Cannes Film Festival in May this year

The researchers collected 175 ‘foot odour samples’ from nylon socks worn by children aged between five and 14 from the Upper River Region of The Gambia.

A simple finger-prick test was also carried out on the youngsters to determine if they had the malaria parasite Plasmodium falciparum in their blood.

The sock samples were then transported to the Medical Detection Dogs (MDD) charity in Milton Keynes.

While there, two dogs – a Labrador-Golden Retriever cross called Lexi and a Labrador named Sally – were trained to distinguish between the scent of children infected with malaria and those without the parasite.

Blood tests revealed 30 of the children had malaria, while the remaining 145 were not infected.

The research is being presented at the American Society of Tropical Medicine and Hygiene Annual Meeting in New Orleans.

Although in its early stages, the scientists hope the sniffer dogs will be used to help diagnose and treat malaria sufferers earlier.

The animals could also prevent the disease spreading between countries, they add.

‘While our findings are at an early stage, in principle we have shown that dogs could be trained to detect malaria infected people by their odour with a credible degree of accuracy,’ lead author Professor Steve Lindsay said.

‘This could provide a non-invasive way of screening for the disease at ports of entry in a similar way to how sniffer dogs are routinely used to detect fruit and vegetables or drugs at airports.

‘This could help prevent the spread of malaria to countries that have been declared malaria-free.

‘And also ensure that people, many of whom might be unaware that they are infected with the malaria parasite, receive antimalarial drug treatment for the disease.’

The sniffer-dog test may be particularly useful in countries that have the malaria parasite, but the number of sufferers are low, the scientists add.

Confirmation of the disease would then be made by taking a finger-prick blood sample. 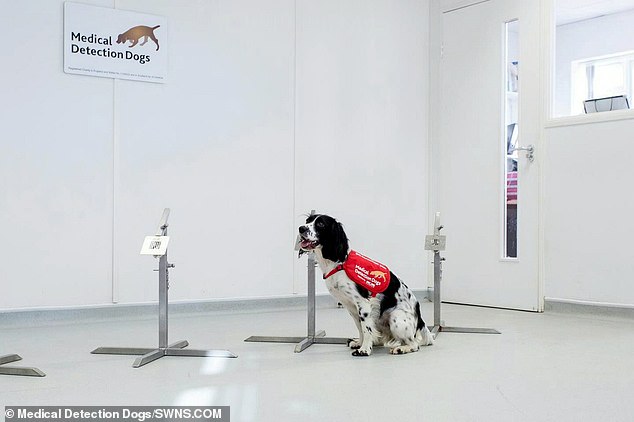 Pictured at work, Freya’s colleagues – a Labrador-Golden Retriever cross called Lexi and a Labrador named Sally – were trained to distinguish the scent of 175 socks worn by children infected with malaria from those without the parasite. A blood test confirmed the diagnosis 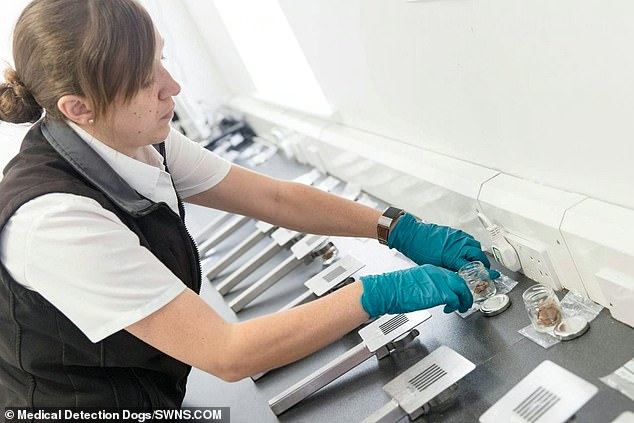 A lab scientist is pictured preparing the sock samples, which were taken from children living in the Upper River Region of The Gambia and transported to the Medical Detection Dogs charity in Milton Keynes. The researchers hope their study will help treat malaria quicker 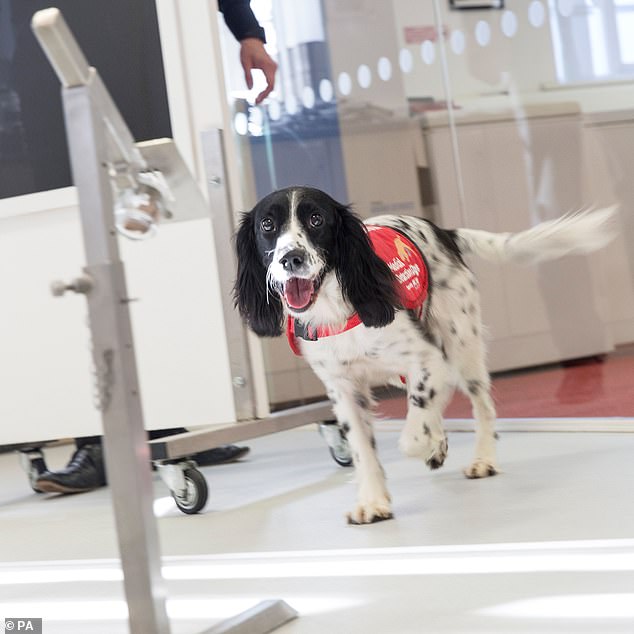 Scientists described the finding that dogs can be trained to detect malaria as ‘extremely exciting’ for the future. Pictured is Freya walking around a laboratory where she learnt to smell the parasite responsible for the disease

Malaria is a serious tropical disease spread by mosquitoes.

Unless treated promptly, it can be fatal.

These usually occur seven to 18 days after infection.

The main risk areas are large regions of Africa and Asia, and Central and South America.

Malaria can be prevented by applying insect repellent, sleeping beneath a special net, and covering your arms and legs.

Antimalarial medication should be taken if necessary.

Treatment varies but may include antimalarial drugs.

Nearly half of the global population is at risk of malaria, according to the World Health Organization (WHO).

Since the initial study, a third pooch – a Springer Spaniel called Freya – has also been trained to detect malaria.

‘This is the first time we have trained dogs to detect a parasite infection and we are delighted by these early results,’ Dr Guest said.

‘The possible potential to train dogs to detect tropical disease where diagnostics are poor, such as leishmaniasis and trypanosomiasis is huge.

‘I believe that this study indicates that dogs have an excellent ability to detect malaria and if presented within an individual infected with the parasite or a piece of recently worn clothing, their accuracy levels will be extremely high.

‘This is a reliable, non-invasive test and is extremely exciting for the future.’

Further studies are required to determine if dogs can detect malaria in the odour of infected people from other parts of the world before the test can be used in real life, the scientists add.

Nearly half of the global population is at risk of malaria, according to the World Health Organization (WHO).

Approximately 90 per cent of cases occur in Sub-Saharan Africa.

The disease is caused by parasites that are transmitted to people via the bites of infected female Anopheles mosquitoes.

It can be prevented and cured with antimalarial drugs.