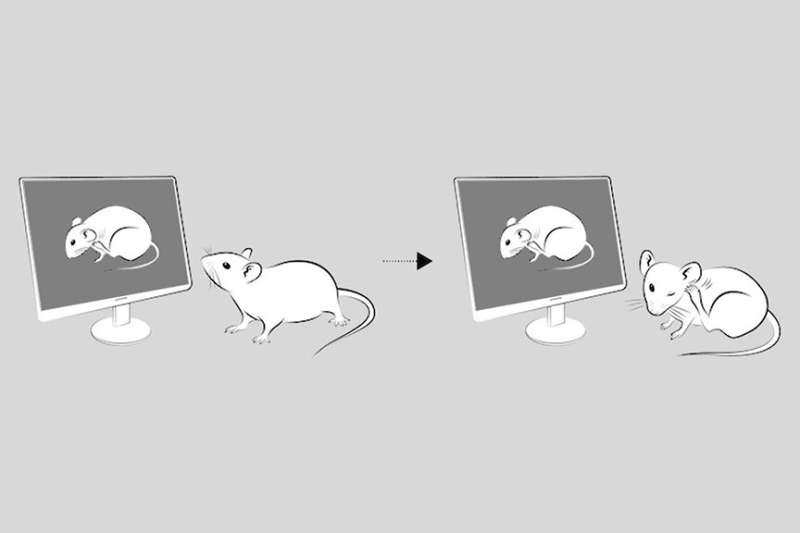 Researchers at Washington University School of Medicine in St. Louis have identified a pathway in the brains of mice that is activated when the animals see other mice scratching. The researchers had previously reported that the urge to scratch an itch after seeing other mice scratching is hardwired in the brain. Now they have found that this so-called “contagious itching” is controlled through a visual pathway, that surprisingly, operates independently of the visual cortex, the area of the brain that processes visual information.

The new findings advance understanding of the triggers that spur itching, and eventually may point to solutions to quell itch-related conditions in people. The work also provides more evidence that some cells in the retina not previously linked to vision actually may assist us as we see.

The new study is published Oct. 4 in the journal Cell Reports.

“This contagious itch—which is a reflex response in mice, just as grooming is—must be somehow important for survival,” said principal investigator Zhou-Feng Chen, Ph.D., director of the Washington University Center for the Study of Itch & Sensory Disorders. “We humans also experience contagious itch, but we have found that in mice such itching is controlled through a pathway that was not known to be responsible for ‘seeing’ things. That could mean this sort of imitative scratching behavior is an ancient, protective behavior.”

Using techniques to disable the visual cortex, the researchers found that even a mouse without a functioning visual cortex will scratch when it encounters another doing the same.

In a series of detailed experiments, Chen’s team found that reacting when other mice scratch requires a set of specialized cells in the retina of the mouse’s eye. These cells, known as intrinsically photosensitive retinal ganglion cells (ipRGC), connect to the suprachiasmatic nucleus, a tiny brain region responsible for controlling circadian rhythm, triggering activation of the scratching cascade. In 2017, the same research team discovered that the suprachiasmatic nucleus was highly active when mice began to scratch after seeing videos of other mice scratching.

“If you delete the specific neuropeptide that carries signals from ipRGCs, the mice don’t scratch, whether or not the visual cortex is intact,” he explained. “Mice without functional visual cortexes are able to detect this scratching motion, and so they scratch. It’s a behavior that seems relevant to their survival.”

He compares the phenomenon to when a frog catches an insect for food. Frogs don’t have visual cortexes in their brains, but their eyes are very sensitive to movement. They can tell when an insect flies in a certain pattern or direction and then can stick out their tongues to catch and eat it. Chen believes something similar occurs with the contagious itch response in mice.

“We found that ipRGCs and some cells in the brain’s suprachiasmatic nucleus are very sensitive to a mouse’s scratching movement,” he said. “We humans also get itchy when we see other people scratch, and we tend to yawn when we see other people yawn, but it’s not clear whether the reflex has any use for us. In humans, the pathway for contagious itch may be different from what we’ve seen in mice. It’s likely the human response requires the visual cortex. But in people, contagious itch may be just an evolutionary remnant. You have to go back to animals, like these mice, to learn why these types of behaviors may once have been, or may still be, important to survival.”

Perhaps, he said, since mice are nocturnal and often in dark places, it may be important for them to know whether the area they move around in could be full of insects, such as mosquitoes. Because of their poor eyesight, one way for mice to know this is to see what other mice are doing. If nearby mice begin to scratch, that could be a warning signal that biting mosquitoes or other insects are swarming.

“You had better scratch now before the mosquitoes bite you, too,” he said. “This kind of contagious behavior is widespread in the animal world.”