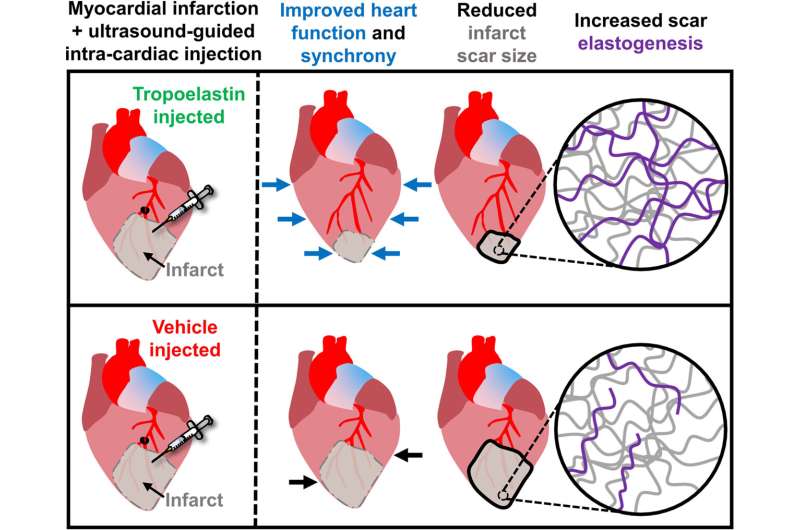 After a heart attack, the shock of the event leaves behind a trail of damaged heart muscle, which becomes a scar over time. However, the scar tissue doesn’t have the elasticity and flexibility of healthy heart muscle, meaning there can be complications with pumping and transporting blood.

For the first time, an international team of researchers has developed a method to reverse the loss of elasticity of damaged heart tissue following heart attacks.

Heart disease is currently the largest cause of death globally.

Preclinical studies in rats have found that a single injection of tropoelastin into the wall of the heart in the days following a heart attack could “turn back the clock” on muscle damage, making the scars “stretchier” and help improve the heart’s ability to contract. Tropoelastin is the protein building block that gives human tissue its elasticity and ability to stretch.

The results are published in Circulation Research and represent the first time this potential of tropoelastin in treating heart disease has been investigated.

“This research showcases the potential of tropoelastin in heart repair and suggest further work will show exciting possibilities of its role in future treatments and therapies,” says lead researcher Dr. Robert Hume, who conducted the research at the Westmead Institute for Medical Research. Dr. Hume is currently based at the University of Sydney’s Charles Perkins Centre.

Four days after a heart attack, purified tropoelastin was injected into the heart.

Co-author Professor Anthony Weiss from the Charles Perkins Centre and Faculty of Science explained, “Tropoelastin can repair the heart because it is a precise replica of the body’s natural elastic protein.”

For this injection, the researchers used a new surgical method utilizing ultrasound to guide the needle into the heart wall, which is less invasive than previous methods.

After 28 days the researchers found the heart muscle, originally damaged and scarred at the beginning, had regained its elasticity and its muscle function resembled that before the heart attack.

Further tests found that tropoelastin reduces scar size and essentially stabilizes it by increasing its elastin content and therefore decreasing the stiffness of the scar.

Additional experiments on human cardiac fibroblasts (a subset of human heart cells responsible for maintaining the structure of a normal heart) in a petri dish showed that after the cells were treated with tropoelastin, they were able to generate elastin, a crucial protein that gives human tissue elasticity and the ability to stretch.

“What we have found is highly encouraging,” says senior author Associate Professor James Chong. “We hope to continue developing the method so it can eventually be used in a clinical setting and used to treat and improve the lives of the millions of heart failure patients worldwide.”