WASHINGTON — The Justice Department is suing to stop a Philadelphia group from opening what some public health experts and mayors consider the next front in fighting the opioid epidemic: a place where people who inject fentanyl and other illicit drugs can do so under medical supervision.

The nonprofit group, Safehouse, was formed last year to house the country’s first so-called safe injection site in Philadelphia, which has one of the nation’s highest rates of overdose deaths. Safehouse had been planning to open the site as soon as next month, and recently hired a team of lawyers in anticipation of a crackdown by the Trump administration.

At the site, a nurse practitioner or other medical provider would supervise and be ready to respond should anyone overdose after injecting drugs they brought in. The site would also provide clean needles, wound care and referrals to addiction treatment and legal services.

The concept has raised not only legal but philosophical objections from people who say they cannot accept the idea of medical-sanctioned use of illegal drugs, even if the aim is to save lives. Their objections are similar to those made against needle exchanges when they first began opening several decades ago, though exchanges now generally have strong support as an evidence-backed tool for reducing disease and death.

It was not immediately clear whether Safehouse would put its plans on hold while the matter played out in court.

San Francisco, New York, Seattle, Denver and Boston have also seriously considered safe injection sites as a way to reduce overdose deaths at a time when synthetic fentanyl is spreading and killing many who inject it, often within minutes. Deaths involving fentanyl increased by more than 45 percent in 2017 alone, making up almost 70 percent of all opioid overdose deaths that year. 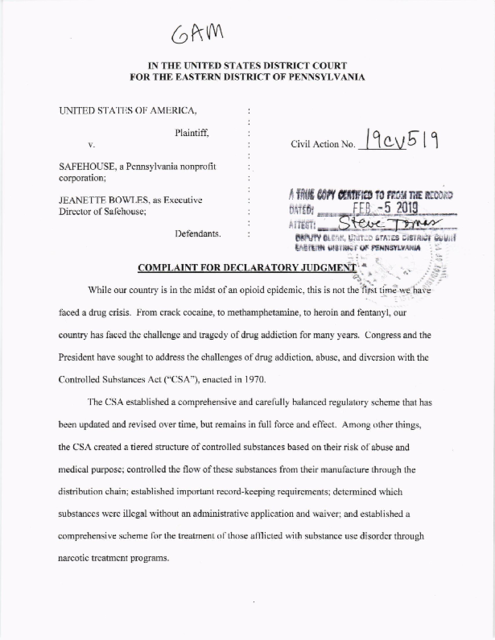 The lawsuit, filed in the United States District Court for the Eastern District of Pennsylvania, asks the court to declare that injection sites are illegal under the federal Controlled Substances Act. That law makes it illegal “to manage or control any place, regardless of compensation, for the purpose of unlawfully using a controlled substance,” according to the complaint.

At a news conference in Philadelphia, William M. McSwain, the United States attorney for the Eastern District of Pennsylvania, spoke at length against the concept of sanctioning illicit drug use and questioned whether it would cut overdose deaths.

“Normalizing use of deadly drugs like heroin and fentanyl is not the answer to solving the opioid epidemic,” Mr. McSwain said.

In filing a civil rather than a criminal complaint, he added, the Justice Department is taking “a moderate, incremental reasonable step” and “not, in my view, being heavy handed in any way.” 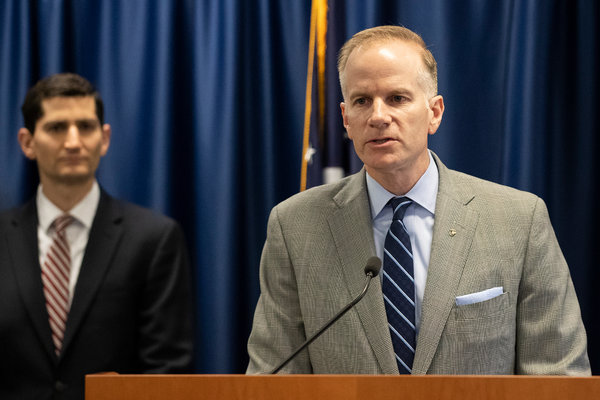 Representatives of Safehouse said they disagreed with Mr. McSwain’s interpretation of the law and were committed to defending their plan in court.

“We have consistently maintained that our disagreement may need to be resolved by the fair and impartial judicial system,” said Ronda Goldfein, a member of the Safehouse board of directors.

A lawyer for Safehouse, Ilana Eisenstein, added, “We are committed to defending Safehouse’s effort to provide lifesaving care to those at risk of overdose through the creation of safe injection facilities.”

Last fall, with support from city officials, Edward Rendell, a Democrat who is a former mayor of Philadelphia and a former governor of Pennsylvania, incorporated Safehouse along with Ms. Goldfein and Jose Benitez, who runs the city’s only syringe exchange.

Larry Krasner, Philadelphia’s district attorney, said he wouldn’t prosecute anyone involved with Safehouse, and the city’s health commissioner, Thomas Farley, is an adviser.

San Francisco had been ready to open a safe injection site last year, but Gov. Jerry Brown vetoed a measure that would have protected people who worked there or used the facility from prosecution. In New York, Mayor Bill DeBlasio announced plans last spring to open four safe injection sites if he got state approval, which is still pending.

While Philadelphia’s would be the first safe injection site to openly operate in the United States, at least one other has been operating clandestinely for several years.

Proponents of safe injection sites say the science is on their side, pointing to studies of sites in Canada, Australia and Europe that suggest the sites may not only reduce overdose deaths but help reduce transmission of H.I.V. and hepatitis C, and get more people into treatment.

But critics point out that the research so far is limited. Mr. McSwain pointed to one study done for Philadelphia that warned the existing research had major limitations, even as it concluded that a safe injection site in Kensington, one of Philadelphia’s hardest-hit neighborhoods, “could anticipate substantial reductions in overdose deaths.”

Staff at the Philadelphia site, which would include social workers and recovery coaches as well as medical personnel, would all know how to perform CPR and how to use naloxone, the overdose-reversing drug that has saved thousands of lives.

The Controlled Substances Act includes a so-called “crack house statute” that makes it a felony to knowingly maintain a place for using a controlled substance. But supporters of safe injection sites say they don’t believe Congress intended it to include places that exist for public health reasons, under medical supervision.

The federal lawyers working on to the case include Joseph H. Hunt, the assistant attorney general in charge of the Justice Department’s civil division.

“This is definitely a national issue,” Mr. McSwain said.