On most afternoons, people arrive from across New York City with backpacks and plastic bags filled with boxes of small plastic strips, forming a line on the sidewalk outside a Harlem storefront.

Hanging from the awning, a banner reads: “Get cash with your extra diabetic test strips.”

Each strip is a laminate of plastic and chemicals little bigger than a fingernail, a single-use diagnostic test for measuring blood sugar. More than 30 million Americans have Type 1 and Type 2 diabetes, and most use several test strips daily to monitor their condition.

But at this store on W. 116th Street, each strip is also a lucrative commodity, part of an informal economy in unused strips nationwide. Often the sellers are insured and paid little out of pocket for the strips; the buyers may be underinsured or uninsured, and unable to pay retail prices, which can run well over $100 for a box of 100 strips.

Some clinicians are surprised to learn of this vast resale market, but it has existed for decades, an unusual example of the vagaries of American health care. Unlike the resale of prescription drugs, which is prohibited by law, it is generally legal to resell unused test strips.

And this store is far from the only place buying. Mobile phones light up with robo-texts: “We buy diabetic test strips!” Online, scores of companies thrive with names like TestStripSearch.com and QuickCash4TestStrips.com.

“I’m taking advantage, as are my peers, of a loophole,” said the owner of one popular site, who asked that his name not be used. “We’re allowed to do that. I don’t even think we should be, frankly.”

Test strips were first developed in 1965 to provide an immediate reading of blood sugar, or glucose, levels. The user pricks a finger, places a drop of blood on the strip, and inserts it into a meter that provides a reading.

The test strips were created for use in doctors’ offices, but by 1980 medical-device manufacturers had designed meters for home use. They became the standard of care for many people with diabetes, who test their blood as often as ten times a day.

Test strips are a multi-billion-dollar industry. A 2012 study found that among insulin-dependent patients who monitor their blood sugar, strips accounted for nearly one-quarter of pharmacy costs. Today, four manufacturers account for half of global sales. 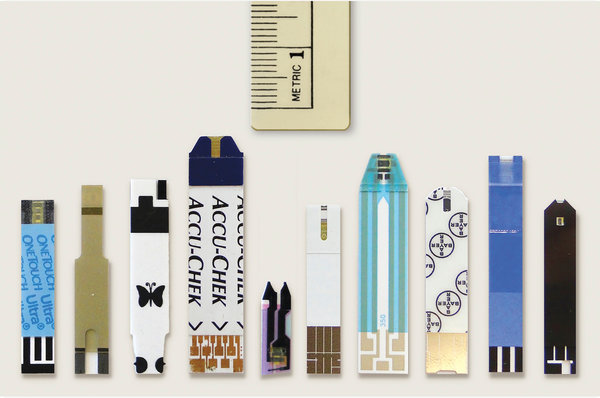 In a retail pharmacy, name-brand strips command high prices. But like most goods and services in American health care, that number doesn’t reflect what most people pay.

The sticker price is the result of behind-the-scenes negotiations between the strips’ manufacturer and insurers. Manufacturers set a high list price and then negotiate to become an insurer’s preferred supplier by offering a hefty rebate.

These transactions are invisible to the insured consumer, who might cover a copay, at most. But the arrangement leaves the uninsured — those least able to pay — paying sky-high sticker prices out of pocket. Also left out are the underinsured, who may need to first satisfy a high deductible.

For a patient testing their blood many times a day, paying for strips out-of-pocket could add up to thousands of dollars a year. Small wonder, then, that a gray market thrives. The middlemen buy extras from people who obtained strips through insurance, at little cost to themselves, and then resell to the less fortunate.

That was the opportunity that caught Chad Langley’s eye. He and his twin brother launched the website Teststripz.com to solicit test strips from the public for resale. Today they buy strips from roughly 8,000 people; their third-floor office in Redding, Mass., receives around 100 deliveries a day.

The amount the Langleys pay depends on the brand, expiration date and condition, but the profit margins are reliably high. For example, the brothers will pay $35 plus shipping for a 100-count box of the popular brand Freestyle Lite in mint condition.

The Langleys are mainly buying up excess strips from insured patients who have been flooded with them, sometimes even when not medically necessary.

Although patients who manage their diabetes with non-insulin medications or with diet and exercise needn’t test their blood sugar daily, a recent analysis of insurance claims found that nearly one in seven patients still used test strips regularly.

‘It’s a tiny little piece of plastic that’s super cheap to manufacture, and they’ve managed to make a cash cow out of it.’

The market glut is also a consequence of a strategy adopted by manufacturers to sell patients proprietary meters designed to read only their brand of strips. If a patient’s insurer shifts her to a new brand, she must get a new meter, often leaving behind a supply of useless strips.

While some resellers use websites like Amazon or eBay to market strips directly to consumers, the biggest profits are in returning them to retail pharmacies, which sell them as new and bill the customer’s insurance the full price.

Glenn Johnson, general manager for market access at Abbott Diabetes Care, which makes about one in five strips purchased in the United States, said manufacturers lose more than $100 million in profits a year this way, much of it in New York, California and Florida.

The company supported a new California law that prohibits pharmacies from acquiring test strips from any but an authorized list of distributors. Mr. Johnson said he has spoken with lawmakers about similar efforts in Florida, New Jersey, New York and Ohio.

In a lawsuit against P.B.M.’s and the dominant test strip manufacturers filed in New Jersey, consumer advocates presented data showing that the average wholesale price for test strips has risen as much as 70 percent over the last decade.

They alleged that this has allowed the defendants to pocket an unfair portion of the rebates. The price of a strip would be much lower if it wasn’t fattened by profiteering, said Gretchen Obrist, one of the lawyers who brought the case.

“It’s a tiny little piece of plastic that’s super cheap to manufacture, and they’ve managed to make a cash cow out of it,” she said.

To justify the rising price of strips, manufacturers point to advances in engineering that have made the strips smaller and more convenient to use. But there is little evidence those features have improved health outcomes for people with diabetes — and with increasingly unaffordable prices, the newfangled test strips may be even less accessible.

The markups on strips look particularly stark when compared to the cost of producing them.

“Test strips are basically printed, like in a printing press,” said David Kliff, who publishes a newsletter on diabetes. “It’s not brain surgery.”

He estimated the typical test strip costs less than a dime to make.