Researchers present insight into the neural cartography of smell 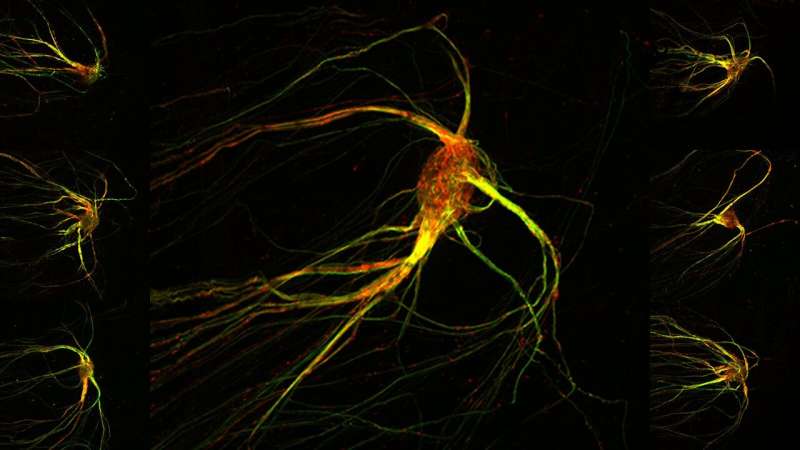 Rendering the invisible visible is among scientists’ favorite challenges.

The sea creature-like images are microscopic portraits of brain cells that make sense of otherwise invisible smells, such as the aroma of a rose or the stench of a rotten egg. The graceful red and green streaks reveal cells in a mouse brain’s smell center: its olfactory bulb. The olfactory bulb is organized into hundreds, even thousands, of segregated clusters, called glomeruli, and each glomerulus responds in a specific way to the thousands of odor chemicals floating in the air. The image above shows a single glomerulus in which signal-carrying projections (axons) from sensory cells in the nose have converged.

Each glomerulus receives signals from its own subset of olfactory neurons, which are randomly distributed in an animal’s nose, yet all tuned to detect odor the same way. Since the 1990s, researchers have known that each of these subsets of olfactory neurons bears a uniquely shaped receptor protein (thanks to a randomizing gene-based process) that latches specifically onto a different odor molecule.

And that presents quite the neuroscientific mystery: How can each randomly located, odor-detecting cell in the nose manage to send signals to just one specific glomerulus within the olfactory bulb? This feat is akin to, say, 50 friends who are originally separated in random places in a city making their way to the same apartment without initially having the address. Somehow they inherently all know where to go.

A pivotal insight into how the olfactory system achieves its wiring precision appears to be in hand. In a study published today in Cell, Zuckerman Institute Principal Investigator Stavros Lomvardas, Ph.D., and MD-Ph.D. candidate Hani Shayya led a team that teased out what they suspect is the central organizing process in mice between the nose’s sensory cells and their glomeruli targets in the brain’s olfactory bulb.

The heart of their discovery resides in the shape of each receptor protein as it assumes its unique 3D form within a tubular component of the cell known as the endoplasmic reticulum (ER). Each protein’s shape is determined by the unique sequence of its amino acid components.

Each of these amino acid sequences, the researchers found, imposes a measurable degree of stress on the ER (imagine stuffing various objects into a sock). In ways not yet known, these different degrees of ER stress act like a dial setting.

Each setting triggers a gene-directed process by which the sensory cells effectively direct their axons (via patterns of “guidance molecules”) to their target glomeruli within the olfactory bulb. This way, each subset of sensory cells with the same-shaped receptor protein ends up projecting its axons to the very same glomerulus. Without a receptor-glomerulus mapping of this kind, a rose could end up smelling like a rotten egg and vice versa.

“It is mind-blowing,” said Dr. Lomvardas, also a professor of neuroscience and of biochemistry and molecular biophysics at Columbia’s Vagelos College of Physicians and Surgeons. “This system found a way to create a genetically encoded, hard-wired means of transforming randomly-chosen receptor identity to a very precise target in the olfactory bulb.”

He pointed out that neurodegenerative diseases, including Alzheimer’s and Parkinson’s, often involve olfactory deficits early in the disease process. This suggests that early detection of disruptions in the olfactory system’s high-precision wiring could become “clinically important,” he said.