For many physicians surveyed for a recent Medscape report, an important appeal of working for a health system or other medical employer is what they avoid: the headaches of running a small business. But sometimes, that perk plus stable income and job security can be overshadowed by lost autonomy, lack of income upside, and restrictive contracts.

Doctors surveyed for or commenting on Medscape’s “Employed Physicians Report: Loving the Focus, Hating the Bureaucracy” gave input on their salary, job satisfaction and security, attitudes toward their employer, career plans, and other key topics.

Several respondents gave their situation an exuberant thumbs-up. “My situation is pretty great,” a family medicine physician in Oklahoma said. Added a Wisconsin surgeon: “I like it much better compared to when I was in private practice. No overhead headaches.”

But far more often, respondents dove into their frustrations with working for a corporate employer.

For example, an emergency medicine physician in New Jersey described the biggest challenge as “hating my boss and the company I work for, being trapped and having nowhere to go, and having to put on a happy face and pretend I’m not miserable.” 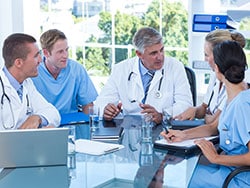 A Massachusetts surgeon’s complaints boiled down to simply “the onerous bureaucracy.” A New Jersey ob/gyn was more specific in lamenting “the compliance online workshops and the attempt to hold the clinical staff to benchmarks” like Press Ganey scores and target RVUs “without support for the clinical staff to achieve those benchmarks.”

Also frustrating: “The layers of administration and layers of people to go through to get things done,” a California psychiatrist said. In particular, respondents expressed annoyance with time spent on bureaucratic tasks they think comes at the expense of patient care.

A Minnesota pediatrician complained about “too much business mixed in with medicine.” And a North Carolina surgeon said his biggest challenge is “having to put up with all the corporate catchphrases and meaningless meetings and other things completely unrelated to patient care.”

When it comes to challenges facing employed physicians, relinquishing control can be overwhelming. It’s great to avoid the responsibilities of running a solo practice, but the feeling of complete loss of control can feel like a sharp over-correction.

In particular, employed physicians expressed displeasure with their lack of influence over hiring and their salaries and schedules. One critical care physician described “total, rigid control of your medical practice and personal life by administrative bureaucrats.”

Other physicians said you must consider what you gain in the trade-off vs self-employment. A palliative care doctor in Georgia conceded his frustration with the loss of autonomy, but “it definitely is made up for [by] security and the lack of stress.”

A Rhode Island psychiatrist who misses controlling small details also enjoys not having to “to sweat the contracts, billing, and other hassles of running my own business.”

“Leadership by the Uninformed”

Answering to inexperienced administrators was another common frustration expressed by employed physicians.

“Having to obey orders from a boss and colleagues who are less experienced” is the biggest challenge for one pathologist. “Having to follow the leadership by the uninformed” was how a Pennsylvania emergency medicine doctor described the situation.

An interventional cardiologist with both a solo practice and employee background commented that most doctors he has worked with “are smart, conscientious people. But the management personnel were all over the spectrum.”

“Administration only view us through the eyes of a spreadsheet,” an emergency medicine physician complained.

While Medscape reports found employed physicians’ contentment with their pay generally has increased since 2014, respondents and commenters this year were frustrated with stagnant or capped income, and lean or vague bonus potential under their employment contracts.

An Ohio physical medicine/rehabilitation doctor finds it hard to meet “seemingly unattainable bonus goals.” Other physicians reported their contracts let their employers cut benefits at will or are based on hard-to-decipher financial performance.

In fact, several physicians view income provisions in their contracts as disincentives.

“At this point, unless I have a side gig, there is a limit to my earning,” explained a North Carolina emergency pediatrician.

But some physicians said the burdens of their med school loans restrict options to pursue other jobs.

“I don’t want to be an employee, but I don’t have a choice,” said a California radiologist. “I can’t afford to start my own practice. I feel extremely trapped. If it weren’t for my massive student loan debt, I would change careers in a heartbeat.”

A plastic surgeon in Texas who has both employed and solo practice experience also commented on the influence of student loans.

“I really enjoy teaching my residents how to run their own practice, and I think most of them are heading that direction — including my doctor daughter. I find most of them work for 2 years with a group to pay off their hefty debt. If there is not a big non-compete clause in their contract, then they venture out on their own.”

But based on respondents’ comments, restrictive non-compete clauses are by far the biggest contract-related concern for employed physicians. Many pointed to 2- and 3-year non-competes within anywhere from a 5- to 70-mile radius.

“I would not be able to work anywhere else in the same city, since there are branch clinics evenly distributed over it,” a Texas pediatrician lamented.

Added a critical care physician from Minnesota: “Why should I be banned from working in an entire metro area if I decide to change jobs if there is no chance that I will bring patients with me?” And a Texas psychiatrist couldn’t “do any telepsychiatry for a year after leaving” their job. “That is crazy, and [I’m] not sure if it is enforceable.”

Several other physicians mentioned concerns about clauses requiring 3 to 6 months’ notice of their intent to terminate an employment contract, or else face penalties of $10,000 to $30,000 plus insurance costs. Another employed physician’s clawback clause would require returning the signing bonus if they leave before a certain date. A third doctor would have to pay the employer for all costs related to hiring a successor.

The good news? Some employed physicians remained hopeful in the face of so many challenges thanks in part to responsive employers. “I’m going to a place where there is transparency and equality in salary, as well as caps on patient load,” said an Alabama nephrologist who is switching jobs.