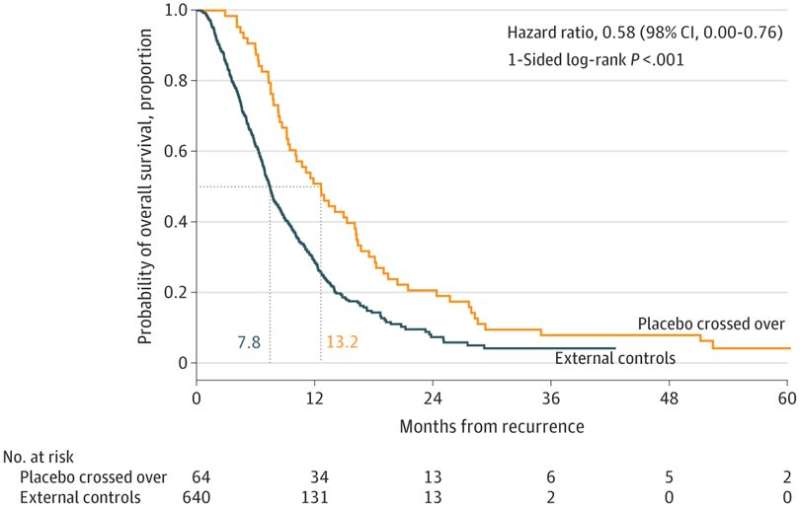 A vaccine (DCVax-L), trialed at King’s College Hospital and other centers around the world, using patients’ immune cells to target brain cancer can extend survival by many months or, in some cases, years, the final unblinded results from a phase 3 clinical trial has shown. The final results were published on Thursday, November 17 in JAMA Oncology.

The vaccine is created for each patient individually by isolating specific immune cells, known as dendritic cells, from their blood. These cells are then primed with biomarkers from a sample of the patient’s tumor. When the vaccine containing the cells is injected back into the patient, it shares that information so that the body’s entire immune system recognizes and attacks the target.

The vaccine was trialed for eight years, and involved more than 300 patients from the U.K., U.S., Canada and Germany—all of whom had been diagnosed with glioblastoma, the most aggressive form of brain tumor in adults.

Thirteen percent of patients treated with the vaccine survived at least five years from diagnosis compared to 5.7% in the control group, with the longest survivor surpassing eight years. Patients with methylated MGMT gene who were treated with the vaccine survived 30.2 months on average from randomization in the trial (33 months from surgery) compared to 21.3 months for the control group.

Unlike chemotherapy and radiotherapy, the vast majority of patients reported no side-effects from the immunotherapy vaccine. Only five of the 331 patients who took part reported any significant adverse effects, which may have been related to their treatment.

Professor Keyoumars Ashkan, Professor of Neurosurgery at King’s College Hospital, and European Chief Investigator of the clinical trial, said, “Immunotherapy is a very promising approach for treating cancer, and the final results of this phase 3 trial, now unblinded and published, offer fresh hope to patients battling with glioblastoma.

“The vaccine was shown to prolong life, and interestingly so in patients traditionally considered to have poorer prognosis. For example, we see clear benefits in the older patient groups as well as in those patients in whom radical surgery was not possible for technical or other reasons.

He added, “I am optimistic we can build upon this going forward; investigating combination of DCVax-L with other emerging therapies for glioblastomas. The long-term survivor group in particular has the potential to further teach us about the basic biology of glioblastomas, given that many patients in this group did not have the usual expected characteristics for good outcomes.

“Applying the same technology to develop treatments for other forms of brain tumors will be the natural next step,” Professor Ashkan remarked.

This form of immunotherapy uses the patient’s own immune system to fight cancer. The vaccine works by helping the immune system recognize and attack cancer cells.

All of the participants in the trial underwent the standard treatment for glioblastoma of surgery followed by radiotherapy and chemotherapy.

Two-thirds (232 patients) were then injected regularly with DCVax-L along with further chemotherapy (temozolomide). The remaining third were given a placebo—an indistinguishable and harmless substitute for the vaccine—along with temozolomide.

Neither the patients nor the clinicians involved knew which participants were being given the vaccine and which the placebo. However, every patient whose tumor recurred during the trial was automatically offered DCVax-L. This allowed DCVax-L to be also investigated in cases of recurrent glioblastoma. The final overall survival comparisons were made between the trial patients and 2,006 external control patients from contemporaneous comparator trials selected independently based on trial’s pre-approved statistical analysis plan.

King’s patient, Nigel French, 53, from Whitstable in Kent, was diagnosed with a glioblastoma in 2015 after suffering a nocturnal seizure. Having been referred to King’s for surgery, he was offered enrolment onto the DC Vax trial, to which he agreed. Seven years later, he is still in remission and is thankful to have had the opportunity to trial the vaccine.

Nigel said, “I’m very grateful to the team at King’s for offering me this lifeline. Although I can’t be certain as to whether I received DC Vax or the placebo, I believe the treatment I received, along with remaining positive, saved my life.”