Pfizer C.E.O. All but Rules Out Vaccine Before Election Day

After weeks of dangling the possibility of coronavirus vaccine results by October, Pfizer’s chief executive said on Tuesday that would now be nearly impossible.

The announcement, by Dr. Albert Bourla, came on the same day that Pfizer announced third-quarter earnings, and all but ruled out the possibility of early results before the presidential election next Tuesday. President Trump had long sought to tie the possibility of positive vaccine news to his own prospects for re-election.

In a call with investors on Tuesday, Wall Street analysts pushed Dr. Bourla to be more specific about when the company would have early results that could show the effectiveness of its vaccine, and how much detail the company would provide. Pfizer is one of four companies with large, late-stage clinical trials underway in the United States.

In his remarks, Dr. Bourla acknowledged the urgency of developing a vaccine amid a global resurgence in infections. In the United States over the past week, there have been an average of more than 71,000 coronavirus cases per day, and hospitalizations are increasing, too.

“Let’s be very patient — I know how much the stress levels are growing,” Dr. Bourla said. “I know how much the vaccine is needed for the world.” He also pushed back against any suggestion that politics were motivating the speed of development, saying “this is not a Republican vaccine, or a Democrat vaccine.”

Pfizer’s clinical trial is testing the vaccine in 44,000 people, half of whom will get a placebo. The trial’s protocol, or blueprint, allows for an initial look at results after at least 32 people in either the placebo or vaccinated group have developed Covid-19. If more than 26 of those people are in the placebo group, then the vaccine is considered likely to be effective.

Dr. Bourla had repeatedly predicted that the initial analysis — which is conducted by an outside board of scientific experts — would come by the end of October. But on Tuesday, he said those 32 cases of Covid-19 had not yet occurred, a sign that the trial is progressing more slowly than the company had estimated. He also said the outside panel would need at least a week to analyze any results, making an answer before the election unlikely. Dr. Bourla said the company would report results if the outside board found the vaccine was either effective or not, but not if there is no definitive conclusion either way.

Even if early results come over the next few weeks, most Americans are not likely to get the vaccine anytime soon. Under guidelines from the Food and Drug Administration, coronavirus vaccine developers must turn in at least two months of safety data after half of the trial’s participants have received the second dose of the vaccine, which Pfizer has said will not happen until at least the third week of November. 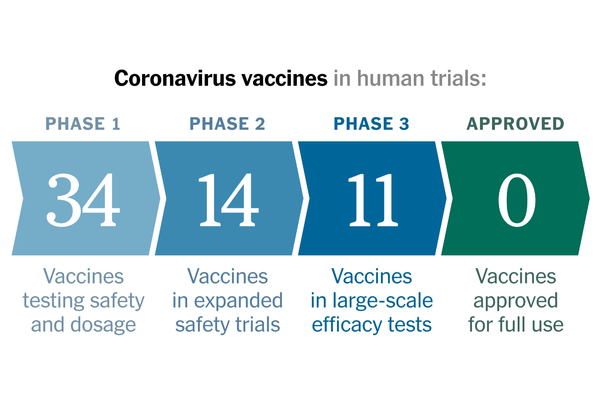