Due to the extensive usage of nanoparticles, toxicologists and scientists alike are interested in better understanding their safety profile. The toxic effects of nanoparticles on macrophages, for example, warrants further study, as these immune cells are often the first to encounter nanoparticles after they enter the body.

In a recent Life Sciences study, researchers discuss the molecular changes, as well as their underlying mechanisms, that arise in macrophages following their interaction with nanoparticles. 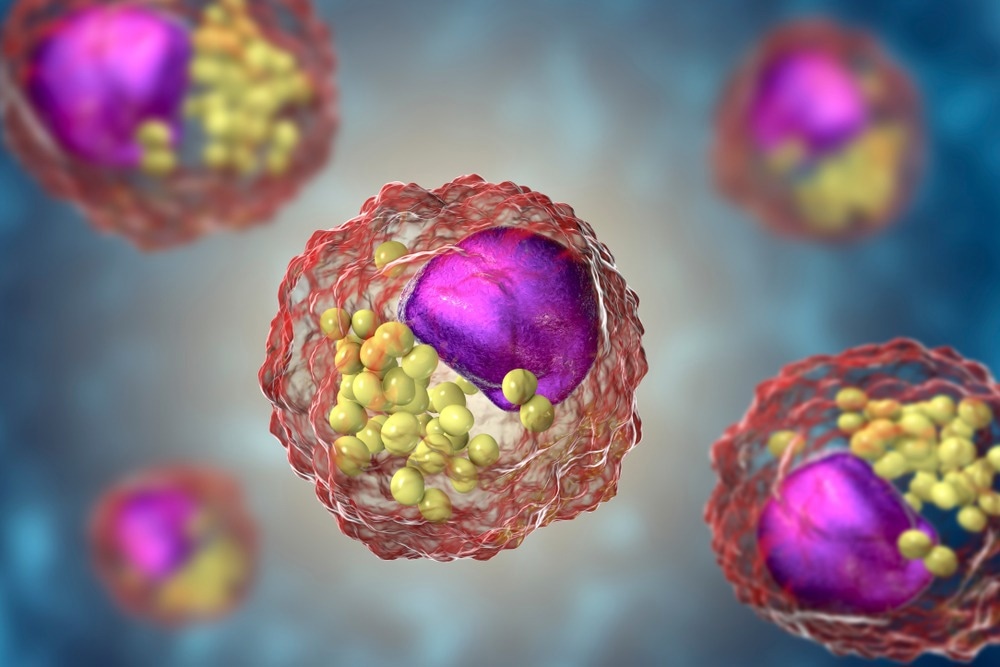 Nanoparticles can be both engineered or natural particles that are smaller than 100 nanometers (nm) in at least one dimension. Over the past several decades, nanotechnology has evolved rapidly, which has subsequently increased the demand for nanoparticles like titanium dioxide, zinc oxide (ZnO), graphene, and smaller quantum dots. These nanoparticles, which are widely used in many industries, including clothes, food, and cosmetics, have small sizes and excellent optical properties.

Multiple pathways exposure is the result of the widespread application of nanoparticles. Nanoparticles can enter the human body through dermal contact, inhalation, or ingestion, as well as an intravenous injection. Post deposition, nanoparticles can be absorbed and distributed throughout the body by epithelial cells, pulmonary macrophages, and various other cell types.

Once nanoparticles enter the body, they accumulate in their target organs, such as the spleen, liver, or kidneys, with possible distribution to the heart and brain. Recent studies have described the in vitro toxicity of most nanoparticles, which has increased the urgency in addressing the safety profiles of these particles.

Macrophages, which belong to both the immune and mononuclear phagocytic systems (MPS), are essential members of the immune response, as they phagocytize approximately 95% of invading nanoparticles. However, macrophages are susceptible to foreign nanoparticles and are, as a result, partly involved in the process of tissue injury.

Nanoparticles internalized by macrophages or targeting macrophages can induce cytotoxicity through the generation of functional damage and reduction of cell viability.

The physicochemical factors influencing the cytotoxicity of macrophages following nanoparticle exposure have also been assessed. To this end, the size, shape, charge, and surface properties of nanoparticles can affect their uptake and cell interactions.

Size is considered to be an important factor in nanoparticle uptake. Generally, the smaller the size, the greater the cytotoxicity.

Nanoparticle-mediated toxic effects arise in the form of genetic damage, oxidative stress, and inflammatory responses. Moreover, there are five key aspects related to cellular changes and interaction, which include internalization by macrophages, DNA damage, cell death, as well as production of reactive oxygen species (ROS) and cytokines.

Cell internalization is the process by which foreign particles are ingested into the cell. Thus, this process is affected by the physical and chemical properties of surface molecules. Invading nanoparticles are primarily ingested by macrophages through their phagocytic activity.

In the current study, researchers summarize the toxic effects of nanoparticles on macrophages in vitro and describe the cellular changes that arise following this interaction. Taken together, macrophage toxicity due to nanoparticles is mainly demonstrated through nanoparticle internalization, inflammatory responses, oxidative stress, cell death, and DNA damage.

In the future, researchers should investigate the non-classical toxicity mechanisms and further explore the in vivo macrophage toxicity of nanoparticles.

Priyom holds a Ph.D. in Plant Biology and Biotechnology from the University of Madras, India. She is an active researcher and an experienced science writer. Priyom has also co-authored several original research articles that have been published in reputed peer-reviewed journals. She is also an avid reader and an amateur photographer.