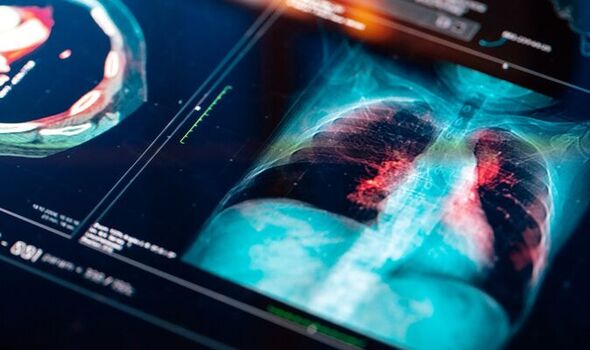 Referrals for the disease only returned to pre-pandemic levels in May – leaving a potential backlog. Cancer bosses say those with a cough for longer than three weeks, are coughing up blood or are persistently out of breath, must visit their GP immediately.

National Clinical Director for Can­cer Prof Peter Johnson said: “We’ve seen record numbers of people coming forward for tests and checks in the last year thanks to our campaigns and early diagnosis initiatives.

“But for lung cancer, we have not seen referrals bounce back at the same rate as other cancers.

“It is vital people stay alert against symptoms, so don’t ignore or assume it’s something else.

“Please visit your GP and get it checked out – it probably won’t be cancer but catching it early can help save lives.”

Lung cancer is one of the most serious types of the killer condition and was the fifth biggest cause of death in England last year, claiming the lives of 26,410 people. Each year 40,000 cases are diagnosed.

One in every four GP referrals is for suspected cancer – and the NHS says more than 5.3 million people were sent to specialists between June 2021 and May. Since Covid erupted in March 2020, 670,000 patients have started treatment.

Today – on World Lung Cancer Day – the NHS launches its Help Us Help You campaign to put the disease at the forefront of minds.

Cally Palmer, NHS England National Cancer Director said: “We know for a fact most people who get diagnosed with lung cancer early go on to survive.

“So it is imperative that people are aware of the symptoms and come forward as quickly as possible.”

Earlier this year a deal was struck to use immunotherapy drug atezolizumab, which helps reduce the chance of the death or the disease reappearing by a third.

The NHS also secured access to durvalumab, another immunotherapy drug which can help double the time patients survive an aggressive form of lung cancer. Mutation-bashing Mobocertinib will help hundreds of patients too.

Today’s push get people to see their GPs comes after Cancer Research UK demanded a blanket ban on smoking. That came as it emerged three in 20 cancer cases are caused by the habit.

In October ex Cabinet minister James Brokenshire died at 53 – four years after being diagnosed with lung cancer, although he never smoked.

His friend, Health Secretary Steve Barclay said: “The earlier you catch cancer, the better the chances of survival.”

What is happening where you live? Find out by adding your postcode or visit InYourArea