The health system, which is preparing to open a new laboratory that could process 100,000 tests a day, wants to take its program to public schools this fall. 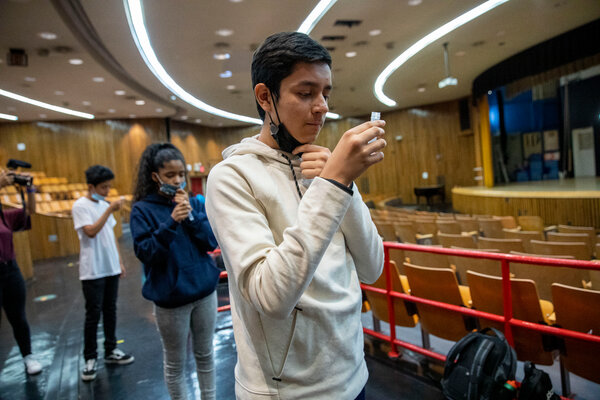 Every week, students at KIPP Infinity Middle School, in West Harlem, file into a large auditorium and take their places on the designated floor markings, making sure to stand six feet apart. Then they pull down their masks and fill sterile tubes with their spit.

The school’s teachers try to make the experience fun, running competitions to see who can fill their tube fastest and holding dance contests while students wait for their classmates to finish.

“It’s kind of enjoyable,” said Bradley Ramirez, a seventh grader at the school who likes math and Minecraft. “It’s way better than just sticking a stick up your nose.”

Bradley and his classmates are participants in a coronavirus testing pilot program created by the Mount Sinai Health System, the nonprofit Pershing Square Foundation and KIPP NYC, a network of 15 local charter schools. Since early March, the program has conducted more than 13,000 saliva-based tests of KIPP students, teachers and staff members, identifying several dozen cases of the virus.

Now Mount Sinai and Pershing Square are hoping to expand. On Tuesday they announced the Mount Sinai Covid Lab initiative, inviting additional charter schools, as well as local businesses and organizations, to sign up for the saliva-based testing program. They are putting the finishing touches on a new laboratory that they say will be capable of processing as many as 100,000 coronavirus tests a day and are preparing a formal proposal to take the program to New York City’s public schools this fall.

The announcement comes the day after Mayor Bill de Blasio said that the city planned to fully reopen schools, eliminating remote learning, in the fall.

The testing program originated in December, when Mr. Ackman decided that he wanted to find a way to get New York City children back to school and approached Mount Sinai with a proposal: What if he provided funding for the hospital to build a laboratory that could process 100,000 coronavirus tests a day? The hope was that the lab could devote some of that capacity to corporate clients, such as businesses that wanted to test their employees, and use the revenue to fund wide-scale testing for New York City schoolchildren.

Mount Sinai quickly agreed. “We began on a concerted effort that people at Mount Sinai have really rallied around,” said Dr. David Reich, president and chief operating officer of Mount Sinai Hospital. “It’s just one of those projects where you never have to worry about people wanting to show up for your Zoom meeting — they’re all there, and they’re all smiling.”

The Pershing Square Foundation, whose trustees are Mr. Ackman and his wife, Neri Oxman, agreed to provide $20 million, and Mount Sinai began to convert an old laboratory space at its downtown campus into a high-volume coronavirus test processing center. 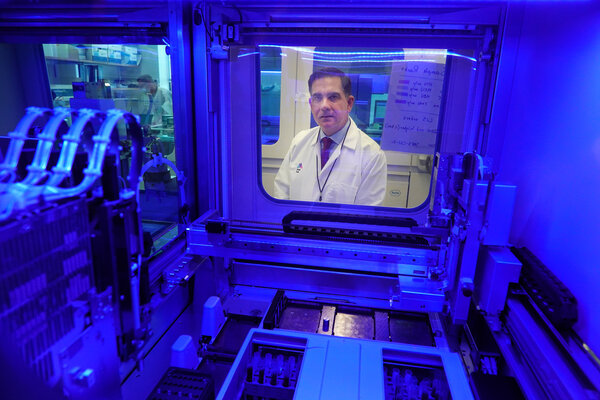 At the time, scientists at Mount Sinai’s Icahn School of Medicine were among a number of groups across the country that were working to develop saliva-based coronavirus tests. The gold standard diagnostic tests are known as P.C.R. tests, which can detect even minute amounts of the virus in biological specimens. During the early months of the pandemic, these tests generally required medical professionals to stick a swab deep into a patient’s nasopharynx, a procedure that can be deeply uncomfortable and put clinicians at risk.

Saliva-based P.C.R. tests, many scientists came to believe, would be safer and less invasive. They would also be much more suitable for young children than the deep, nasopharyngeal swabs. “A brain scoop, for a kid? Really? That’s a no-no,” said Dr. Alberto Paniz-Mondolfi, a pathologist at Mount Sinai who led development of the new saliva test.