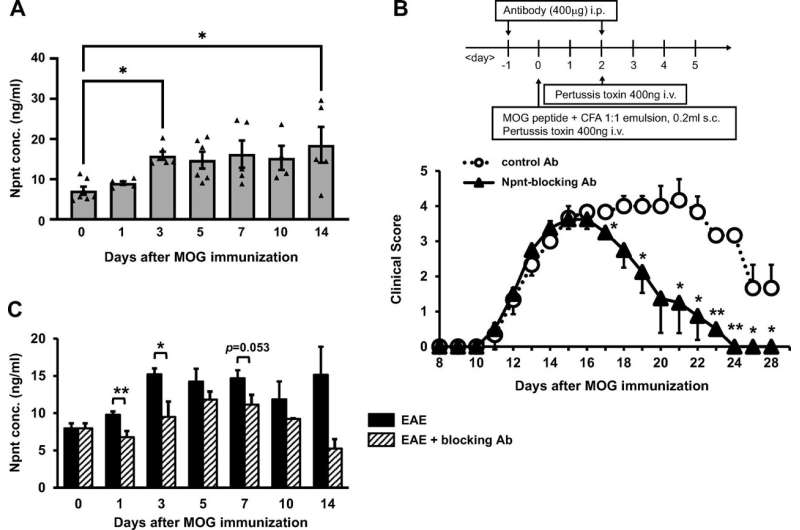 Approximately 23.5 million people in the U.S. have an autoimmune disease, and some studies suggest that number could be rising. New research using a mouse model for multiple sclerosis has uncovered a potential new area to explore for possible treatments for autoimmune disorders. The study is published ahead of print in the American Journal of Physiology-Cell Physiology.

Autoimmune diseases occur when the body’s immune system attacks its own healthy tissues, organs or cells. Treatments currently available for autoimmune diseases can come with serious side effects, such as an increased risk of contracting contagious diseases.

In earlier studies, researchers found that several mouse models of different autoimmune diseases had elevated levels of nephronectin. They also found that blocking nephronectin reduced inflammation in a mouse model of arthritis. Nephronectin is a protein known to be critical to kidney development but also appears in other parts of the body.

In the current study, the research team delved further into the connection between nephronectin and the immune system, identifying its role in a chain of cellular processes that stimulate an immune response. Finding therapeutics that disrupt these mechanisms could uncover novel treatment options for autoimmune diseases.

The researchers established that blocking nephronectin “significantly inhibited the development” of experimental autoimmune encephalitis—used as a model for multiple sclerosis—in mice. They then identified a number of proteins that bind to nephronectin. Among these was selenoprotein P, a glycoprotein that is known to stimulate the production of the antioxidant glutathione peroxidase 1.

Through further analysis, the researchers found evidence for a mechanism by which nephronectin influences the immune response. When nephronectin binds to selenoprotein P, it creates a feedback loop that alters the balance of signals to the immune system. This imbalance stimulates white blood cells to be more active than they should be. This activity then exacerbates the severity of EAE.