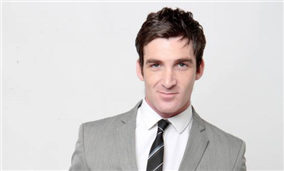 JOURNALIST Paul Martin has revealed that he has been given the all-clear after battling cancer.

The 41-year-old ‘Mr Showbiz’ journalist and father-of-four was diagnosed with Hodgkin lymphoma earlier this year and fought a six-month battle with the disease.

Writing in the Belfast Telegraph at the time of his diagnosis, Mr Martin shared his fears for his life and his worry that his children would be left to grow up without a father.

After receiving the all-clear Paul has bounced back and proclaimed he’s going to be bigger and better than ever, issuing a warning to celebrities that he’ll be out to “create more carnage”.

However, behind his trademark bravado he admitted that his cancer journey has taught him a lot about himself and given him a new found appreciation for life.

He paid tribute to the staff and at Belfast City Hospital’s Bridgewater Suite and charity Macmillan for the care and support he received throughout his illness.

The entertainment correspondent has even committed to running next year’s Belfast City Marathon in aid of McMillan and is back in the gym in preparation.

Prior to receiving his diagnosis Mr Martin admitted he was in a “dark place” in his life, even contemplating suicide.

He said that he believed 20 years of hard partying had finally caught up with him and played a part in his diagnosis.

“I partied too much and got very clinically depressed, I can tell you what the lips of depression feel like,” Paul said.

Paul said that he felt “God was punishing” him for the type of life he was living.

“I went from contemplating suicide to wanting to live really badly, it’s different when something might take your life from you.

“I created this high profile, when I was 25 I wanted to be the biggest and best known journalist, but as you get older you realise that it’s all really vacuous b*******. It was all a front.

“I really didn’t cope with being well-known as well as I thought I would. I did lots of reality TV and people would come up asking for photos and then others would come up to have a go.”

As part of his cancer treatment Paul was given a “cocktail of drugs” and had to go through 20 radiotherapy sessions at the City Hospital.

He said that the people he met through his treatment had a huge impact on him.

“They put you in this big machine and there’s no sound, no smell – nothing. Then they zap you. I was lucky that my tumour quickly shrunk from 4cm to 1cm.

“I would be sitting in the waiting room and on the right of me would be a girl with six months to live and on the left a girl with three months, and they’d be smiling and talking about anything else.

“Showbiz means f*** all next to that. I sat there thinking I need to have a really good look at myself.”

Paul explained that he saw his cancer battle as “tumultuous carnage”. “Even the recovery was tough, cancer throws everything at you so to defy the odds is amazing,” he said.

“I love travelling but I’ve been scared to book a holiday because I’ve been dreading a doctor telling me that I’m going to die.”

Paul described the moment he told his children the good news.

“It’s a monumental relief, not just for myself, more for the kids, it’s hard to have that hanging over for you six months,” he said.

“When you’re diagnosed with stage four cancer, well there is no stage five, so to receive the all-clear is unexpected, it feels like a miracle.

“My 14-year-old son James went absolutely mad when I told him the news, Sonny who’s eight did the ‘floss’ dance. My 11-year-old princess Isabelle just broke down in tears. It was a beautiful, beautiful experience.

“I was just thrilled for them, I didn’t care about my own life at the start of this battle but I do now.”

He said that he had come out the other side with a desire to be a better person.

“I’m going to do the marathon next year to give something back, Macmillan were there for me every step of the way throughout my journey.”