#ImAtWorkLeo: Doctors and nurses use social media to remind Taoiseach they're working non-stop over Christmas 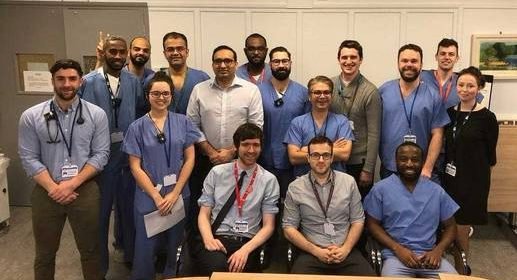 The Taoiseach caused controversy last month when he suggested that healthcare workers should not take holidays during the first two weeks of January in a bid to solve A&E overcrowding.

Mr Varadkar was challenged at the time to publicly apologise to hospital workers for saying emergency department problems are caused because they don’t “turn up” for work over the Christmas period.

Mr Varadkar faced a wall of criticism from all political parties for his remarks about the causes of over-crowding, queues, and reliance on trolleys, at hospital emergency departments.

The Taoiseach told the Dáil it was time the hospitals operated “at full whack” over the upcoming Christmas holiday period, December 22 to January 3 next.

He also warned that consultants and nurses must not take holidays in the first fortnight in January.

Fianna Fail frontbench spokesperson Billy Kelleher described the Taoiseach’s comments as “flippant and insensitive” to health service workers “who go above and beyond the call of duty every Christmas”.

“If I was cynical, I’d wonder whether the Taoiseach actually made these flippant remarks in an effort to distract from his admission that he and his government have no ideas on how to deal with ED overcrowding.

“Instead of trying to scapegoat our health workers, the Taoiseach, his Minister for Health and HSE senior management need to look at themselves and what they have, and have not delivered,” Mr Kelleher said.

Earlier, Mr Varadkar directly called on the HSE not to sanction additional holidays for doctors and nurses over Christmas.

As hundreds of thousands enjoy their Christmas holidays, healthcare professionals have taken to Twitter to vent their frustration using the hashtags #WeAreWorking and #ImAtWorkLeo.

Journalist Graham Clifford posted an image of his wife, writing; “So here’s my wife Catherine -a local GP who is working today as well as most of the Christmas and New Year.

“We have 4 young children, the smallest just 1-year-old who won’t see much of her. But she gets on with it, working hard and doing her best like so many others.”

One healthcare worker wrote; “Three 24 hour shifts in 6 days and 2 in the last three. It cool if I take a day or two off to celebrate Christmas with my fam @campaignforleo?”

Another penned a poem to the tune of ‘Fairytale of New York’; “It’s Christmas Eve babe,

in the hospital, a young woman’s blood pressure, sure I’ll take another one, and then I ran along…

“To the lab with bloods a few, I turned my face away, And thought of all the work still to do.”

“We’ll be taking emergency calls from all over the country 24/7 over the Christmas period, just like the rest of the year.”

They also warned; “Make sure a new helmet comes with the new bike!”

In the west, healthcare workers wrote; “Greetings from Sligo radiology department. Wishing all my colleague working here in Sligo and across the HSE a peaceful Christmas and New year.”

However, there was some support for Mr Varadkar on social media – from a physician, and his fellow colleagues, attending Cork University Hospital.

Dr Adrian Murphy thanked the Taoiseach for visiting the hospital’s emergency department on Christmas Day “and acknowledging the sacrifices of all frontline [HSE staff] during the Christmas holidays.”