How nerve and vascular cells coordinate their growth 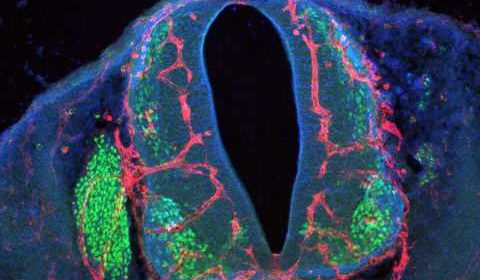 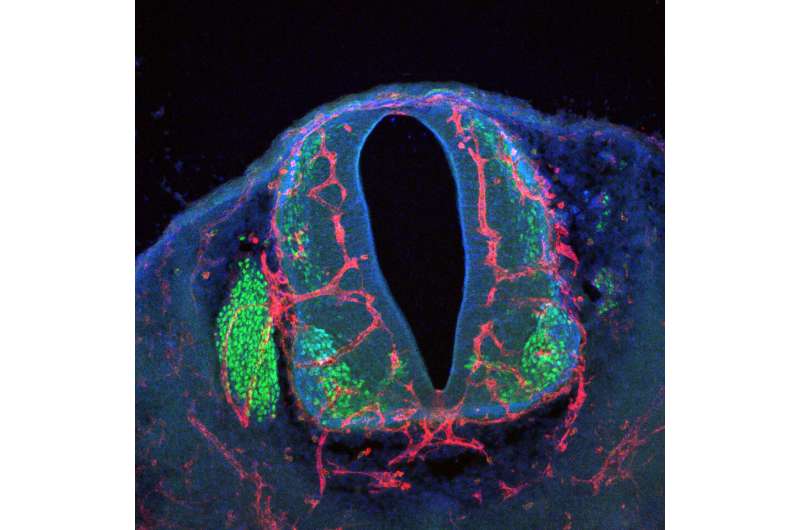 Nerve cells need a lot of energy and oxygen. They receive both through the blood. This is why nerve tissue is usually crisscrossed by a large number of blood vessels. But what prevents neurons and vascular cells from getting in each other’s way as they grow? Researchers at the Universities of Heidelberg and Bonn, together with international partners, have identified a mechanism that takes care of this. The results have now appeared in the journal Neuron.

Nerve cells are extremely hungry. About one in five calories that we consume through food goes to our brain. This is because generating voltage pulses (the action potentials) and transmitting them between neurons is very energy-intensive. For this reason, nerve tissue is usually crisscrossed by numerous blood vessels. They ensure a supply of nutrients and oxygen.

During embryonic development, a large number of vessels sprout in the brain and spinal cord, but also in the retina of the eye. Additionally, masses of neurons are formed there, which network with each other and with structures such as muscles and organs. Both processes have to be considerate of each other so as not to get in each other’s way.

“We have identified a new mechanism that ensures this,” explains Prof. Dr. Carmen Ruiz de Almodóvar, member of the Cluster of Excellence ImmunoSensation2 and the Transdisciplinary Research Area Life & Health at the University of Bonn.

The researcher moved to the Institute of Neurovascular Cell Biology at the University Hospital Bonn in early 2022. Since this spring, she has held one of the special established Schlegel Professorships, with which the university aims to attract outstanding researchers to Bonn.

However, most of the research was still done at her old place of work, the European Center for Angioscience at the Medical Faculty Mannheim, which is part of the University of Heidelberg. The work was then completed at the University of Bonn. In her study, she and international partners took a close look at the formation of blood vessels in the spinal cord of mice.

Growth pause in the spine

“The appearance of blood vessels in the spinal cord begins in the animals about 8.5 days after fertilization,” she says.

“Between days 10.5 and 12.5, however, blood vessels do not grow in all directions. This is despite the fact that large amounts of growth-promoting molecules are present in their environment during this time. Instead, during this time, numerous nerve cells—the motor neurons—migrate from their place of origin in the spinal cord to their final position. There, they then form extensions called axons that lead from the spine to the various targeting muscles.”

This means that the motor neurons self-organize and grow at the time that blood vessels do not grow towards them. Only then after, do the vessels begin to sprout again. “The whole thing resembles a carefully choreographed dance,” explains José Ricardo Vieira. The doctoral student in Ruiz de Almodóvar’s research group did much of the work in the study. “In the course of this, each partner takes care not to get in the other’s way.”

But how is this dance coordinated? Apparently, by the motor neurons shouting a “stop, now it’s my turn” message to the vascular cells. To do this, they use a protein that they release into their environment—semaphorin 3C (Sema3C). It diffuses to the vascular cells and docks there at a receptor called PlexinD1—in a sense, this is the ear for which the molecular message is intended. 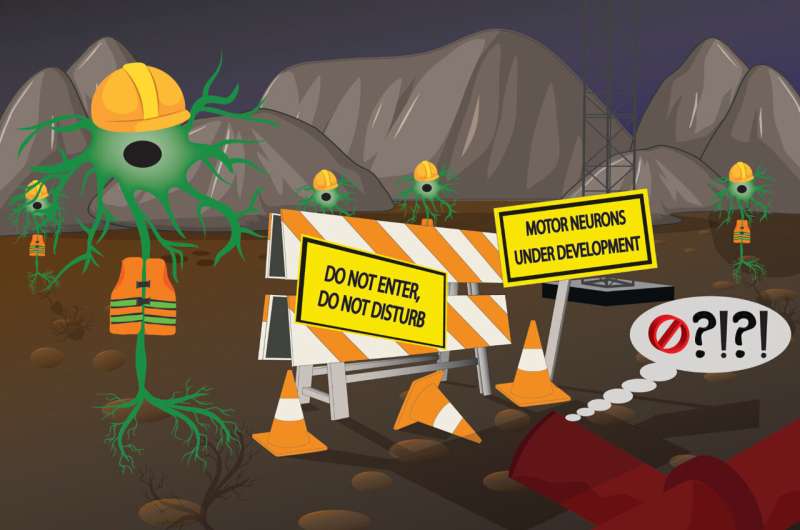 “When we stop the production of Sema3C in neurons in mice, blood vessels form prematurely in the region where these neurons are located,” explains Prof. Ruiz de Almodóvar. “This prevents the axons of the neurons from developing properly—they are prevented from doing so by the vessels.” The researchers achieved a similar effect when they experimentally stopped the formation of PlexinD1 in the vascular cells: Since these were now deaf to the Sema3C signal from the neurons, they did not stop growing but continued to sprout.

The results document the importance of coordinated operation of the two processes during embryonic development. These findings could also contribute to a better understanding of certain diseases, such as retinal defects caused by strong and uncontrolled vessel growth. The use of the newly discovered mechanism may also potentially help in regenerating destroyed brain areas, for example after a spinal cord injury, in the long term.