How does life cycle management strategy affect the commercial success of a drug? 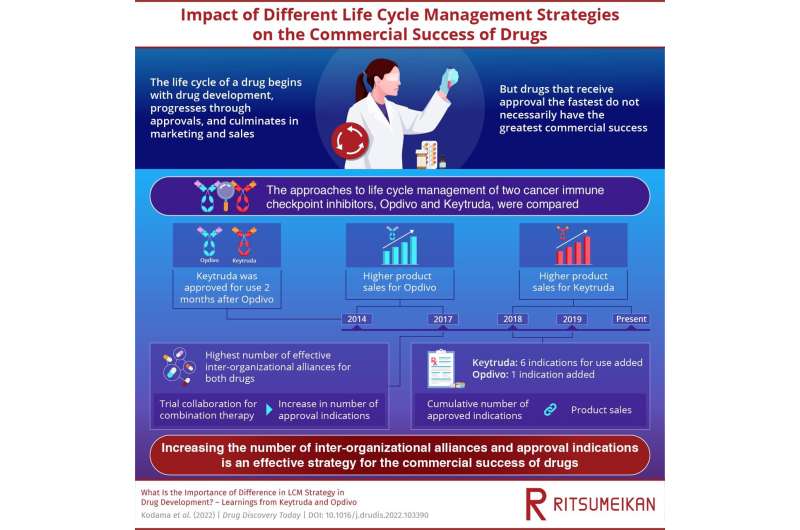 The rapid growth and expansion of the pharmaceutical industry has changed how we treat and prevent diseases. But there are still many intractable conditions. Research and development (R&D) in these areas is thus critical, requiring high investment despite the low odds of success. Findings ways to improve R&D and ensure the commercial success of a drug are a key area of research in the pharmaceutical industry.

Recently, a team of researchers, including Prof. Kota Kodama from Ritsumeikan University, have compared the performance of two game-changing anticancer drugs, Opdivo and Keytruda, to pinpoint the major strategic contributors to a drug’s commercial success. The article has been published in Drug Discovery Today. This paper was made available online on October 9, 2022 and will be published in Volume 27 Issue 12 of the journal in December 2022.

The life cycle of a drug begins with drug discovery and development, which includes lab experiments and clinical trials. This is followed by approval by various governmental agencies that vouch for its safety and efficacy, marketing and sales, and finally post-sales research to ensure the ongoing safety of the drug. Generally, drugs that are the first to market gain a huge advantage in terms of sales. This is true for drugs with the that have the highest efficacy and least side effects as well.

Opdivo and Keytruda are two immune checkpoint inhibitors, drugs that constitute a new approach to immunotherapy for the treatment of cancer. The two have roughly the same efficacy and safety, but Opdivo received approval a few months before Keytruda. Opdivo, in particular, is the first immune checkpoint inhibitor to hit the market. From 2014 to 2018, Opdivo outsold Keytruda. But this changed in 2018, when Keytruda took the lead. “The sales of Keytruda are approximately doubly those of Opdivo. Despite the fact that Opdivo has won in science (by being first to market), Keytruda is still winning in business (only in sales, not profits),” says Prof. Kodama.

The research team examined the life cycle management strategies for the two drugs, by focusing on product sales, interorganizational deals, and approved indications. They found that product sales are closely linked to the number of approved indications, i.e., diseases for which the drug can be used as a treatment. They also found that Keytruda had a significantly higher number of effective inter-organizational alliances, i.e., inter-organizational deals that had a direct influence on the development of the drug. For both drugs these alliances were primarily with biotech companies and startups.

Moreover, both drugs had more inter-organizational alliances for combination therapy—for example, the use of two immunotherapy drugs together, or the use of an immunotherapy drug in combination with chemotherapy drugs, a standard approach in the treatment of cancer—than for any other purpose. During development, Keytruda was primarily combined with drugs in phase 1 or phase 2 of clinical trials, whereas Opdivo was combined with a wider range of drugs.

“Per our understanding, the remarkable growth in product sales for Keytruda can be attributed to their R&D strategy. The strategy centered on trial collaboration based on the mechanism of action of the drug—which is very different for immune checkpoint modulators than for other drugs—and led to active inter-organizational collaboration for the development of immune checkpoint inhibitors,” explains Prof. Kodama. Keytruda also has more approved indications for use in combination with chemotherapy than Opdivo.

Another key difference between the two drugs is in their licensing. Keytruda is licensed to a single company Merck, whereas Opdivo is licensed by two companies, Ono Pharmaceuticals and Bristol Myers Squibb. Having only one licensee could make it easier for Keytruda to generate profit, however the data on this is limited, thereby making it difficult to draw firm conclusions.

Overall, the findings highlight the link between increased trial collaboration for the development of combination therapy, increased approval indications, and higher sales. “The knowledge of natural science is very important in the development of pharmaceuticals, but the knowledge of social science, such as business strategies for life cycle management, is key to success as well. Japan lags behind in the knowledge of the latter. Through our research, we wish to create a kind of environment where Japanese companies can also thrive in business,” concludes Prof. Kodama.