Give newborn to mom right away—after moving the electrodes 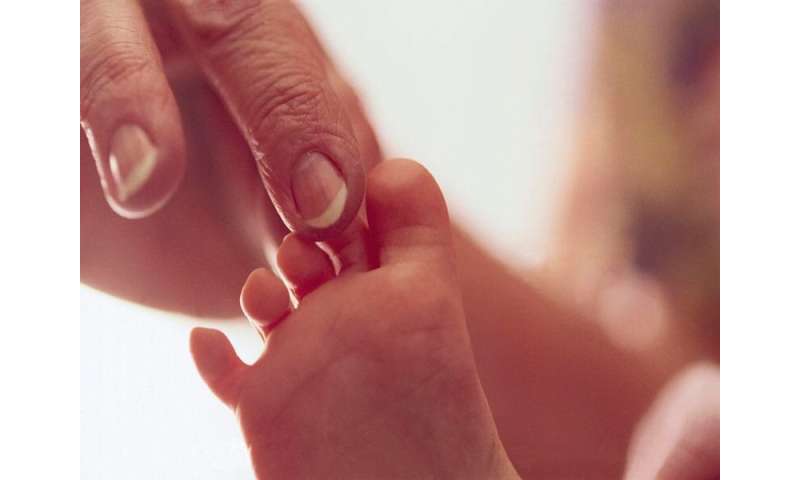 (HealthDay)—Immediate skin-to-skin contact between newborns and their mothers is encouraged, but poses some potential risks in cases of cesarean birth, researchers say.

In a new report, the researchers described two cases where newly delivered babies came into contact with electrodes on the mothers’ skin that were used to monitor her vital signs during C-section surgery.

The cases were reported in the December issue of the European Journal of Anaesthesiology.

One case involved a 37-year-old woman in Spain who required C-section delivery because her baby’s head was too large to fit through her pelvis. The healthy baby boy was delivered with no major bleeding and, after an initial examination, was placed on his mother’s chest.

“Shortly after this, the heart rate alarm was triggered on the monitor, due to an apparent dramatic increase of the mother’s heart rate,” report co-author Dr. Nicolas Brogly said in a journal news release.

“However, the woman remained conscious and with no complaint,” and her heart, blood pressure and other vital signs were normal, said Brogly of La Zarzuela University Hospital and La Paz Hospital in Madrid.

Doctors checked the electrocardiographic (ECG) electrodes attached to the mother.

“The newborn was found suckling the right electrode of the ECG, which was immediately replaced to another site on the mother’s skin,” Brogly said. “The abnormal ECG rhythm, which was in fact a combination of the mother and the baby’s ECG, then disappeared.”

The second case involved a 36-year-old woman in the Netherlands who had a C-section because her baby boy’s head did not descend. After birth, the newborn was placed on the woman’s chest. Soon after, the woman’s ECG showed an abnormally fast heart rhythm.

“A quick inspection of the baby showed that he had taken the right ECG lead in his hand. After carefully moving this lead to the mother’s right shoulder, the ECG returned to normal,” said Dr. Leonie Slegers, of St. Antonius Hospital, in Woerden.

Both cases show that through the baby suckling or touching an ECG electrode, the cardiac electric activity of the baby can merge with the mother’s, Brogly said. “This novel source of electric interference represents a risk for both the mother and the baby,” he added.