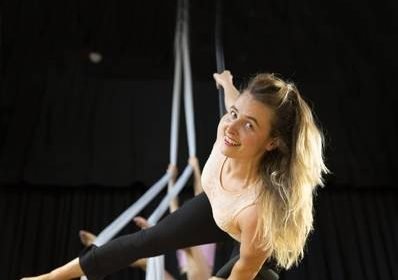 It’s a new dawn, it’s a new day, or at the very least it’s a new year, and to paraphrase Nina Simone you too can feel good if you make this the year you look after your physical health. We investigate the fitness trends to help imbue the January blues with an endorphin-laced buzz. Rebounding – a cardiovascular work out on a trampoline has been described by NASA as being “the most efficient and effective exercise yet devised by man” and has found love with celebs as diverse as Ronald Reagan and pop’s reigning queen mother Madonna.

If you kept the pounds off by letting loose on the dance floor in your youth, then Boogie Bounce is the workout for you.

“Essentially, it’s bouncing on a mini-trampoline for 50-minutes to thumping tunes, while the instructor orders you to squat, swivel, lunge and clinch,” says Emma Weafer of Boogie Bounce Dublin.

It works your bum, tum and thighs, developing both upper and lower body strength as effectively as weightlifting. Ten minutes of bouncing is as effective as 30 minutes of jogging.

“It’s suitable for all ages, sizes and fitness levels and it’s extremely effective for natural weight loss/inch loss. You lose up to 800 calories per class. And it’s also fabulous for cellulite reduction, as it allows your lymphatic system to be more productive.”

Adults lose between five to seven pounds of muscle every decade after the age of 20 and only strength training prevents muscle loss. Also performed on a trampoline, this class is less about the disco lights and driving EDM of Boogie Bounce and more focused on building muscle while stripping fat.

Rather than jumping on the trampoline, this work out uses it more for resistance than cardio training, as you use bands to work against the trampoline to slowly engage each muscle group, moving each body part separately.

It strengthens joints and gives the body the ability to maintain correct posture and alignment, improves flexibility and balance and increases muscle to fat ratio. Should you want to take your rebounding out of the studio and into the open, Kangoo shoes are the way to go. Referred to as ‘a gym in a bag’ these special boots were developed for joggers to reduce the impact on joints and it’s effectively like replacing the sole of your shoe with a trampoline. They can be used for any activity on any sneaker-friendly surface for running and satisfy all requirements for a full body workout.

“The shoes absorb 80pc of the shock while you’re running, making it a perfect activity for those overcoming an injury or wanting to cross-train to give their joints a break from the usual wear and tear of the sport,” says Jetkaterina Makarova of Kangoo Jumps Ireland. “You also burn 25 to 50pc more calories than cardio in regular sneakers because you’re fighting gravity and using your core to stabilise as you rebound off the ground.

“Plus, it’s a great way to improve your endurance. It’s difficult to run at your normal speed in Kangoo Jumps, and since you’re rebounding off the ground you are able to work out longer and at a higher intensity than normal thanks to the slight resistance the shoes provide.”

While Nancy Sinatra’s boots were made for walking, Bonnie Beaux’s heels were made for dancing. Her weekly classes in Waterford and regular workshops in Dublin teach both men and women the techniques they need to dance comfortably in high heels.

“The tagline for my class is ‘dance yourself free’ and I find a lot of the people who come to me might be blocked by a fear of being sexy as it’s frowned upon, almost as if you are looking for attention. So I do a lot of hip work, really grounding work to help people own themselves, to feel free and sexy.”

It has multiple health benefits.

“One of the main moves in the class is the slut drop – I actually bless the start of each class with one, and that is basically a squat, so you get a great booty.

“Planks can be scary and time-consuming but in killer heels, we use our body weight to dance on the floor which is essentially a dancing plank, while body rolls use your entire core to make a ripple wave effect which I find is a fun alternative to sit-ups.

“Dancing in heels, in general, engages calf muscles and gives the added bonus of making legs appear longer and leaner.”

GET UP THE POLE

While pole dancing has long been utilised as a form of exercise by women, it has found increasing popularity with men in recent years, as more people look to callisthenics to get fit. Michael Donohoe, a pole-dancing instructor with Fierce Fitness has done it for seven years.

“It’s not just dancing around a pole, which I think a lot of people thought it was. Pole dancing can help you get a lot more muscle built up, more strength and power in the body and it can help your back become stronger. It gives your quads and glutes more tone and put more power in your arms and calves.”

“When you start you are learning basic lifts and spins, so you can wear whatever you would wear to any other gym class as you just need hand contact on the pole.

“When you first undertake an exercise programme you will notice your strength go up rapidly, after four to five weeks. After a term, you will notice muscles you never saw before. Your body reacts that quickly to it.”

Fencing is built on the coordination of actions. As you attack, counter-attack, parry and riposte, you move your body in a multitude of ways. While there are many common positions adopted during the course of a fight, many more will be purely reactive, which helps develop good coordination, split-second thinking and observation.

“You don’t have to be particularly fit starting off,” says David Couper, maitre of the Dublin Fencing Club Salle. “But the more regularly you train the more supple you become because of the lunging involved in attacking movements. It stretches the tendons in your hips and thighs, your leg strength increases, particularly your calf muscles, from all the sudden movements while your breathing ability also improves.”

Indoor climbing engages your whole body to navigate your way around a preset route, a pattern of movement using your hands, feet, core and hips to get from one point to another.

“A wide range of motion is being called on at some point or other,” says Dave Ayton, managing director of Awesome Walls Climbing Centres Ireland. “You are moving your four limbs, developing a strong core as the extreme reaches and steps are centred through it, thus strengthening your entire body.

People who maybe want a break from Pilates, yoga or mixed martial arts find climbing quite similar, in that it’s a whole body movement, that uses body weight as resistance, and that forces the body to become flexible to engage with the challenges it presents.

“One nice physical change is in posture. A lot of us these days have shortened hip flexors and some form of pelvic tilt as a result of being stumped over computers all day. Well, climbing activates your core and back muscles.”

It’s also a sport that women excel at over men, as men have a tendency to rely on strength. “Strength is finite and will run out. Simply relying on pulling your way up a wall with your upper body musculature is very inefficient especially when you consider the untapped resources available in a person’s lower body and core. It would be like a bad driver in a supercharged F1 car trying to compete against Ayrton Senna by simply keeping their foot down. It’s a combination of the subtle movement techniques that lead to efficient climbing that allow someone to maximise the yield from their strength.”

GET YOUR HOOP ON While you might wonder how an activity you enjoyed as a child could possibly help you as an adult, Sarah Breen of Get Your Hoop On says that the hoops used by children and those used by adults are very different beasts. “People think hoops, they think of the ones you used on the playground as a kid, that came from the pound store – plastic flimsy things that might have rattling stuff in them. Adult hoops are bigger in diameter (36-38 inches), made of more solid plastic and are not as bouncy around your waist. They are also weighted.”

As an exercise, it uses the whole body, burning up to 450 calories for every hour spent hooping. It strengthens muscles, works your abs and core and makes you more flexible.

Just because it looks easy doesn’t mean it is. “Finding the basic rhythm and the correct speed can take a while, as people don’t realise how quickly they have to move their hips. If you slow down at all the hoop just drops. But as soon as you find it, people are flying and it’s great craic. It really lifts your mood, to be around people learning a routine together, helping each other out. I’ve had a lot of people come on their own and their confidence has just shot up doing the class.” Breen emphasises that she teaches a routine, rather than tricks singular. “It’s like a performance, not just an exercise. Learning tricks is great, but then it’s a lot of stopping and starting. I help them piece it together so that by the end of it you have a routine that lasts a minute or two and you can really show off what you learned in a more impressive way.”

DANCING IN THE AIR

In aerial, students are taught skills such as inverting, creating locks, holds and knots in the equipment, using ropes, hoops and trapeze, which draw on personal style and technical expertise to create an aerial dance. It combines elements of Pilates and ground-based acrobatic movement, and most basic beginners courses will help strengthen, lengthen and lighten the physical body while developing motor skills, coordination and proprioception for broader capacity of movement.

“It requires and builds huge whole body strength,” says Katie Holmes of Creation Aerial, “in particular the upper body and core. It develops balance and proprioception of the body not only in space but upside down and tied up.

“We develop creative, intelligent embodied movement on the equipment building strength and flexibility. And it also requires group work and a sense of imagination and grit. Although it can seem impossible and difficult to begin, students quickly achieve things they did not think they’d be able to.”

While Miley Cyrus blew twerking up in a way that made many who tried look foolish, it’s important to remember that it is a form of African dance with a rich history and many different techniques depending on the country and culture it derived from. There are many Afrobeat/ twerk classes in Go Dance Ireland on Instagram while Bonnie Boux teaches weekly classes in Waterford and workshops in Dublin.

“It’s essentially using your bum to dance. There are many techniques that will use different muscles from your backside to your legs to your lower back to create pops, whines, shakes and claps.

“The most basic twerk movement sees you squat down, putting your body weight on to your knees, tilting your pelvis up towards the ceiling, then tilting it up and down, using legs, thighs and lower back. There’s a lot of muscle toning, a lot of cardio and a lot of conditioning.”