Dr. Barbara Murphy, a leading nephrologist who specialized in advanced research that focused on predicting and diagnosing the outcomes of kidney transplants, died on Wednesday at Mount Sinai Hospital in Manhattan, where she had worked since 1997. She was 56.

The cause was glioblastoma, an aggressive form of brain cancer, her husband, Peter Fogarty, said.

“In baseball, they talk about five-tool players,” Dr. Dennis S. Charney, dean of the Icahn School, said by phone. “I don’t know how many tools she had, but she was a very strong administrator, a great researcher and a great mentor to many people.”

Dr. Murphy, who was from Ireland, developed her interest in kidney transplantation while attending medical school at the Royal College of Surgeons in Dublin. She was drawn especially to how it transformed patients’ lives.

“I love seeing how well patients do afterward,” she told Irish America magazine in 2016. “For all the years that I’ve been in this profession, the interaction between a living donor and a recipient in the recovery room still makes me proud to be a physician and to play a part in such a life-affirming moment.”

After being recruited to Mount Sinai in 1997, she joined other researchers in examining the role of H.I.V. in kidney disease and helped establish the viability of kidney transplants for patients with H.I.V. In a speech at the Royal College in 2018, she recalled that there had been criticism of such transplants — as if there were a “moral hierarchy when it came to donor kidneys.”

She added, “Two weeks ago, we received an email from one of our patients, thanking us on his 15th renal transplant birthday.”

More recently, Dr. Murphy’s research at her laboratory at Mount Sinai focused on the genetics and genomics of predicting the results of transplants, and on why some kidneys are rejected.

In findings reported in The Lancet in 2016, she and her collaborators said they had identified a set of 13 genes that predicted which patients would subsequently develop fibrosis, a hallmark of chronic kidney disease, and, ultimately, irreversible damage to the transplanted organ. Being able to predict which patients were at risk, they wrote, would allow for treatment to prevent fibrosis.

Her research has been licensed to two companies. One, Verici DX, which is still in validation trials in advance of commercial sales, is developing RNA signature tests to determine how a patient is responding to, and will respond to, a transplant. The other company, Renalytix, uses an algorithm guided by artificial intelligence to identify a kidney disease risk score for patients. Dr. Murphy served on the boards of both companies.

“Barbara was foundational to Verici,” Sara Barrington, the company’s chief executive, said by phone. She added, “Her lab will continue to file new discoveries out of her base research.” 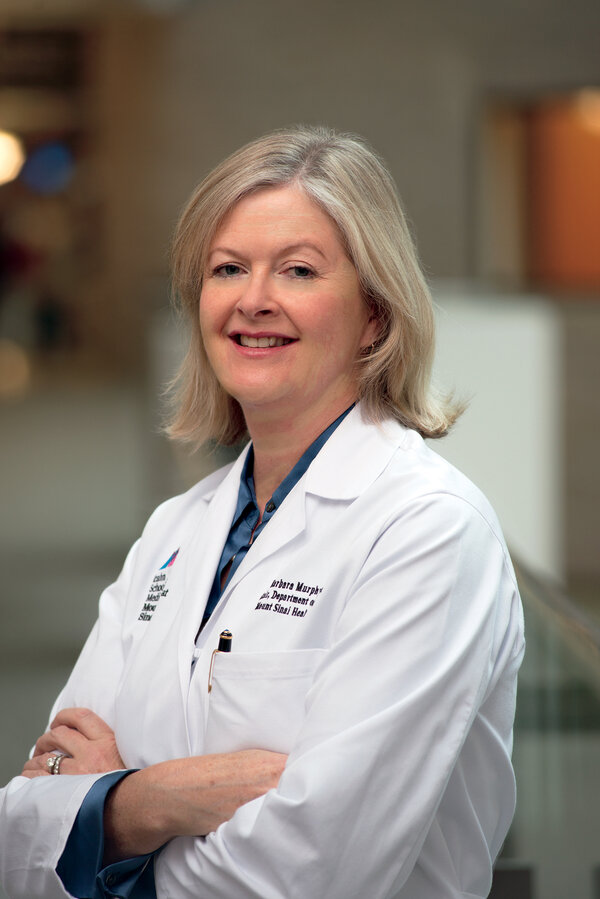 Barbara Therese Murphy was born on Oct. 15, 1964, in South Dublin. Her father, John, owned an airfreight company, and her mother, Anne (Duffy) Murphy, worked with him and also designed bridal wear.

At age 4, Dr. Murphy recalled in a speech at a health care awards dinner sponsored by Irish America in 2016, she had to overcome a harsh judgment by a teacher.

“My elementary school teacher told my mother I was a dunce and I would never be anything, and what’s more she shouldn’t even try,” she said. “Fortunately, my parents persevered.”

After earning her medical degree at the Royal College in 1989, Dr. Murphy completed her residency and a nephrology fellowship at Beaumont Hospital, also in Dublin. She was also a nephrology fellow in the renal division of Brigham and Women’s Hospital in Boston, where she trained in transplant immunology.

In 1997, she was recruited to Mount Sinai as director of transplant nephrology by Dr. Paul Klotman, then the chief of the division of nephrology, who promoted her to his former position in 2003 after he had become chairman of Icahn’s department of medicine.

“She showed a lot of promise in transplant nephrology, which was emerging at the time,” Dr. Klotman, now the president of the Baylor College of Medicine in Houston, said by phone. “Over the years, she developed good leadership skills: She was very organized and task oriented.”

In the spring of 2020, Dr. Murphy, like other physicians, noticed with alarm that Covid-19 was much more than a respiratory disease. It was causing a surge in kidney failure that led to shortages of machines, supplies and personnel needed for emergency dialysis.

One of Mount Sinai’s responses to the pandemic that May was to open the Center for Post-Covid Care for patients recovering from the virus. At the time, Mount Sinai had treated more than 8,000 patients who had been diagnosed with Covid-19.

“Barbara was instrumental in forming the center,” Dr. Charney said, “and she was involved in the follow-up as it related to kidney disease caused by Covid.”

In addition to her husband, Dr. Murphy is survived by their son, Gavin; her sister, Dr. Celine Murphy, a cardiologist who works in occupational health; her brother, Dr. Kieran Murphy, an interventional neuroradiologist; and her parents.

Dr. Murphy said she had learned an indelible lesson about the need for a strong patient-doctor relationship while still in medical school.

“Scholarship alone was not enough,” she said at the Irish America award ceremony. “An example: If we had a patient with rheumatoid arthritis and we shook their hands and they winced, it didn’t matter how much we knew about the disease or how to treat it, we’d failed our exam because we hadn’t taken the patient’s overall well-being into consideration.”