Could fathers be the missing link in baby sleep?

If dads did the brunt of the baby settling from the beginning, could we set ourselves up for better sleep sooner?

That’s certainly the message from Melbourne paediatrician Dr Daniel Golshevsky – also known as Dr Golly – who is calling for baby bassinets to be set up on the non-breastfeeding parents’ side of the bed from day one so that dads become the go-to “settler” whenever baby is not hungry. 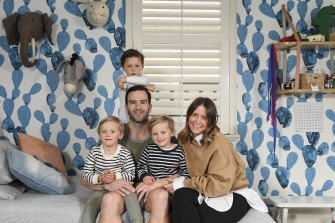 Lucy and Jordan Lewis with their sons, twins Ollie and Hughie, and Freddie. They followed a sleeping method for the twins recommended by Melbourne paediatrician Dr Daniel Golshevsky with great success.Credit:Penny Stephens

“Aside from breastfeeding, there is not a lot that dads can’t do,” he says.

“When baby comes off the breast, the winding, nappy changing, interaction and tummy time can all be [shared] by dad. If the baby is fed by bottle, then dad can be part of it all.”

As effective a soothing tool as breastfeeding can be, Golshevsky says that there can be a risk of setting up a feed-to-settle pattern, which can become draining.

By getting dad more involved in settling, not only does Golshevsky predict a far better sleeping baby, but he says science shows there will be improved dad-baby bonds and a lower risk of paternal postnatal depression.

While many partners who are primary breadwinners may fear that tiredness from tending to a baby overnight could compromise their career performance, Golshevsky says that overnight settling from dad should only last for a short period of time before baby learns to self-settle, resulting in better sleep for the whole family long-term.

“I completely understand there are challenges involved but what I would rather see is parents working together as a team … then everyone reaps the benefits,” he says.

“Getting through six weeks with broken sleep is manageable, the problem is when you have got to do it for months and months.”

Getting on the same page

One of the challenges for parents with problem sleepers of any age can be working as a team to formulate a plan when you’re exhausted. That’s something parents Lucy and Jordan Lewis experienced firsthand when their twins, Ollie and Hughie, were two years old and still waking multiple times a night.

While Jordan was always very hands-on with baby caring, the fact he was a professional AFL player who relied on sleep for recovery and game preparation, meant Lucy felt she had to do a lot of the overnight settling, and often they disagreed on sleep strategies.

“I would go to sleep and be anxious about who would wake up,” she recalls. “As soon as I heard a sound or movement, I’d be quick to run in, which made it worse.”

Jordan says being up many nights in the week led to a horrible “hungover” feeling.

For the Lewis’, it was watching Golshevsky’s video tutorials online together that helped them find a mutually agreeable plan.

Ultimately they realised they’d been lacking a consistent nightly wind-down routine and effective re-settling techniques. They also introduced white noise and a clock that signals day and night, as well as a reward chart for sleep-throughs and two years later are still having sleep success.

“From 5pm it’s dinner time to bath time to reading and having their own space before they go down to sleep at night,” Jordan says. “It’s become a beautiful finish to the day that I can be involved in – it’s nice for [as a father] me to have a connection to the boys from a calming point of view.”

Dr Golly believes that a lot of toddler and older children’s sleep problems could have been prevented in the first place if parents had learnt to understand their baby’s cues.

He says differentiating between an “escalating” cry, which gets louder and more intense and needs to be attended to, and a “de-escalating cry” or “fussiness”, which is characterised by longer gaps between cries, is the missing link.

“If the baby is grunting, hiccupping or thrusting their tongue, that’s a loud message that they have wind and need to be burped – not fed,” he says. “If the cries are becoming softer, you can be reassured that the baby is in the process of self-settling.”

Professor Harriet Hiscock, paediatrician and spokesperson for the Sleep Health Foundation, agrees that the more dads and partners can be involved in caregiving the better, but she says it’s important that mums don’t feel pressure not to feed in early days.

“Under six months, it’s completely normal for babies to wake overnight and breastfeed, and after six months it’s fine [to continue feeding at night] if parents want that,” she says.

Professor Hiscock says each family will need to find their own path to baby settling and sleeping because everyone’s work commitments and family dynamic is different.

“It boils down to family choice – there is no right or wrong way,” she says.

“Some parents are happy to keep feeding children to sleep when they are two or three, while other parents say, ‘No I’m really tired, it’s affecting my mood or mental health and I don’t want to do that’.”