As a parent, getting your kids vaccinated might not be a simple call 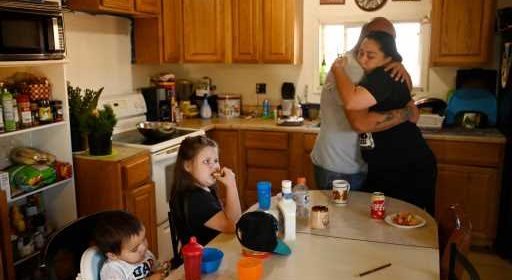 If Alejandra Castañeda had her way, her daughter Violeta would get vaccinated against COVID-19  as soon as possible.

The Denver mother said she’s worried about the 11-year-old missing school if Violeta gets sick. She’d also like to take her child to see their out-of-state family.

But Castañeda’s ex-husband, Greg Benchwick, initially wasn’t sure whether he wanted his daughter to get immunized immediately. He said he wanted more evidence the shots won’t cause serious and lasting side effects in children her age.

Colorado began vaccinating children ages 5 to 11 against the coronavirus on Wednesday after the U.S. Centers for Disease Control and Prevention gave its go-ahead and ushered in what President Joe Biden called “a turning point in our battle against COVID-19.”

But as the state launches its campaign to administer shots to the 479,895 Coloradans in that age group, it faces parents wary of giving their consent.

Many parents who spoke to The Denver Post, like Castañeda, view the arrival of the vaccines for young children with anticipation, having spent months worrying about their kids becoming sick and transmission of the virus disrupting in-person learning at schools.

Other parents aren’t quite ready to get their children immunized over concerns about potential long-term side effects. Those parents don’t necessarily dismiss COVID-19 vaccines outright and they may be inoculated themselves.

Parents’ hesitation presents a challenge to Colorado public health officials’ stated goal of immunizing at least half of children ages 5 to 11 by the end of January.

“I’m not surprised,” Dr. Matthew Daley, a pediatrician and senior investigator for Kaiser Permanente’s Institute for Health Research, said of the hesitancy. “Parents — they’re always going to want to do what’s best for the child. They may be more risk-averse about their child.”

Colorado public health and medical experts said Pfizer’s COVID-19 shot — the only vaccine approved for use in young children — is safe for those between the ages of 5 and 11.

“The scrutiny these vaccines are under from our regulatory agency is pretty intense,” Dr. Lalit Bajaj, a pediatric emergency medicine physician at Children’s Hospital Colorado. “We wouldn’t put it out there if we didn’t think it was safe and the benefit didn’t outweigh the risk. There’s a lot of hope for optimism.”

The arrival of a COVID-19 vaccine for young children comes at a critical time in the pandemic in Colorado when cases are rising as they did a year ago and state officials are concerned the approaching holidays and flu season could place further pressure on hospitals, which they warned could reach capacity by the end of the month.

The latest surge in cases started this summer when children returned to school, spurring an increase in infections among adolescents. Children continue to make up a large proportion of COVID-19 cases in Colorado, according to the state health department.

“I have a lot of emotions about the vaccine,” said 8-year-old Noah Carey, who will get his first shot later this month. “A lot of very unpleasant emotions… of feeling scared to get this because I don’t like needles. But it is the only way it can inject in my system.”

Children are less likely to experience severe cases of COVID-19 that can lead to hospitalizations, but risk from the disease exists, according to medical experts. Young children can be vulnerable to developing a rare but potentially deadly condition called Multisystem Inflammatory Syndrome, or MIS-C, after a coronavirus infection. The condition can cause the heart, lung, kidneys and other organs to become inflamed, according to the CDC.

Children can also become what are known as long-haulers, with symptoms and after-effects that can persist for weeks or months.

Additionally, children can spread the virus to others, including to people with a higher risk for complications, according to officials from the Colorado Department of Public Health and Environment.

“Getting our children vaccinated now is an important thing we can all do before gathering with our families over the holidays,” Dr. Rachel Herlihy, the state epidemiologist, said in a statement following the CDC’s approval of the shots on Tuesday.

Parents worry about vaccine side effects

Brittney Montoya, of Manassa, said she was apprehensive before she received two shots of Moderna’s vaccine in the spring. Still, she heard Conejos County officials had extra doses that were about to go to waste and decided that “if they are going to test it on anybody, then they can test it on me,” she said.

But Montoya, 35, said she did not like the mobile clinic where she received her shots. She said she thought it would be safer to get vaccinated at the family’s doctor’s office where physicians and nurses are more familiar with a patient’s medical history and can make  a more informed decision on whether a person should get a shot.

“I can’t do that with my kids,” she said of taking them to a mobile clinic. “They’re used to their doctor.”

So, Montoya, who has five children between the ages of 2 and 13, remains undecided on whether to get her four eligible children vaccinated, saying she will wait until the family’s doctor gets doses before making a final decision with her husband.

One third of American parents plan to wait and see how well the COVID-19 vaccine works before inoculating their young child, according to an Oct. 28 poll by the Kaiser Family Foundation.

Parents surveyed cited safety as one of the leading reasons why they are still unsure about the vaccine for their child.

Benchwick, the father of 11-year-old Violeta, said he worried that the size of the Pfizer vaccine trial, which studied the safety of the shot in about 3,100 young children, wasn’t large enough to catch side effects. He would prefer to wait until two million shots have been delivered to the age group to see how they work, he said.

The vaccine study may appear small, but it is actually larger than normal for such a small age group, said Daley, the pediatrician at Kaiser Permanente.

Montoya said she is also concerned about potential side effects, especially because high blood pressure and diabetes run in her family. She is particularly concerned about the potential risk of myocarditis, a condition that inflames the heart and has been reported in some older patients after receiving a vaccination.

Daley and Bajaj, the Children’s Hospital physician, said younger children are at a greater risk of developing myocarditis after a COVID infection than from the vaccine.

“What we are finding is natural COVID in kids can cause severe disease, especially heart disfunction,” Bajaj said. “Anything related to the vaccine is much rarer and even if it does occur it is very mild.”

The study of Pfizer’s vaccine in children ages 5 to 11 found that the age group was less likely than teens or young adults to experience the typical immediate but temporary vaccine side effects — such as fever, fatigue and headache.

The difference could be because the children’s dose is lower, said Bajaj, who served as the executive sponsor of the trial at Children’s Hospital that examined Pfizer’s vaccine in young children.

The vaccine available to children ages 5 to 11 still involves two shots, given three weeks apart, but in lower doses. The age group is given 10 micrograms rather than the 30 micrograms that people 12 years and older receive, according to the U.S. Food and Drug Administration.

Montoya said she’s not opposed to vaccines. Her children have received others, including this year’s flu shot, and she encourages adults to get immunized against the coronavirus, but she wants more time to decide whether to vaccinate her children because they are homeschooled and have less exposure, she said.

“I trust the science, I do,” Montoya said, adding, “I just want to be sure what they are giving them is going to protect them and not cause anything else.”

“I hope everyone out there gets their vaccine”

Other parents, including 8-year-old Noah’s mother, have already booked appointments for their children to get the vaccine.Vanessa Vargas, of Westminster, reserved a slot on Nov. 14. for Noah to get his first injection.

Once Noah gets vaccinated, he wants to go to the public library and Disneyland, he said.

“I hope everyone out there gets their vaccine, too,” he said. “And I wish great happiness to everyone throughout these dark times and I’m very sorry to the people who have been vulnerable and have died to this virus.”

Paul McPherson of Westminster also is comfortable getting his 9-year-old daughter vaccinated. He said his father and aunt were given polio shots by Dr. Jonas Salk, the man who developed one of the world’s first successful polio vaccines.

“I believe in the system,” McPherson said.

Over the past few days, Benchwick and Castañeda kept talking through their differences, and ultimately came to a compromise, deciding to have Violeta vaccinated at her upcoming annual checkup this month.

“I still feel like the right thing is waiting,” Benchwick said. “But I saw how important it was for (Castañeda) and we decided to compromise. That’s what you have to do when you’re co-parenting.”