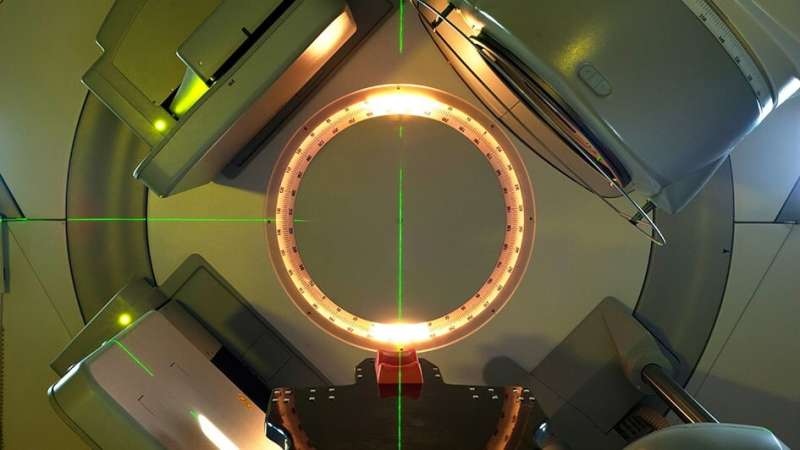 An advanced radiotherapy technique can be used to safely treat prostate cancer patients in as little as one to two weeks, compared with the current standard, which takes one to two months.

Findings from the PACE-B trial, led by researchers at The Institute of Cancer Research, London, and The Royal Marsden NHS Foundation Trust, show that, after a two-year follow-up, serious side effects were very rare when using the new technique—with only around 5% of people experiencing moderate bowel and bladder side effects

The technique, known as stereotactic body radiotherapy (SBRT), involves directing radiation at the tumor from many different angles.

The study was published in The Lancet Oncology.

The current standard, intensity-modulated radiation therapy (IMRT), delivers smaller doses of radiation in more sessions and over a much longer period of time, taking up to two months.

Researchers hope using SBRT to deliver radiotherapy in fewer sessions will become the new standard of care for prostate cancer patients, if further findings from the PACE-B trial—expected next year—confirm cure rates are comparable to the current standard.

SBRT would shorten radiotherapy delivery by three-quarters—which would mean fewer hospital visits for patients, allowing them to return to their normal lives sooner and reduce the pressure on the NHS.

The PACE-B trial involved 874 patients with prostate cancer across 35 treatment centers. The aim of the radiotherapy treatment was to cure patients, with no further treatment planned. In this part of the trial, researchers were comparing the side effects of the new SBRT technique and standard radiotherapy over two years.

Out of 874 patients, 441 received the current standard of care—consisting of 39 doses of radiation over eight weeks, or 20 doses over four weeks. The remaining 433 patients were treated with SBRT, receiving five doses of treatment over one or two weeks.

Moderate side effects are those classed as bothersome—they may interfere with some daily activities or require some medicine or treatment, but are not dangerous or life-threatening. There were no serious side effects or treatment-related deaths.

The PACE-B trial, involving 35 centers, was coordinated through The Institute of Cancer Research Clinical Trials and Statistics Unit (ICR-CTSU), which leads the design, conduct and analysis of phase II and III national and international cancer clinical trials.

The findings also pave the way for further research investigating whether we can use SBRT to shorten radiotherapy schedules even further in the ongoing ICR and Royal Marsden-led HERMES trial—potentially only needing two radiation treatments in a single week.

‘A smarter and better radiotherapy technique’

The trial’s Chief Investigator, Professor Nicholas van As, Medical Director of The Royal Marsden NHS Foundation Trust and a Reader at The Institute of Cancer Research, London, said, “Our latest findings should reassure patients who are part of the trial, as they suggest using SBRT to give radiotherapy in fewer but larger doses does not significantly raise side effects or negatively impact their quality of life.

“We hope SBRT, which allows us to target tumors much more precisely and effectively, will become a smarter and better radiotherapy technique for patients with prostate cancer across the U.K.”

A huge difference to patients

Study co-leader Professor Emma Hall, co-director of the Clinical Trials and Statistics Unit at The Institute of Cancer Research, London, said, “We are continuing to follow patients involved in the study so that we can make sure that, as well as being safe, the shorter SBRT treatment gives similar cure rates to the current standard radiotherapy. If that is the case, then SBRT is likely to eventually become the new standard of care for prostate cancer patients choosing radiotherapy.

“Attending five radiotherapy sessions over one or two weeks instead of 20 or 39 sessions over months could make a huge difference to patients’ lives.”

‘Without significantly increasing side effects’

Study first author Dr. Alison Tree, leader of the Uro-oncology Clinical Trials team at The Institute of Cancer Research, London, and Consultant Clinical Oncologist at The Royal Marsden NHS Foundation Trust, also leads the HERMES trial. She said, “We expect the vast majority of these prostate cancer patients, around 85 percent, to be cured by radiation alone—with no signs of cancer five years after treatment.

“In this study, we have shown that we can safely increase the daily dose of targeted radiation, which allows us to treat patients in fewer sessions overall without significantly increasing side effects.

“PACE-B demonstrates delivering five doses in a matter of weeks is safe, but it has also paved the way for a separate trial, which is already looking at using this advanced technique to treat patients in just two sessions of radiotherapy.”

‘I feel I made the right decision’

SBRT can be delivered using CyberKnife or standard radiotherapy machines, allowing clinicians to target tumors to sub-millimeter precision. After being diagnosed with prostate cancer in April 2011, Peter Ketteringham, 80. from Hampton, Middlesex, was one of the first patients in the U.K. to be treated with CyberKnife.

He had been offered a variety of options by his clinical team, including surgery and conventional radiotherapy, but opted to be referred to The Royal Marsden for this new treatment, where a CyberKnife machine had been recently installed. Over eleven years on, Peter is still cancer-free.

He said, “CyberKnife seemed to offer the best balance between overall effectiveness and the minimization of side effects. To this day, I feel I made the right decision. Obviously there was little UK data at the time to compare it to conventional radiotherapy but, to me, it seemed logical that CyberKnife offered more accuracy due to its finely focussed radiation beam, thus minimizing any harmful effects of radiation to my surrounding healthy tissue.

“I calculated that, including my journey to and from the hospital, the total time taken up by my CyberKnife treatment was 15 hours in five sessions compared to what would have been more than 80 hours in 37 sessions with conventional radiotherapy. The real proof of the effectiveness of the treatment came when I received my PSA reading of less than 2ng/ml immediately after the treatment. It is below 0.2ng/ml now and I have remained well since. I also experienced no side effects related to CyberKnife at all.

“It is wonderful to see how successful CyberKnife has become since I was treated. I feel really proud to think that, not only did my treatment help me, but enabled the team to shape new treatments for other patients.”