Abortions up 33% in Colorado, fueled by out-of-state residents seeking treatment 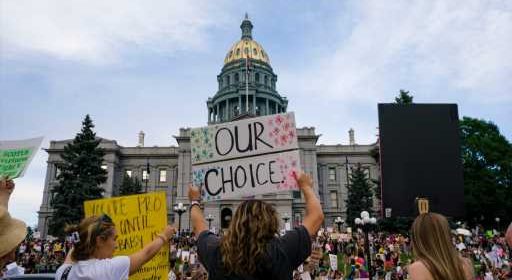 Colorado is among the states with the highest spike in abortions after the collapse of the landmark Supreme Court case Roe v. Wade, with abortions up 33% between April and August, according to a new Society of Family Planning report.

Abortion providers say they are seeing more patients from states where abortion has been severely restricted or outlawed.

Other states with increases include North Carolina at 37%, Kansas at 36% and Illinois at 28%, the report published Oct. 28 stated. California saw a small increase during that time period, already providing the most abortions of any state per month.

In April, patients had 1,450 abortions in Colorado, according to the report. In August, that number was 1,940. The report did not include numbers for self-managed abortions — medication abortions without clinical supervision.

The numbers weren’t surprising to Dr. Kristina Tocce of Planned Parenthood of the Rocky Mountains. Between June 25 and September 21, Planned Parenthood clinics in the region saw an 18% increase in abortion services, and since the U.S. Supreme Court’s Dobbs v. Jackson Women’s Health Organization decision, 38% were patients from out of state. Before Dobbs and the 6-week abortion ban that took effect in Texas, it was about 11%.

“Part of my medical practice now is knowing patients’ travel itineraries, so I can stick to flight times,” Tocce said, noting that some patients fly in and out on the same day.

Other times, patients drive to Colorado clinics, even without having appointments, waiting in their cars for cancelations. The wait times for appointments have increased, with some patients having had to wait 23 days for abortions, which Tocce called “horrific” for such time-sensitive care. The wait has now decreased to about two weeks as Planned Parenthood clinics are working to add hours and staff.

Cobalt’s Abortion Fund, which helps patients with the costs of abortions as well as travel, lodging and other expenses needed, saw its caseload triple the day Roe v. Wade fell, according to its manager Amanda Carlson. Two-thirds of the fund’s clients are from Texas.

“That day, we became travel agents overnight for abortion seekers,” Carlson wrote in an email.

Between January and September of this year, the fund provided money for abortions for more than 1,000 people — about $371,000 (compared to historical spending of about $200,000 per year). The fund also disbursed $187,000 in travel support, which includes money for flights, gas, meals and child care, 94% of which was spent after Roe fell.

Colorado passed a law this year guaranteeing the right to abortions without gestational restrictions, codifying what was in practice into state law.

The state has had some infrastructure in place for people coming from outside the state to get abortions, but the practice has increased exponentially since the Dobbs decision, said Dr. Benedict Landgren, an OB-GYN who has specialized in providing later-term abortion care.

Landgren cited the story of a patient who sold her car for a bus ticket to Colorado and showed up at the front door with her luggage from another state where she couldn’t get an abortion at that point in her pregnancy.

“Colorado is meeting the demand and I know that I have many colleagues who are working very hard to meet that demand and who are very tired,” he said. “And abortion infrastructure will need to expand. New clinics will need to open, support will need to be sustained … until we can secure people’s right to access abortions with dignity and close to home.”

Planned Parenthood has closed some clinics since the Dobbs decision, including in Steamboat Springs, but Tocce said the nonprofit has allocated those resources instead to clinics that are more centrally located or see more patients. Clinics are also using more telemedicine options for patients who don’t need in-person appointments to make room for those who do.

The goal is to help as many patients as possible who are able to access abortion care, Tocce said, but it’s hard for her to fathom that in 2022, so many states are severely restricting or banning abortions going against medical evidence.

Some people will either seek care outside of official health care systems or continue pregnancies they would not have otherwise, she added.

“We’re really right now seeing the very beginnings of how this is going to affect patients, providers, and it’s really going to cause so much harm,” she said.

For Tocce, one part of the report really stood out to her. She already knew that certain people and communities would be disproportionately affected, but reading that the decline in abortions happened in the state with “the greatest structural and social inequities in terms of maternal morbidity and mortality and poverty” was staggering to her.

Marginalized communities who need that access the most can’t afford it, the report stated, noting that research has shown those who can’t get a wanted abortion experience negative outcomes for years, including “economic insecurity, poorer physical health, and continued exposure to violence from the man involved in the pregnancy.”

There are a variety of reasons people choose to have abortions for both wanted and unwanted pregnancies, one of which includes the safety and well-being of the mother, and restrictions in other states make that impossible for some. Tocce recalls a patient who came to her for an abortion because the patient was diagnosed with reoccurring cancer that needed radiation and chemotherapy treatment immediately. But that couldn’t start until she had an abortion, and it was past the time she could get one in Texas.

“I was so frustrated and angry for this patient to be diagnosed with something so scary and to have to navigate that diagnosis and treatment plan, and having small children depending on you … and then to have to figure out logistically, financially time away (to have the abortion),” Tocce said.