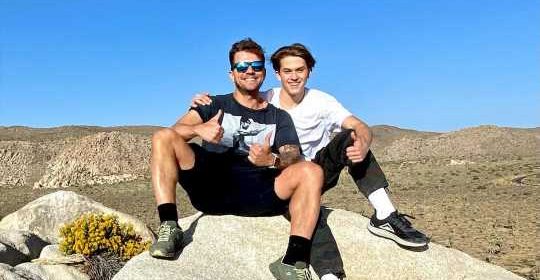 Ryan Phillippe is teaching his son Deacon Reese to keep an open mind.

During the actor's Tuesday appearance on Live with Kelly and Ryan, he discussed his starring role on the upcoming ABC drama Big Sky and a surprise "short road trip" to Joshua Tree National Park that he and his son recently embarked on in celebration of Deacon's 17th birthday.

"We did some rock climbing and this and that. I had rented an alien-themed Airbnb and then revealed to him that the actual intent of our trip was to try to make contact with alien civilization," said Phillippe, 46.

"Oh my gosh, did you?" asked Kelly Ripa excitedly.

"We didn't," admitted Phillippe, explaining that he and his son were initially looking forward to leveraging an app that's "supposed to take you through steps that increase the chances of making contact." Reese Witherspoon Shares Photo of Her Son Deacon Driving Her Because She's "Tired": "Love My Kid"

"The problem is we went too deep into Joshua Tree and lost signal," he added, laughing alongside Ripa, 50, and co-host Ryan Seacrest. "So we couldn't use the app."

But the trip was still more than satisfactory for the pair. "We did lay out — in the middle of the night, we laid in the rocks and had a great father-and-son bonding moment. But no alien contact," said the Cruel Intentions actor.

Deacon, a newly minted music producer, and his dad have also bonded over music in the past, having attended the Firefly Music Festival together last year and sharing an affinity for one genre in particular: hip hop.

"We were doing a road trip to Yellowstone a couple years back and the new Travis Scott album at the time, Astroworld, had just come out," Phillippe recalled of the music they'd both been "really anticipating."

He added, "So our first listen was on this road trip as we're passing the most beautiful, enormous mountains on our way into Yellowstone. And that's something that I won't forget." Deacon rang in his Oct. 23 birthday with lots of love from his family, surrounded by both his dad and mom, Phillippe's ex-wife Reese Witherspoon. (The two also share daughter Ava, 21, while Phillippe is dad to 9-year-old daughter Kai and Witherspoon is mom to son Tennessee James, 8.)

"Can't believe he is 17!" Witherspoon, 44, wrote on her Instagram Stories alongside a recent picture of Deacon.

Calling him her "adventure-loving travel buddy," the actress also included a picture of the mother-son duo from a previous trip together, and went on to share a separate tribute post to her Instagram feed.

Phillippe also paid tribute to Deacon on his Instagram Stories. "Happy birthday to my extraordinary son🌞," the actor wrote alongside a picture of the teen standing by a sunset.