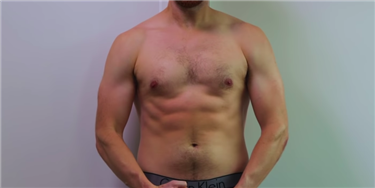 After recovering from several knee surgeries, Ned from YouTube’s Try Guys embarked on an ongoing mission to improve his health and personal fitness. “I want to feel strong, I want to feel healthy,” he says in his latest video. “What better expression of that than getting a hot, shredded bod?”

While stuck in lockdown, Ned resolves to get fit, with the specific goal of working on his abs and developing a six-pack in a six-week period.

When it comes to exercise, part of the challenge is that it has to fit into Ned’s existing daily routine, so JP prescribes high-intensity workouts that only last 30 to 40 minutes.

One of the toughest adjustments of the challenge for Ned at first comes from the nutrition side. “The diet has been so hard,” he says going into week 2. “I am not the type of man that can just eat a fist of pasta and call it a day! I have no idea how to make salads!”

By week 3, however, he is encouraged by the results he is starting to see, and by his overall improved mood. He is also spurred on in his workouts when he starts participating in live-streamed, fat-burning HIIT sessions. “I feel like a gym is a really good community, and doing it remotely on a conference call is a way to stay connected,” he says. “Also, I think I work harder and sweat more.”

That energy drops off in week 4, however . “I saw this initial spurt of changes and increased confidence just from exercising, but since I’m not doing the diet, I’m not seeing additional changes.”

Ned decides that the only way he’s going to see the results he wants is to double down on the nutrition (abs are made in the kitchen, after all), and his progress looks up as he heads into week 5, with the semblance of a “four-pack” on show. His endurance in the exercises has also improved, and he is able to get through a cardio workout and a core-busting plank hold without breaking. “I feel the need to really go hard these last two weeks,” he says.

At the end of the 42 days, Ned’s stomach is considerably flatter, with visibly toned abs. “I don’t actually look that different, but I’m more defined, and more muscular,” he says. And perhaps just as importantly as the visible results, he feels good about how the experience will stand him in good stead for the future.

“Doing this for six weeks really made me build healthy habits,” he says. “The challenge ended, and the next day I still exercised. It became a really fun part of my morning.”