Researchers use genetic profiles to predict obesity risk at birth 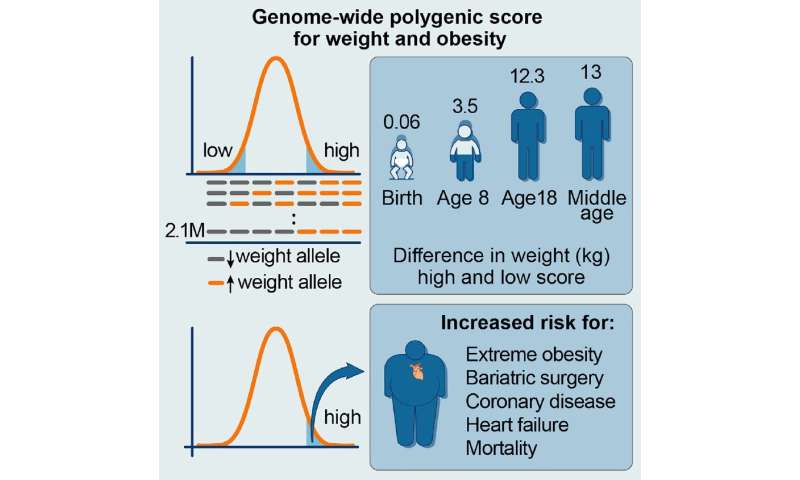 Researchers have come up with a scoring system based on genetic markers that predicts an individual’s inborn risk for obesity. Using data from the largest existing genome-wide study of obesity, they applied new algorithms to integrate information from more than two million genetic variants affecting body mass index (BMI). The resulting score accurately predicted BMI and obesity in more than 300,000 individuals spanning birth to middle age. The work appears April 18 in the journal Cell.

The study also revealed that some people are much more susceptible to obesity than others: those scoring in the top 10 percent were 29 pounds heavier on average than those in the lowest 10 percent and were 25 times as likely to develop severe obesity. The impact of the score started to become discernable at around age 3.

“The score is associated with only minimal differences in birth weight, but it predicts clear differences in weight during early childhood and profound differences on weight trajectory and risk of developing severe obesity in subsequent years,” says senior author Sekar Kathiresan, director of the Center of Genomic Medicine at the Massachusetts General Hospital and the Cardiovascular Disease Initiative at the Broad Institute.

While the score is not a perfect predictor—some with a genetic predisposition never become obese—the researchers contend that genetic profiles can help identify high-risk individuals and help doctors recommend ways to avoid potential health risks associated with a high BMI before they materialize.

Prior studies suggest that the impact of an unhealthy diet and a sedentary lifestyle on BMI are most pronounced in those with a genetic predisposition. “The ability to identify high-risk individuals from the time of birth may facilitate targeted strategies for obesity prevention with increased impact or cost-effectiveness,” says co-author Amit Khera, a postdoctoral fellow in the Kathiresan lab.

“We have always had a hunch that some people may have been born with a genetic profile that predisposes them to obesity, and we now confirm that this is both true and quantifiable,” he says. “Although complex conditions such as obesity and heart disease result from both genetic and environmental factors, this means DNA is not destiny.”

“We previously demonstrated that a healthy lifestyle can cut the risk of heart attack in half, even among those with the highest genetic risk,” Khera says. “This is certainly the case for obesity, where a healthy diet and exercise can offset a genetic predisposition. But it is also likely true that those with a high genetic predisposition have to work much harder to maintain a normal weight.”

Using a $50 genetic test called a microarray that detects variations and mutations among millions of genetic markers, researchers anticipate their scoring approach will one day predict genetic risk for a range of health conditions, such as heart disease, breast cancer, and atrial fibrillation. Interventions might include prescribing preventive cholesterol-lowering medication, lifestyle counseling, or using wearable technology, such as an Apple Watch, to detect irregular heartbeats.